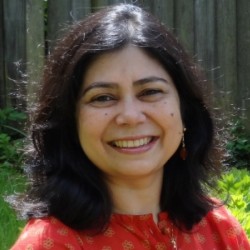 Shrabani Basu graduated in History from St Stephen’s College, Delhi and completed her Masters from Delhi University. In 1983, she began her career as a trainee journalist in the bustling offices of The Times of India in Bombay.

Basu has appeared on radio and TV in the UK and founded the Noor Inayat Khan Memorial Trust for a memorial for the Second World War heroine which was unveiled in 2012. She is the author of "Curry: The Story of the Nation's Favourite Dish," "Spy Princess: The Life of Noor Inayat Khan," and "Victoria & Abdul: The True Story of the Queen's Closest Confidant."

Rewriting the Empire: an interview with Shrabani Basu

Journalist and historian Shrabani Basu talks about filling the gaps in the history of colonial India’s relationship with Britain.

Amillion and half soldiers from undivided India were involved in the First World War. This is a figure that London-based journalist and historian Shrabani Basu, one of the more popular speakers at this year’s Galle Literary Festival, often makes a point of including in her public talks. All four books Basu has authored have tried to shed light on aspects of British colonial encounter with India that have been ignored in most readings of that history. In Spy Princess: The life of Noor Inayat Khan and For King and Another Country: Indian soldiers on the Western front 1914-1918, Basu looks at contributions made by officers and soldiers from undivided India in the two world wars. Her latest Victoria & Abdul: The True Story of the Queen’s Closest Confidant – an account of the close personal relationship between Queen Victoria and Abdul Karim, her attendant from India– has become a commercially successful film with two Academy Award nominations. Chhetria Patrakar met Basu for a short interview at the Galle Lit Fest. The interview has been edited for concision.

Chhetria Patrakar: Could you tell us how you transitioned from being a journalist to a historian?

Shrabani Basu: I’m still a journalist so I’ve not left the day job. I still work as a journalist. So that remains with me. The transition was very easy because I studied history in university. I love history. And even as a journalist I loved doing features which had slightly historical themes, apart from all the coverage one does. So it was quite easy for me. I naturally went in that direction.

And so with my love for history and being trained as a journalist, where we know how to dig up things, you know… I mean, that’s what we do. Researching in the archives is my historian’s training. But something like finding Abdul’s grave in Agra, which is not the work a historian would do, that only a journalist will do. Going to the trenches, that’s not what a historian will do, you know.

So I combine the two, because I have to be in the field. I cannot write by just looking at the archives. So I have to go to the areas. I went to Garhwal for this book For King and Another Country. I spoke to the family. You know, you have to get some things from oral history, which is not necessarily in the archives. So for me it’s very important to combine both.

CP: All three of your last books seem to be filling gaps in the histories of the colonial subjects. But these are all stories, not dry historical accounts. Is that something you’ve constantly been thinking about, rewriting the narratives of the colonial era?

SB: I went naturally in that direction because my life has been divided into having lived in India and having lived in the UK. And these are the two countries I am most familiar with. Thanks to the Brits, the one thing they did really well is keep records, which I find very frustrating in India. But in Britain, in the British Library and in private papers everywhere I get so much information that I can really dig up. So it had to be something about India and Britain, and it had to be about history. So everything I write is about the dead… I’ve spent half my life in graveyards and memorials and goodness knows what. But I enjoy that.

CP: I want to stick with the colonial aspect of the books a bit longer. You mentioned on stage how the centenary of the First World War was a reason why you wrote your book. And in recent years there have been a flurry of books about Southasian involvement in the world wars, by Raghu Karnad, Yasmin Khan, Srinath Raghavan…

CP: So, on the one hand you have more Southasian writers digging those histories. But you also have writers like Niall Ferguson or Andrew Roberts, a wave of historians doing apologetics of the colonial era, reframing it in a new post-9/11 world. Is that something that you have in mind.

SB: Well, they are there… they exist. There’s nothing you can do with them. Good luck to them.

CP: But even in India there is this kind of Anglophone nostalgia…

SB: I think there’s a difference between nostalgia for some good things, and in saying that it was right. It’s okay to be nostalgic about some food that might have come from the the UK, or steam trains, that’s absolutely okay. But [if Britain is] to stake a claim and say that you are what you are because we were there, that you owe us. Sorry, that doesn’t work for me.

CP: My impression about your readers in the West is that a lot of them are liberals who might feel some guilt in reading about their country’s history. But have you come across readers or audiences who believe the opposite, you know, saying that if we guys weren’t around you’d have no train tracks.

SB: No, I haven’t really. Most people who’ve come for mine have just been so fascinated by the stories. I think then they go on the guilty, you know, I feel so rotten about what we did. But then my stories aren’t black and white. I never have a tirade against, you know, even in the war stories. I bring out some of the human stories, and there are human stories on both sides, like the story of Sukha. He was rejected by his own countrymen, you know, our caste system and religious divisions. And he was buried by a vicar from a little church in England.

Since I’m not didactic, it’s all there. I write about how Indian patients were not allowed to have English nurses because they were scared. So I am writing everything that was wrong.

I mean let’s not forget in Indian independence movement, there were a lot of Brits who supported us. And we should not forget them as well. There’s a whole line of people who really went on putting pressure on the government. They were very opposed to Churchill. Nobody ever talks about them and we do need to talk about them too. They helped us in this fight. It wasn’t all of them who wanted a colony.

(Read Chhetria Patrakar’s account of the first day of sessions at the Galle Literary Festival 2018.)