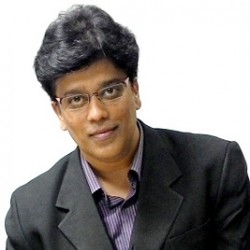 Sourabh Mukherjee is the bestselling author of psychological thrillers “In the Shadows of Death” and “The Colors of Passion”, “Romance Shorts”, a collection of dark-romance short stories,

“Beyond 22 Yards”, a 2-part series of books on the themes of Love and Crime from the world of cricket, and “It's All About Love”, an anthology of love stories.

His books have been highly appreciated by readers, bloggers and leading media houses across the country.

“The Colors of Passion” was long-listed in Word to Screen 2018, organized by the Mumbai Academy of Moving Image (MAMI) and was among Top 10 New Arrivals in Starmark outlets across India during the month of release.

Eminent literary website MyBookPick.com ranked “In the Shadows of Death” and “The Colors of Passion” among top Indian thrillers in 2015 and 2017 respectively.

Sourabh received the Golden Pen Award in the Monsoon Romance Contest 2014 organized by Sulekha.com and judged by an eminent panel of literary luminaries.

An Electronics and Telecommunications Engineer with a Post Graduate Diploma in Management in his day-job, Sourabh works as a Vice President in a technology multi-national.

Author of several publications on emerging trends in business and technology, Sourabh speaks regularly in various national and global conferences and sits on the Advisory Boards of several premier educational institutions.

A keen observer of human behavior and cultural diversities, Sourabh loves travelling and has travelled across USA and various countries in Europe and Asia.

An avid reader of fiction, Sourabh is equally passionate about photography, movies and music.

An Interview with Author Sourabh Mukherjee

We’re very pleased to introduce Sourabh Mukherjee today. Sourabh is an award-winning writer who recently published his debut novel entitled In the Shadows of Death. We interviewed Sourabh to learn more about the man himself and his work as an author. Read on to discover what he had to say.

Welcome to e-Books India Sourabh! Thanks very much for joining us for this interview. Please tell us about you. Where are you from? What is your professional background and how did you become an author?

I hail from the city of Kolkata in Eastern India.

An Electronics and Telecommunications Engineer, in my day job, I work in a senior leadership position in a leading global consulting firm. With several publications on emerging trends in business and technology, I have been a speaker in various national and global conferences and technology summits.

I have been writing for as long as I can remember. I have never really written for a purpose – it is just something I love to do. In my early childhood, I would spend hours writing, as well as making illustrations for my own stories. A number of my poems were published in children’s magazines back in the day. I continued to write through my teenage years and later in college.

I kept writing in office magazines for a couple of years, but the demands of my career as an Information Technology professional and my travels across the world soon left me with very little time and creative energy to write fiction.

However, as I travelled across the world, I grew as a person getting to observe people from widely varying cultural backgrounds and to study their emotions, their thoughts, and their behaviour from various perspectives. And stories began to grow all over again.

I started publishing my work with the popular e-books Nargis Through my Summers and Loves Lost. My short stories in various genres were also published in international e-zines like Romance, Under the Bed and eFiction.

In the Shadows of Death is my debut novel. A psychological thriller, set in the city of Kolkata, the story is a whodunit with an emotional core, which was published by Srishti Publishers and Distributors in December 2015.

During the three months since its release, the book has consistently been among the top sellers in various listings, including Amazon India’s listing of ‘Hot New Releases’ in its category along with international titles penned by authors I have idolized over the years.  An eminent writer and blogger has ranked it among 6 Indian books that broke stereotypes in 2015.

Readers and reviewers have loved the narrative, the non-linear storytelling, the characterizations, the twists in the plot, and most importantly the tragedy at the core. The book has been profiled by mainstream Indian publications like The Hindu, The Times of India, Business Standard, Yahoo! India News, Zee News, Hindustan Times, New Indian Express, The Free Press Journal, Tahlka News and Absolute India Tabloid among others.

In the Shadows of Death unfolds in the city of Kolkata, with Agni Mitra, Assistant Commissioner of Police, investigating into a series of murders of adulterous women, even as he has to battle storms brewing in his personal life.

The voice of the serial murderer, whose identity is undisclosed till the climax of the story, runs in a parallel track across the novel providing the reader with insights into the killer’s traits, his actions, and his emotions.

The detective is not portrayed as an infallible law enforcement machinery as most stories in this genre tend to do. He is a human being dealing with personal issues. The character of the serial-killer, on the other hand, is not uni-dimensional either, and a parallel track throughout the novel in the voice of the killer provides insights into the dark recesses of the killer’s mind.

And then, the novel creates situations where the paths of the investigating officer and the serial killer cross – not only as a consequence of the murder investigation, but also at an emotional level.

Are you working on any other books(s)? If so, can you please tell us what we can expect to see from you in the future?

I am currently working on the next Agni Mitra thriller ‘The Colours of Passion’ which would be released later this year. Agni is my attempt at creating a contemporary, relatable pan-Indian detective.It does not make me too happy to note that, whenever we speak of popular detectives in English fiction, we end up naming characters created by foreign authors.

With so much of quality fiction being written in India in the English language, where is that one pan-Indian character that is a brand by her or his own right and has instant recall? So, I asked myself, why not make a humble effort to create one in ACP Agni Mitra?

Can you please tell us about your approach to writing? For example, do you follow structures and writing rules? Or do you write in a free flow way? Do you have any particular time of the day you like to write? Or any specific environment you prefer to sit down and write?

Honestly, I do not follow a fixed routine when it comes to my writing.

I create a basic structure and chapter outlines and then I start writing the chapters with the basic premise in sight. And I let go, letting the sights and the sounds in my mind take over. It is, therefore, extremely important for me to be in the ‘appropriate’ frame of mind to write, irrespective of the time of the day or my surroundings.

I need to be in those situations myself.What I always hear from my readers is that they can visualize the scenes, and relate to the characters. And now you know why.

What other things do you like to do when you’re not writing?

I am a voracious reader of fiction myself.

Jeffrey Archer is an all-time favourite. I think he is an institution when it comes to storytelling – whether it’s his novels or his short stories. I have always been a big fan of Agatha Christie – mainly because of Poirot’s methods of psychological investigation, the witty repartees, and the human emotions at the core of the crimes.

Among more recent authors, I like the Alex Cross stories by James Patterson. I was floored by The Devotion of Suspect X and Malice by Keigo Higashino. I am also hooked to the works of Gillian Flynn. And I am an ardent fan of the Cormoran Strike novels by Robert Galbraith (J. K. Rowling) mainly because of her superior storytelling and also because she manages to transport me to one my favourite cities, London.

When I am not reading, I listen to Bollywood music – I have favourite songs for every mood, or watch movies in any language whatsoever from my huge collection.

And when I travel, I love being close to nature. As I travel all over the world thanks to my day job, you are more likely to find me in a park or by a river or trudging up a hill than in a shopping mall – Kensington Gardens any day over Harrods.

From your experiences, could you please share 2-3 top tips to help new authors who want to publish a novel?

It is important to create real, identifiable characters in a story. Correct use of the language is essential. An author should ensure that a story progresses at a uniform pace – a story that slows down after an energetic start is a big let-down for me. Finally, it is not about the length but always about the impact of a story. I have read 1-page stories that have left me thinking for days.

How can people find out more about you?

People can find out more about me at:

My blog is at http://mukherjeesourabh.blogspot.in

The book page for In The Shadows of Death is: www.facebook.com/intheshadowsofdeath

There is a book trailer at: https://www.youtube.com/watch?v=cPT-IQ5-2K0