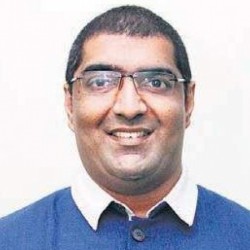 Shubha Vilas is a Tedx speaker, lifestyle coach, storyteller and author. Ramayana: The Game of Life is his bestselling series. He’s also written Open-Eyed Meditations and The Chronicles of Hanuman.

The focus of his work is the application of scriptural wisdom in day-to-day living, addressing the needs of corporates and youth through thought-provoking seminars. He has delivered more than 4000 lectures across the globe. He is also a visiting faculty at the Indian Institute of Management.

Shubha Vilas, the author of Mystical Tales for a Magical Life, is a TEDx speaker, lifestyle coach, storyteller, and author. He studied patent law after completing his engineering degree but, finally, chose the path of a spiritual seeker.

He’s a simple person who believes in a simple lifestyle. He has a degree in electronic engineering plus a degree in patent law. But he calls himself a storyteller and a motivational speaker. His passion is to inculcate in children, education that builds character. He has created Value Education modules which can be incorporated by schools and colleges into their existing syllabus. For students of IIM and IIT, He delivers leadership modules based on Ramayana. As an author and corporate speaker, his effort is to spread knowledge that leads to shaping the human aspects of his audience, to give them food for thought and inspire their highest aspirations.

‘Ramayana: The Game of Life’ is his bestselling series. Shubha Vilas is also the author of Open-Eyed Meditations and Perfect Love: 5.5 ways to a lasting relationship. The focus of his work is the application of scriptural wisdom in day-to-day living, addressing the needs of corporates and youth through thought-provoking seminars.

He has delivered more than 4000 lectures across the globe. He is also a visiting faculty at the Indian Institute of Management.

TBE: Tell us about your book, can you share with us something about the book that isn’t in the blurb?

Shubha Vilas: This book was written with one aim in mind, to show the world that the Vedic epics have much more magic, mysticism and adventure than even Harry potter or any other book of adventure that has captured young minds today.

TBE: What brought about the idea for Mystical Tales For A Magical Life and why did you want to write it?

Shubha Vilas: When I read the Puranas, I go into a magical world myself and I always wanted to share this feeling with the younger audience who would love these stories but don’t have access to it. The book was written only to share the experience of pulsating adventures from our scriptures.

TBE: Which is your most favorite story from your book? and why?

TBE: What was your writing process for this book?

Shubha Vilas: As a person, I don’t follow any processes. I go where my instincts take me and that’s how I write my books too. But I did a lot of research first, selected the stories I love, pondered over what lessons the stories are conveying to the audience of kali yuga and then took off.

TBE: During your journey from the idea of this book to the publication, what was the most difficult thing you faced? Is there anything you find particularly challenging in your writing?

Shubha Vilas: The challenge is in keeping the content relevant to our modern lifestyle. It is important to keep the readers’ world view integrated with the writing.

TBE: What do you hope your readers take away from this book?

Shubha Vilas: All I’m hoping for is that I arouse the curiosity of the readers enough to inspire them to explore our scriptures further and believe that we have a vast storehouse of knowledge handed down to us which is still applicable and relevant in our lives.

TBE: According to you What Is Mythology? And why it is important in shaping the society of the world today or in the future?

Shubha Vilas: Mythology is a misnomer. What we have with us is history. This history plays a pivotal role in shaping our society, our world and our future. Simply because this knowledge has stood the test of time and has been passed on to us through a link going back to Vyasadev and Krishna. The knowledge therein, is now verified and proved right by modern science.

TBE: Do you think, for both children and adults, understanding the mythology associated with one’s culture is important? Why?

Shubha Vilas: Culture of a person determines the mindset of a person. Culture of a nation determines the mindset of the nation. If you study the British Gazettes, you will be shocked to find that the Britishers have noted how much honesty, morality and integrity existed in India when the Britishers set into the Indian soil. This was simply due to the power of the culture that prevailed at that time. That culture was simply based on the lifestyle recommended by the Vedic scriptures. But unfortunately the British systematically dismantled all aspects of culture by making English education compulsory.

With Indians not having access to traditional sanskrit language, we lost access to our original manuscripts and had to only read English translations written by European scholars. These translations contained the story but sans the cultural aspect. Thus an entire generation grew disconnected to that culture. Thus we see India as a place that’s devoid of culture and thus devoid of morality, honesty and integrity. Bring that culture back in and everything will return.

TBE: Does Indian mythology, if interpreted without any bias, teach people to be more accepting of other cultures than Abrahamic mythologies?

Shubha Vilas: Vedic religion accepts every faith as genuine as long as the goal is to reach God. The essence is the same, details may differ. Never in the history of Vedic culture, has its followers attacked any country or religious places. Actions speak for themselves.

TBE: What are the main tenets where myths overlap modern scientific findings?

Shubha Vilas: Everything that science is proving now has already been mentioned in the scriptures of the past. We are slowly getting a reconfirmation of most of the facts that were simply believed. For example geography was always called bhugol which means earth is round, the anti septic properties of cowdung that science is accepting today has been a belief from time immemorial, embryology which is the science of the development of the embryo has been part of Srimad Bhagavatam ages back. There are unlimited such findings.

TBE: Do you read much and if so, who are your favorite authors?

Shubha Vilas: I love to read but nowadays it’s difficult to find time for leisurely reading. My reading is based on the book I am currently working on.

TBE: What do you like to do when you’re not writing?

Shubha Vilas: If not writing, then speaking at various events, and most importantly, thinking.

TBE: In your opinion, what is the most important thing about any book?

Shubha Vilas: Most important aspect of a book is the reader. If you don’t understand the pulse of your target audience, there’s no point in writing. Even more important is the satisfaction of the writer. If the writer is not happy with his work, no one will be.

TBE: What was one of the most surprising things you learned during creation of your book?

Shubha Vilas: Not just this book but as I write any other book, I am most surprised by ideas when they come. No one can think of ideas forcibly. Ideas come by grace. When they do come, every idea surprises you because its impossible to force them into being. When I get a good idea, I simply offer a silent prayer of gratitude. Because I know its not me.

TBE: A common misconception entwined with authors is that they are socially inept, and they are often associated with loner tendencies; is there any truth to that?

Shubha Vilas: I think that’s gross generalization. Authors are individuals with their distinct personalities. I, for one, love to be amongst people because that’s where I get my ideas from. Every interaction and every observation of humans triggers newer ideas about writing.

TBE: If you could tell your younger writing-self anything, what would it be?

Shubha Vilas: My advice would be ‘to chill’! Find your strength, your own style and enhance it further.

TBE: Is there anything you are currently working on that may intrigue the interest of your readers?

Shubha Vilas: I’m excitedly waiting release of my first series that I have written for children. If children read and like the series, it will give me a lot of satisfaction.