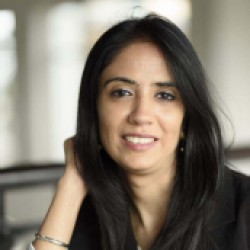 Ms. Smita Agarwal hails from Kolkata, West Bengal. As a child, her interests always steered away from academic studies and into creative art. She pursued honours in accountancy and after having graduated, she gave in to her passion for creative work. She ventured into the field of interior designing and received a diploma in computer-aided designing.

Smita also is an extremely knowledgeable and successful Pranic healer, an art she has been practicing for over 13 years. The continual study of Pranic healing is what led her into exploring the powers of the mind, and finally meeting Vikas Trivedi, the two of whom together wrote their debut book ‘The Hidden Spark’, which became a phenomenon. It received acclaim across India and abroad, and was featured in multiple media channels and newspapers.

‘Shaman in the City’, which is a gripping psychological thriller, is their fourth book together.