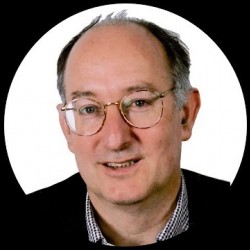 Dominic Lieven is a Senior Research Fellow of Trinity College, Cambridge University, and a Fellow of the British Academy.

His book Russia Against Napoleon (Penguin) won the Wolfson Prize for History and the Prize of the Fondation Napoleon for the best foreign work on the Napoleonic era.

Interview with Dominic Lieven, winner of the 2016 Pushkin House Book Prize for 'Towards the Flame'

Partly because of my family background. I had splendid, very extraordinary elderly relatives from Russia and grew up hearing the language a lot. My father had been in charge of the Russian service of the BBC. But my own spoken Russian was dreadful until I was a student. I went through essentially the same process as anyone other English-speaking student, and learnt it because I was obsessive. My PhD thesis was about the last two generations of the pre-Revolutionary elite. When I lived in Moscow and Leningrad as a PhD student, I looked on the Soviet Union as basically just an enormous obstacle between me and my archive. The security services followed me at first when I was researching, but they soon realised I was harmless and gave up on me.

What inspired you to write this book?

Above all, the First World War was crucial for Russia: most of the tragedies which happened in twentieth-century Russia originated from the decision to go to war in 1914. In recent studies of the First World War’s causes there has been a trend towards exonerating the Germans and assigning equal blame for the war’s outbreak to Russia.  My book reasserted the point that as regards responsibility for the outbreak of war in 1914, the Germans and the Austrians were overwhelmingly to blame. Second, before 1991 the Russian diplomatic and military archives were closed to foreigners. Their opening up made a huge difference to our understanding of Russian foreign and military policy. These archives were the last frontier for a historian of the war’s origins. Russia was the only country as regards the international crisis before WW1 where there was a vast treasure trove of documents not yet uncovered. Third, the war as understood in Britain is seen from a very skewed and to my mind mistaken angle.

What is your thesis?

This was above all an East European war: it stemmed from the collapse of the Ottoman empire and Austrian fear that their empire was going the same way. But more broadly a key cause of the war was the crisis of empire as a type of polity. Remember that at very moment the crisis of empire was tipping Eastern Europe into war in 1914, the same basic crisis was paralysing British domestic politics: this was the struggle between the British Empire and Irish nationalism. There are also important parallels between the Suez Crisis of 1956 and the July Crisis of 1914. In both cases an imperial elite facing geopolitical decline and nationalist challenges reacted with a combination of desperation, arrogance and miscalculation. I tried to inject my previous study of empire into this discussion of the origins of the First World War. Certainly the outbreak of war in 1914 was not inevitable but nor was it some accidental, freak event. The war was part of the broader struggle between empires and nationalisms that dominates much of twentieth-century global history. Making this point and putting the war in context was one important reason for writing my book. Another was that the opening of the Russian archives made possible a far fuller and more accurate understanding of Russian thinking and policy before 1914.  Previous interpretations depended on published documents which above all meant the memoirs of the foreign ministers and the correspondence of the embassies in Paris and London. Now the archives allow inter alia the views from the embassies in Berlin and Vienna, as well as those of other critics of the policy pursued before 1914.

Was it difficult to work in the archives?

I was only too aware that they could close at any time, for political or more practical reasons. My main archive, the diplomatic one, was subsiding rapidly into the Moscow metro and actually closed one week after I finished my research so I was forced to work in a very urgent and concentrated manner. My second most important archive was the military archive, situated in an eighteenth century palace that could fall down tomorrow, and was periodically closed because bits of roof collapsed or the ventilation system broke. I hadn’t realised that most of the material in the military archive for this period came in the form of Soviet 1960s microfilm of pre-Revolutionary handwritten documents. I have problems with my eyes (glaucoma etc) and also deep ear/ balance problems and my archival research almost finished me off. I began having fits but the heroic doctor who looked after me in the hospital wrote a 10 page denunciation to the archive saying I would die if not allowed to see the original documents which the military archive then kindly provided me with. Even so, I couldn’t read for a month after I got back to Britain and I could never again do archive research on manuscripts. But it was worth it. I worked in all in six Russian archives and amassed fantastic materials. Sometimes when working in an archive you  realise you’ve hit gold and want to run about in excitement. But on occasion I felt I was not just finding gold, this was pure platinum.

What was the best discovery you made?

If I had to pick just one, it would be a speech by Alexander Izvolsky, the recently appointed foreign minister, in 1907 to the state defence council, a secret gathering of the top Russian leadership. This document is in the military archive. Izvolsky was not just setting out his foreign policy, but also talking about grand strategy in the context of Russian history, culture and identity. The speech was immensely interesting and revealing about, for example, why in Izvolsky’s view Russia had to prioritise Europe and the Near East over East Asia. Izvolsky argued that the crises of the Ottoman and Austrian empires were coming over the horizon and that Russia could neither avert these crises because they were driven by deep internal political processes in the two empires issues nor stand aside because the issues involved were too enormous. In East Asia, on the contrary, not just were the stakes less but Russia could control events by negotiating with the Japanese.

What is the message of the book today?

One important point to make is to place the war in the broader context of global history. The struggle of empires and nationalisms is one of the really big themes in modern history. We are still living with the consequences of empire’s crisis and collapse. One big problem is that the ethno-national state which was empire’s nemesis was created in Western Europe and often doesn’t fit easily into other parts of the globe. Even in East-Central Europe it has taken two world wars, genocide and ethnic cleansing to turn the region into an area of nation-states. Part of the contemporary chaos in the Middle East stems from the fact that most of the former regions of the Ottoman Empire provided poor material for European-style nation-building. In most of the former Russian Empire, chaos and disintegration in 1917-20 was followed by the re-creation of empire in Soviet form. Now the USSR has collapsed and we face a post-imperial crisis there too. It is as if the British Empire had collapsed almost overnight in the 1930s when most British people still thought it was a fact of nature and basically a good thing. You would also need to throw in the secession of Scotland (Ukraine) and Wales (Belarus), the fall of the monarchy and parliamentary government plus an economic depression worse than the 1930s. It is not at all surprising that there has been a strong nationalist reaction in Russia. That also feeds into angst about where Russia is in the world, and a chip on the shoulder about never being fully accepted into Europe. Still one must be careful not to equate the situation before 1914 and now. For example, before 1914 Ukraine’s fate was a vastly importantissue: Ukraine was not just the place where Russian statehood and religion began; it was also the region where most of the Russian Empire’s coal and metallurgical industries was based, not to mention most of its exported grain. Without Ukraine, in those days Russia would have ceased to be a great power, in which case German domination of Europe, for better or worse, was probable. Of course Ukraine is still important and what its people are going through is a tragedy, but Ukraine is no longer nearly so crucial to European geopolitics and Europe is no longer at the centre of the world.

What is your next project?

My eyes won’t let me work in the archives any more. So I’m combining everything I’ve ever studied and thought about into a book about what it meant to be an emperor. This is a work reflecting on political leadership at the highest and most important level, across civilisations and millennia. I’m currently deep in Chinese history. Every book I read excites me, and makes me think differently. This week I’m reading poetry written by a seventh century Chinese emperor about how he understood his role and justified his power. Last month I was deep in the Abbasid caliphate. It’s like being turned on my head and shaken. The main risk is that I’m so engrossed in my thoughts that I’ll wander into the street and get run over.