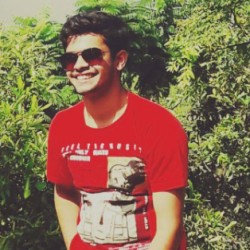 "Shubham Pandey is a fifteen-year-old boy, who is presently studying in 10th grade of The Bishop's School, Camp, Pune, India. Shubham is an avid reader and had also shown an interest in writing at an early age. He started writing short stories when he was in the second grade. When he was in the sixth grade, he had a dream sequence, which inspired this novel. He started writing this novel when he was eleven-years-old and completed it in about five months' time.

He titled it "The Book of James Carrom". Besides this, he is also a playwright, chess player, and musician. He has many plots in his mind, which he has already penned down and shall be completing in the near future. Due to the nature of his father's job (an army-man), he has seen various parts of the nation till date, and uses the landscape of these places in descriptions regularly.

His hobbies are playing the guitar and writing (stories and music). His list of 'favourite authors' is a really long list including, but not limited to: Jules Verne, HG Wells, Charles Dickens, Jack London, RL Stevenson, Alexander Dumas, William Shakespeare, RK Narayan, Roald Dahl, JK Rowling, Rick Riordan et cetera, and he names them as inspirations for his writing style. "