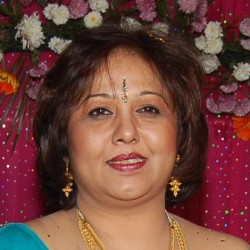 Ritu Lalit – Author of five books, A Bowlful of Butterflies, a coming of age story about three fast friends in school, HILAWI a fantasy thriller, and Chakra, Chronicles of the Witch Way, again a fantasy adventure, Wrong for the Right Reasons a story about a young divorcee bringing up her children and a murder mystery, My Father’s Mistress.

An Author Interview of Ritu Lalit with Smart Indian Women

Hi Ritu Lalit, thank you for agreeing to this interview. Tell us a little about yourself and your background? Please describe what the book is about.

Ritu :  I am a single mother, parent to two adult sons.  I also work at a 9 to 5 job.  I am fond of cooking and have a food blog.  I also have a personal blog.  I am also a published author with 5 books out in the market.  Currently I am writing two more.

Briefly, what led up to this book?

Ritu :  My latest book, Wrong for the Right Reasons is about a divorcee.  It arose out of a need to tell the story of countless women who, after divorce have become single parents juggling career, parenting.

It was born out of countless bonding sessions with the women I met while I was going through my divorce.  It is a view point that is seldom written about from the Indian context.

What was the time frame for writing this book?

Rituhere do your ideas come from?

Ritu : I haven’t a clue!  It just may be a situation, a particularly vivid dream or just a conversation.

Do you think that the title and cover plays an important part in the buying process?

Ritu : Sometimes.  Normally books are whole packages, the cover, the blurb, the title all play some part in the buying process.  As a writer, I’d like to think that the story is the main reason for buying a book.

Which writers inspire you?

What were your 1-2 biggest learning experience(s) or surprise(s) throughout the publishing process?

Ritu : The first surprise I got was when I got an acceptance from Rupa for my first book.

The second was the time it takes for a book to be published, the process is very slow.

Ritu : I have two manuscripts I am working on right now.

How can readers discover more about you and you work?

Excerpt from Wrong for the Right Reasons

You are rude, sarcastic and lack common decency.  You’re everything I want to be, everything I could have been.  Free, unencumbered and bold.  I love you, hate you and envy you, my soul sister.

Once out of their home, I paused under the mango tree in their front yard carpeted with dry leaves and failed to control my tears.  The house with its aroma of filter coffee, the smell of dose batter and coconut reminded me of my childhood, when I’d been sure of my place in the world.

I bowed my head and walked out of the gate with long strides blinded by my tears and walked into Uma, who had a helmet on her head.  She fell on the road as I staggered back, dropping my car keys.  She stood up, stared at me and blurted, “Oh my God!  You look like one of those Aunties, fat and shapeless.”

It stung.  We had not seen each other for years.  She could have been kinder.

“And you have specs and no tits,” I said, annoyed.

She removed her helmet and looked abashed.  “I am sorry; I did not mean to say that.”

By now I had finished looking her up and down; from her rubber flip flops, skimpy sleeveless tee shirt through which her bra straps peeped out, her threadbare jeans.  She wore rimless specs, a nose pin and

My mouth fell open as I focused on her mouth; that mouth belongs to advertisements involving fruit and fruit juices.  I could imagine a tongue snaking out of the mouth and licking the mango juice off the mouth with a sensual voice saying ‘lip-smacking delicious.

‘I had missed noticing it on her Face book profile; I’d been more interested in her male friends all of whom had tattoos and piercings that they flaunted for the camera.  One of them was drop-dead gorgeous too.

Two minutes in her company and I was as rude as her.  I gathered myself and said in a prissy voice, “How are you, Uma?”

“Is Gopal Uncle okay?” she asked, her face showing concern.

“Then why have you come here?  It can’t be to commune with the fossils.  Not your style.” she said.  I ignored the disrespectful reference to her parents and bent down to pick my car keys, conscious of my flabby thighs and hips.

Keys in my hand, I unlocked my car and got into it and slammed the door.  My hand trembled as I stuck the key into the ignition as she walked away.  Then her jibe sank in.  I put my head out of the window I yelled, “And what is my style?”

I shouldn’t have.  “Sleeping with losers is more your style,” she yelled back.

Uma knocked on the window and I waved her away.  She stuck her hand through the window, turned the door knob and pushed open the door.

“Mother?” she said.  “And you’re a drama queen, just like yours.  What a …” she said pulling me out of the driver’s seat.

She said, “Not bad, sounds better than cry-baby.  You were able to take leg pulling, I remember.”

I shifted to the passenger’s seat, pulled out an ass wipe from the baby bag kept under the seat and mopped my tears.

The car started at one turn of the key, bringing about a fresh bout of tears.  Even my car betrayed me.  She glanced at me, but kept quiet as she drove the car away from her parent’s place.  I looked out of the window, trying to master my emotions.  She was so confident that it aggravated them.

Manav said I lacked confidence and was cowed down by my mother.  This was after I mustered the courage to confront him about his affair, one year after finding that photo in his horrendous jacket.

I broke the silence, “Where are we going?”

“Somewhere we can drink beer and catch up without the whole neighborhood gaping at us,” she said.

It made me cry harder.  Once my marriage broke, our friends moved on.  I saw them on Face book partying with Manav and Nimmo.  Women friends went on shopping sprees with her.  I had not realized that I’d lose friends once the marriage broke, and I missed chilling with adults.

She stopped at the liquor shop, and I sank into the upholstery, praying that we would not be seen by any of our parents’ acquaintances.  She suffered no such qualms, and sauntered to the counter, picked up a six pack of Heineken, assorted snacks and cigarettes.

When I look back, I realize that it was her confidence, her free spirit I wanted.  My self esteem was gone, eroded by the fact that my husband preferred another woman.  For me, buying tampons and birth control pills at the pharmacy was hard.

Disgusted with myself, I got out of the passenger seat and got behind the wheel.  She pulled the tab off one of the beer cans, chugged it and slid into the car.  “Where to?” I asked.

She shrugged and drawled, “My place won’t do.  Your place?  We could do it in the car.”

Uma asked, “Milly, what’s happened to you?  You used to be such a sport.”

“Was I?” I wondered, snatching the can out of her hand gulping the chilled liquid down, bitter as my inner self.

That made me laugh, Ninja was our neighbor’s fox terrier, a yappy monster.  He’d bark all through the night.  After two sleepless nights I plugged his ass with a tampon.  He yapped his head off while straining to poop.  Exhausted with the effort of dislodging the plug, he had slept like a baby giving us a night of peace.

“We were thirteen, Uma,” I pointed out, but the tension around my shoulders eased and my mood lightened.  I drained the beer and picked up another.  We drove around the block.

She sipped her beer and lit up two cigarettes, “I did not marry the town slut.  Instead, I found myself a drop dead gorgeous Sikh in disguise.”

“Legalized prostitution,” she said offering me a lit cigarette.  “I’ve quit,” I said, grabbed it and inhaled.

“Seriously, you’ve got a Sikh boyfriend?”  It cheered me up; at least Mama wouldn’t throw Uma at me as an example of daughters I had to emulate.  “Does he have a turban and lots of facial hair?”

She said, “He has slight fuzz and short hair.  No turban.  He is good looking; you can check him on my Face book.  The fossils don’t like him.”

Between the two of us, Uma had lucked out.  She had a Sikh-in-disguise and I had two kids.  How unfair!  I gulped down some beer and said, “What does he do?”

I hoped wasn’t a scientist with NASA or some such thing. I’d shoot myself if he was.