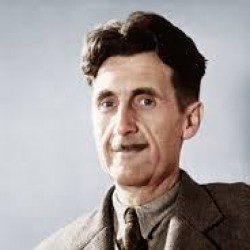 The author of Animal Farm is George Orwell. His real name was Eric Arthur Blair. He was a very popular novelist, essayist, critic and journalist.

His works spoke out against the social injustice that was prevalent at that time. He was in favor of democratic socialism and was opposed to totalitarianism.

He continues to be held in high esteem as one of the most influential voices of his time, who spoke out about the English culture, as it was, during his lifespan.

An Interview with George Orwell

The author of Nineteen Eighty-Four reveals how his bleak vision of 1984 compares to the real thingIn the late 1940s, George Orwell (whose real name is Eric Blair) wrote Nineteen Eighty-Four, the most chilling modern account of how things might end up if we fail to preserve our freedom.

But Orwell himself is not pessimistic at all. In an exclusive interview with Business Software Review — his first in over 30 years — Orwell reveals the motives that led him to write Nineteen Eighty-Four, and how his views have changed over the last three decades. He was interviewed at his home outside Cambridge, England by ICP editor Scott Palmer.

Palmer: Did you regard Nineteen Eighty-Four as a “prophetic” novel? Do you think it’s turned out that way?

Orwell: That question came up when the book was first published, and I’ll give you the same answer I gave then: the society I depict in Nineteen Eighty-Four will not necessarily come about. But allowing for the fact that the book is a satire, meaning that it’s an exaggeration to make a point, something quite like [the society it depicts] could come about.

I set the story in Britain to show that English-speaking countries are not above happenings of this kind: that totalitarianism, if not fought against, can triumph anywhere. It’s a warning, not a prophecy. As for how my “prophecies” have turned out, I suppose that’s something on which we all keep our own scorecards. Since 1950, when I stopped writing, the spread of totalitarianism over the globe has accelerated.

Totalitarianism is the basic pattern of society in many countries, yet our part of the world has not so far succumbed. The fact that the year 1984 is producing this interest in my book is an encouraging sign. Another entry in the positive column is the alarm so many people feel when technological development threatens to increase the power of the government over the individual.

Whenever we see a government of laws assert itself over a government of men, we have positive grounds to hope that the society in Nineteen Eighty-Four is not coming. In the book, of course, there are no laws but many crimes. On the whole, I think the world of 1984 is a little closer to the situation in the book than it was in 1950, but much less so than it could have been. However, the potential for a totalitarian world is large enough that people are worried about it.

Palmer: In the book, you presented the great powers of the world as de facto co-conspirators in a plot to “busy giddy minds with foreign quarrels.” Perpetual war not only distracted the people from troubles at home, but provided an excuse for oppression and constant spying on the citizens. Do you see this happening today between the United States and the Soviet Union?

Orwell: There isn’t yet a conspiracy, but as far as the people of the world are concerned, there might as well be one. We all contribute to support an enormous military establishment: and at present, there’s no alternative.

As imperfect as things might be in the West, they’re still vastly superior to those in the East. However, our defense institutions have to be constantly watched to make sure they don’t crush the freedoms they are supposed to protect.

Your own President Eisenhower never did better than when he warned of the dangers in the growth of the military-industrial complex. The using of the world’s resources for armaments is a great totalitarian technique for the subjugation of the people.

Palmer: But if both the U.S. and Soviet Union have enough nuclear missiles to destroy each other a hundred times over, why do they both keep pressing for more, more, and still more missiles? If it isn’t just a game, why do we have to keep building more and more weapons?

Orwell: Well, the potential is for it to turn into a game, where the nations exist to support the military rather than the other way around. That’s certainly a scary possibility. I suppose they worry that the other side might develop a new technology through which all their weapons would suddenly be neutralized.

And then, with the aid of a couple of hand grenades, the other side would conquer the world. It’s rather like what happened in the city of Florence during the Middle Ages. The warring factions started building towers, and everybody had to have one. Then, everybody had to have one taller than anyone else’s. At a certain point, it becomes ridiculous.

Palmer: It just seems that there’s always a “threat.” Currently, it’s the Soviet Union that’s going to come in and take us over, so our government has to have more power to crack down on dissenters and “subversives,” on freedom of the press, and everyone has to take a lie detector test.

Orwell: Well, this is the great paradox, of course. What you don’t want is to be taken over by a totalitarian power.

The great danger is that in protecting yourself against a takeover, you might become totalitarian yourself — at which point, as at the end of Animal Farm, the pigs become indistinguishable from the human beings.

I think that Animal Farm was very good in showing the role of paranoia in establishing and maintaining power. But it’s also true that even paranoiacs can have enemies.

Palmer: In the 1930s, we had an economic depression. Since then, however, we’ve had nothing more serious than “recessions” and “downturns.” The last war we were in was World War II: since then, we’ve engaged in innocuous-sounding “police actions” and “rescue missions.” Do you think that our language is being destroyed by a gradual infiltration of Newspeak?

Orwell: I’m rather embarrassed by this question on language. I now think that the model I gave of Newspeak and thought control could not really work. I would have said at the time, of course, that what I had written was a satire, an exaggeration. But it’s certainly not true, as I suggested in Nineteen Eighty-Four, that you can control the way people think by controlling the way they speak.

So I think that Newspeak is a fine demonstration of what you might call “the totalitarian will,” the desire to reshape society by tackling its most basic institution, language. As a model of how thought could be controlled, however, I think it was off the mark.

Palmer: For all practical purposes, computers had just been invented when you were writing Nineteen Eighty-Four. Do you think that the development of computer technology has had a positive or a negative impact on the prospects for freedom?

Orwell: Computer technology is just that: technology. It’s just as morally neutral as any other technology, such as the ability to make fire, or the ability to print books. But because the computer specifically outpaces and outperforms human beings, it seems very scary.

And because certain of its capabilities, such as collating information and searching files, have police applications, we can appreciate how useful the computer would be in limiting our freedom.

In the hands of a tyranny, computer technology will be used for tyrannical purposes. But where the will is to expand freedom, there is no reason why the computer should not help. The diffusion and availability of computer technology in the United States seems to me to be working that way. There are abuses, like the antics of the “hackers,” but computers in many hands is a happy development.

Totalitarian systems want, above all, to restrict access to information. No individual in the Soviet Union can own a duplicating machine or an Apple computer. There’s a sort of cheerful anarchy in the United States computer picture. Totalitarian governments are, above all, orderly, at least in intention, and disorganization has a lot to do with freedom.

Palmer: Do you really think that’s a significant factor in the totalitarian outlook — almost a sort of neatness fetish?

Orwell: Yes, absolutely. What reason does O’Brien, an agent of the thought police in Nineteen Eighty-Four, have for re-shaping Winston Smith? The powers that be could simply kill him.

But the totalitarian mind cannot stand the untidiness of having someone think differently, so it goes to the full length of producing in Winston Smith a genuine love of Big Brother.

And that’s what the government wants. They can then afford to bump him off, because he is no longer disorderly and untidy. One finds this neatness obsession a little bit in the military mind.

There is an American verb, peculiar to the military, “to police” — meaning, to make the whole place look terribly neat. And the fact that “police” and neatness come together in the language is very revealing. In Nineteen Eighty-Four, nothing works except the police.