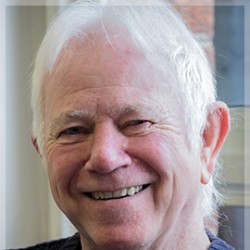 Anthony Lee Ross (born 10 August 1938) is a British illustrator and author of children's picture books. In Britain he is best known for writing and illustrating his Little Princess books and for illustrating the Horrid Henry series by Francesca Simon, both of which have become TV series based on his artwork.

'I irritated my parents from their early 30s till the day they died. I was quite a lot of a Horrid Henry'

Tony Ross, 74, was born in London. After training at Liverpool School of Art, he worked as a cartoonist, graphic designer, advertising art director and art lecturer. In 1976 he published his first illustrated children's book. He is best known for the Horrid Henry and Little Princess series of books, which have both been adapted for television. Little Princess: I Love Animals has just been released on DVD. He is twice divorced, lives on the Welsh Borders and has three daughters.

What is your greatest fear?

Being in a locked room with a polar bear. I don't like hens but I think polar bears are worse.

What is your earliest memory?

Lying in my pram in a sunny garden in London, looking at white crisscross lines in the sky. It was probably the Battle of Britain.

Which living person do you most admire, and why?

Sue Townsend, for creating Adrian Mole, her insight into people and for overcoming the problems she's had.

What is your most treasured possession?

A sketch by Paul Cézanne.

What do you most dislike about your appearance?

If you could bring something extinct back to life, what would you choose?

My belief in Father Christmas.

Who would play you in the film of your life?

Brad Pitt, although Woody Allen has been suggested.

What is your favourite word?

What is the worst thing anyone's ever said to you?

Extreme happiness, with the nagging feeling that something awful is just around the corner.

To whom would you most like to say sorry, and why?

To my parents, for irritating them from their early 30s until the day they died. I caused them worry about me falling under buses and into canals, I played jokes on them, I told lies to them, I imitated them behind their backs and I never listened to the good advice they gave me. I was quite a lot of a Horrid Henry.

Which living person do you most despise, and why?

The people at BT who continually assure me I will have broadband in two working days, and never deliver.

Which words or phrases do you most overuse?

What is the worst job you've done?

Cleaning the inside of huge drains. I had a gas mask and a wire brush.

What has been your biggest disappointment?

Being continually overlooked in awards ceremonies and honours lists.

If you could edit your past, what would you change?

I wouldn't have bought a Peugeot.

When did you last cry, and why?

When I discovered my cat was blind.

How do you relax?

What is the closest you've come to death?

Being tangled up in the ropes under the sail of a capsized boat in the sea off Anglesey 20 years ago.

What song would you like played at your funeral?

On The Good Ship Lollipop, by Shirley Temple.

As the oldest man in the history of the world.

What is the most important lesson life has taught you?

All you need is love.