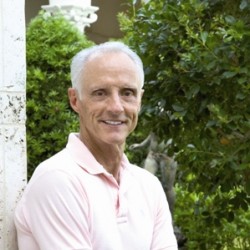 Doctor and author Robin Cook is widely credited with introducing the word ‘medical’ to the thriller genre, and decades after the publication of his 1977 breakthrough novel, Coma, he continues to dominate the category he created.

What a shock: Robin Cook fuses stem cells with a suspenseful tale

Robin Cook's latest medical thriller may seem like yet another example of the author's uncanny ability to anticipate national controversy, in this case the uproar over federal funding for embryonic stem cell research. After all, the Harvard-trained medical doctor-turned-novelist has been writing well ahead of the public-debate curve since his breakout novel, Coma, nearly 25 years ago.

But in fact, Shock, Cook's expose of the private infertility industry, was actually delayed nearly a year by an arrival of a different sort -- Cameron Cook, the author's first child.

Did fatherhood turn life upside-down for the 61-year-old dad?

"Oh wow, absolutely!" he chuckles by phone from his home on Martha's Vineyard. "Especially since the boy took over my writing room. I wrote the last two books on a card table in the living room."

Impending fatherhood may have played a role in turning the doctor's mind toward the dramatic possibilities behind the closed doors of America's infertility clinics. It is largely within these privately funded clinics that controversial stem cell research is being conducted because the federal government, beset by anti-abortion groups, has refused to grant it funding.

Shock, named for the technique of fusing two cells, is a return to form for Cook, whose last outing, the Atlantis-themed Abduction (2000), was considered pretty farfetched even by science fiction standards. This time out, he's back to what he does best: spinning a suspenseful tale, one that places curious female Harvard grads in mortal danger as they seek to uncover the truth about a mysterious clinic that's harvesting more than HMO dollars.

When the two grad students -- prim-and-proper Texas debutante Deborah Cochrane and her street-smart New York girlfriend Joanna Meissner -- answer an ad in a campus newspaper to earn $45,000 by donating eggs to the Wingate Clinic on Boston's North Shore, their goal is to raise enough money to write their master's theses in Venice. But when Deborah wants to know more about the fate of her eggs, the clinic stonewalls her. Undaunted, the pair concocts aliases to obtain employment at the creaky former psychiatric hospital. Suffice it to say that going on for their doctorates might have been the better choice.

Cook admits the timing of Shock was fortuitous. "I suppose you could say that it's the most like Coma in that it deals with an issue that everybody seems to be concerned about," he says. "I wrote this book to address the stem cell issue, which the public really doesn't know anything about. Besides entertaining readers, my main goal is to get people interested in some of these issues, because it's the public that ultimately really should decide which way we ought to go in something as ethically questioning as stem cell research."

As a doctor, Cook marvels at the enormous potential of this evolving medical field. "This is the most promising aspect of medical research that has ever come along. It's going to make even the discovery of antibiotics pale in comparison," he predicts.

"Up until now, all of the medicine that we've done has not been curative; it's been a way of helping the body's own defenses in some form or fashion. This stem cell research has the potential for creating true cures for many human illnesses. If you're a doctor, the idea of actually having the ability to cure people rather than just kind of putting your finger in the dike and keeping it there is the most exciting aspect of it."

Pro-life groups, however, have condemned stem cell research for tampering with human life, albeit at the microscopic level.

"That is the main problem, that it does brush up against the whole abortion issue, which has been a real conundrum in this country," he says. "Because the government up until now has decided not to fund this research, it pushes this research, which is going to be done, into the private labs, just as I do in the book. And once it's in the private labs and nobody knows what they're doing, they're doing whatever they like."

Which brings up everybody's favorite question: Couldn't that make human cloning a reality?

"Yes, absolutely," Cook insists. "With the pressure on the infertility clinics, that alone is enough to encourage people to ask for it and various and sundry researchers to go ahead and do it. There is no question in my mind that it's going to happen. Again, part of the reason is that all this can be done behind closed doors, and they use private money, so it will happen."

The author admits he never thought he would have so much compelling material to work with when he began writing fiction in 1970 after completing medical school at Columbia University and post-graduate training at Harvard.

"If I tried to be the writer I am today a number of years ago, I wouldn't have very much to write about. But today, with the pace of change in biomedical research, there are any number of different issues, and new ones to come," he says.

No longer in private practice, Cook remains on the staff of the Massachusetts Eye and Ear Infirmary in Boston. Keeping his lab coat handy helps him turn our fear of doctors into bestsellers.

"I joke that if my books stop selling, I can always fall back on brain surgery," he says. "But I am still very interested in it. If I had to do it over again, I would still study medicine. I think of myself more as a doctor who writes, rather than a writer who happens to be a doctor."

And after 23 books, he has come up with a diagnosis to explain why his medical thrillers remain so popular.