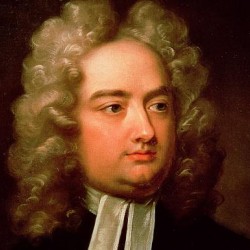 Jonathan Swift was an Anglo-Irish satirist, essayist, political pamphleteer (first for Whigs then for Tories), and poet, famous for works like Gulliver's Travels, A Modest Proposal, A Journal to Stella, The Draper’s Letters, The Battle of the Books, and A Tale of a Tub.

Swift is probably the foremost prose satirist in the English language, and is less well known for his poetry.

Swift published all of his works under pseudonyms — such as Lemuel Gulliver, Isaac Bickerstaff, M.B. Draper — or anonymously. He is also known for being a master of two styles of satire; the Horatian and Juvenalian styles.