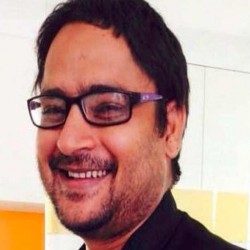 Imran Siddiqui was born in the year 1979, in Haraiya Village, located near the Bihar Border, on the Eastern side of Uttar Pradesh. He studied in a local school and college. In the year 1997, he went to Aligarh, Uttar Pradesh to prepare for his engineering exams. Since childhood, he took a keen interest in literature and philosophy.

After preparing for the IIT exams, he found himself automatically drawn towards social research and literature, which also gave him an opportunity to relive his childhood hobbies. In the year 1999, he went to Delhi, where he dabbled with theatre for some time.

In Oct 2002, he came to Mumbai. In the year 2003, he joined the arena of television soaps as an assistant director. Since then, he is active in the fields of television, theatre and writing.