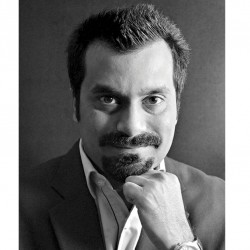 B.J. Sadiq is a British Pakistani. He was born in 1983 and read economics at Hughes Hall, University of Cambridge. He has also received a degree from Government College University, Lahore. Soon after Cambridge, Sadiq apprenticed at the House of Lords before working as a financial journalist in London, and has also been a contributor to a range of publications, including the American Interest, the Spectator, the Daily Times and the Friday Times. He divides his time between Pakistan and England.