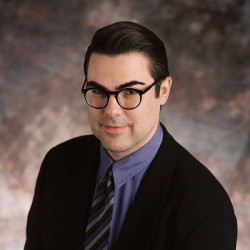 He has held a number of government and think-tank posts in Washington, D.C., including at the United States Department of Justice. Swanson serves on the advisory council of the Ford's Theatre Society. Born on Lincoln's birthday, he has studied and collected books, documents, photographs, art, and artifacts from Abraham Lincoln's life—and death—since he was ten years old.

Q & A With Author James Swanson

Q: You and Abraham Lincoln share the same birthday. Do you feel some kind of special connection to our sixteenth president?

A: As far back as I can remember, I’ve always felt connected to Abraham Lincoln. On the day I was born, the nurses teased my mother and asked if she was going to name me “Little Abe.” Luckily for me, she didn’t! From an early age I received Lincoln items as gifts from my parents and grandparents — comic books; souvenirs from the Lincoln sites in Illinois, where I was born; picture books; and, when I learned to read, books about Lincoln. He was the first American president I ever read about.

Q: What were the challenges of paring down an adult-length book into a kid-sized version?

A: The hardest thing about paring Manhunt down to size was deciding what to leave out. I had already pared the adult version down — I wrote a 450-page book but I could have written a 1000-page one. I knew that I could not save all of my favorite stories for the kids’ version either, so the first thing I did was to list every key character, incident, and scene that just had to be in the book. Once I gathered these essential elements, I started to revise and rewrite much of the adult book to connect this material in a seamless narrative. Then I reintroduced as many of the secondary and sidebar stories and characters as space would allow. I knew it would not work to just cut and paste the adult book down to kid size. I had to rethink the entire manuscript.

Q: Was it difficult locating all the primary sources and deciding what was most important to include in your story?

A: Yes, it was difficult to locate the sources. It has taken me years of hard work to build my personal reference library of thousands of rare and often unique original documents, manuscripts, newspapers, pamphlets, prints, photographs, artifacts, and memorabilia. I am still adding to it. Without my private archives, it would be impossible for me to write my books or illustrate them. For example, when I look for stories about what happened the morning Lincoln died, I need to have the original newspaper in my hands. I want to experience it the same way as someone alive in 1865 would have if they bought the morning paper from a newsboy. I need to feel the thick, rag paper in my hands. I want to turn the large pages in my hands. I need to see how the stories are laid out on the page. When I wrote my book, I wanted to read about the death of Lincoln in exactly the same way people who were alive then read about it, following events as they unfolded over time. The same goes for original letters, documents, prints, photographs, and artifacts produced at the time. In order to take the reader back in time, I need to go there myself first. I cannot do that without surrounding myself with the original materials.

Q: Chasing Lincoln’s Killer offers young readers an accurate, and at times quite graphic, account of Lincoln’s assassination. As you were writing, did you ever wonder if young readers would be at all squeamish about some of the gory details?

A: I wondered if the book would be too violent for children, especially the scenes of the actual assassination and of the medical treatment that the president received. I did not want to shock readers, but I wanted to tell the historical truth, not conceal it. Talking to children about the book before I wrote it helped me decide what to do. My niece’s second grade class invited me to teach a seminar on writing. When I walked into the room, they presented me with a handmade poster offering tips on how to write for kids. Tip #1 was “No foul language.” That was easy — there was no cursing in the adult Manhunt book. Tip #2 was “Keep in all blood and gore but not so much that our parents flip out.” When I asked if I should delete the graphic depiction of Booth shooting Lincoln, they pleaded “No!” When I asked if I should delete the scene where Lincoln’s blood seeps onto actress Laura Keene’s dress, the kids shouted “No! Please keep that in!”

Q: Chasing Lincoln’s Killer contains several photographs and illustrations relating to the events of the assassination, many of which are from your personal collection. Is there anything you can share about their history and origin?

A: One of my favorite images is an original photograph of John Wilkes Booth printed shortly after the assassination and issued for identification purposes to the manhunters in pursuit of the murderer. A soldier expressed his hatred of Booth by dipping his pen in an inkwell and scrawling a vehement sentiment across Booth’s photo. When I held that photo in my hand, I experienced a spine-tingling sensation that, in a moment, took me almost a century and a half back in time. I felt like I was alive in April 1865, joining the hunt for John Wilkes Booth.

Q: What is your favorite item of Lincoln memorabilia?

A: That depends on which week you ask me. At the moment two of my favorite items are collections of Civil War newspapers. I have an entire run of the Chicago Tribune from April through July, 1865, covering the end of the war, the assassination, the manhunt, and the trial and execution of Booth’s conspirators. I also have a set of issues from the New York Herald covering the same events. Holding these rare newspapers in my hands transports me back in time, and allows me to experience Lincoln’s death and the chase for his killer in the same way that Americans living almost one hundred and fifty years ago learned about them. Without original newspapers, documents, printed materials, photographs, artwork, and relics, I could never have written my book.

Q: Is anyone else in your family particularly interested in history?

A: All of them. We were a family of storytellers. My grandmother worked at several of the long-vanished, old tabloid Chicago newspapers, and my grandfather was a policeman from the 1930s through the 1960s. He saw it all, from the gangster era to the Vietnam riots era. They both loved telling dramatic stories. My grandmother got me interested in the Lincoln assassination when I was ten years old. My parents also loved history, and took me to many great historic sites. A boyhood trip to Gettysburg changed my life.

Q: In all of your studies of Lincoln and the assassination, what aspect of the events did you find the most surprising or unexpected?

A: I was pleasantly surprised to discover that when I began to write the book, I did not know the story as well as I thought I had. It seemed like I was uncovering new facts and meeting new characters every week. I also realized that history is never inevitable. When we look back in time, we assume it had to happen that way. But it didn’t. Booth’s bullet almost missed. President Lincoln did not have to die. Booth was almost captured at Ford’s Theatre. He did not have to escape that night. But later, he almost escaped the entire manhunt. Studying the Lincoln assassination reinforced the fact that, in the end, history is not abstract or inevitable — it is the story of men, women, and children as they pass through time, influencing events by their words and deeds.

Q: As we get ready to celebrate Lincoln’s 200th birthday in February 2009, what do you think every kid should know about Lincoln?

A: Few Americans know what a hard, underprivileged, and poverty-stricken childhood Abraham Lincoln had. Today we romanticize the myth of the idyllic log cabin, but when Lincoln was president he recalled his origins differently, with reluctance, pain, and regret. He enjoyed less than a year and a half of schooling. His early years were devoted to brutal, physical toil. He changed his destiny by cultivating a love of learning, reading, and writing, and by combining that with an unquenchable will to better himself. Lincoln once said that he was a living example of how a young person could succeed through hard work, and he was right.

Q: How did you get your start as an author?

A: By reading. The best authors are always great readers before they become great writers. When I was a child I loved books. I was always going to our local public library, and my parents gave me hundreds of books. In time, my love of storytelling made me want to write my own.

Q: What topic are you researching now?

A: Manhunt and Chasing Lincoln’s Killer are about John Wilkes Booth’s twelve-day journey from the scene of the great crime to ambush, death, and infamy. But the chase for Lincoln’s killer was not the only thrilling manhunt underway at the close of the Civil War in April, 1865. Another man was on the run that spring, desperate to save his country, his family, and his life. He was Jefferson Davis, president of the Confederate States of America. Accused of plotting the Lincoln assassination, Davis, like Booth, became the object of a huge reward and hot pursuit by Union cavalry. During the manhunts for Booth and Davis another man undertook his last journey, too. He was Abraham Lincoln, sixteenth president of the United States. Lincoln’s sojourn began on April 19, 1865 after the White House funeral. A week after he was shot, he was sent home to Springfield on a 1700-mile railroad journey. Along the way, his body was unloaded ten times and placed on view in the great cities of the north. More than one million Americans viewed his corpse, and several million witnessed the train roll by. It was the largest, most elaborate, and magnificent funeral in American history, before or since. My next book is about final journeys, the manhunt for Jefferson Davis and the funeral pageant of Abraham Lincoln.