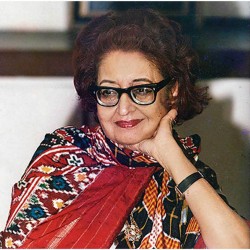 Qurratulain Hyder (1927–2007) is widely regarded as the most prominent writer of Urdu fiction in India. She is the author of four collections of short stories, five novels and several novellas. Among her works that have been translated into English are the classic River of Fire (Aag ka Darya); My Temples, Too (Mere Bhi Sanamkhane); Street Singers of Lucknow and Other Stories; and Chandni Begum. Her books have been translated into all Indian languages.

She worked as a journalist, scriptwriter and broadcaster with BBC, as well as Producer Emeritus, AIR, and copywriter for an advertising agency. Among her many awards and honours are the Bharatiya Jnanpith, the Padma Shri, the Sahitya Akademi Award and the Padma Bhushan.