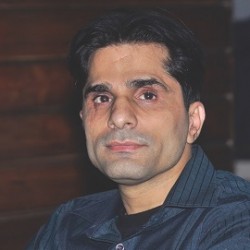 Navin Gulia is an author, adventurer, coach and teacher. He gained entry into the Limca Book of World Records in 2004 after having driven non-stop to Marsimik La in Ladakh. After joining the Indian Military Academy in 1994, Gulia suffered a fatal accident during the Passing Out Parade which paralyzed him from the waist onwards. He was able to sit up and use a wheelchair in just four months and completed a computers course with APTECH with 99 per cent.

He also completed a computer management PG from Symbiosis. He also taught at the Queen Mary Technical Institute in Pune and KV, NDA. He has created his own flying and driving controls and runs his own Coaching Academy in Gurgaon. He is also behind ADAA, a unique crusade for the welfare of street kids.

Navin Gulia has received numerous awards such as the Kavin Care Ability Mastery Award in 2006, Indian People of the Year Award, National Role Model Award, Haryana Gaurav Award, Karmaveer Chakra in 2009, Global Indian of the Year award, ICONGO Karmaveer Puruskar in 2011 and many other awards.