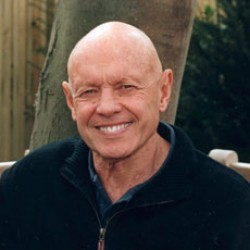 In 2004, Covey released "The 8th Habit". In 2008, Covey released "The Leader In Me—How Schools and Parents Around the World Are Inspiring Greatness, One Child at a Time". He was also a professor at the Jon M. Huntsman School of Business at Utah State University. You can purchase Stephen R. Covey's books and audios at http://www.7habitsstore.com

Covey died at the Eastern Idaho Regional Medical Center in Idaho Falls, Idaho, on July 16, 2012, due to complications from a bicycle accident he suffered the previous April.

Today, I spoke with Stephen R. Covey and we focused on his new book “The 3rd Alternative: Solving Life’s Most Difficult Problems,” which just came out today! Dr. Covey is the author of the worldwide bestseller, The 7 Habits of Highly Effective People. First written in 1989, it has now sold over twenty million copies in 38 languages! Dr. Covey has been recognized as one of Time Magazine’s 25 Most Influential Americans. He is the co-founder and vice chairman of FranklinCovey, the leading global professional services firm with offices in 123 countries. He is also the author of The 8th Habit. In this interview, Dr. Covey talks about why business negotiations should factor in the 3rd alternative, common conflicts that occur in the workplace that the 3rd alternative can resolve, and much more.

When negotiating a business deal, why do people seek the 1st or 2nd alternative instead of the 3rd, as you suggest in your new book?

They’re not aware that they can go for a 3rd Alternative, which is a better way than your way or my way. Most negotiators are trying to get their way. Through rounds of haggling, they usually arrive at a compromise, in which both sides concede something to get an agreement. By contrast, a 3rd Alternative requires no concessions at all because it’s truly a better deal for everyone. You get to it not by haggling but by asking, “Would you be willing to go for a 3rd Alternative that is better than what either of us has in mind?”

What are some of the most common conflicts that occur in the workplace that the 3rd alternative can resolve?

Beyond ever-present personality conflicts, serious conflicts arise over compensation, promotions, resource allocation, who gets credit for what, big strategy questions—almost all of them can be not only resolved but turned into great opportunities for growing and advancing the organization. A 3rd-Alternative thinker automatically looks beyond the two sides of a conflict in search of a better way.

Can you give an example of a situation at work, where someone resolved a conflict using your recommendations?

A young man reluctantly asked his boss for a raise. Of course, she could say either yes or no, and he was ready to fight if she said no. But she surprised him by going for a 3rd Alternative. She asked him about the clients he was working with, how the firm could serve them better, and what he would do to build more business with them. By listening to him, she learned how he could add a lot more value and earn a lot more salary. By working with him over time, she built up not only his confidence and compensation, but also her volume of business with his clients—a true “win-win” for everyone.

You believe that synergy short-circuits conflict in the workplace. What are the barriers to achieving synergy?

You get to the 3rd Alternative through synergy, which happens when the talents of two or more people add up to more than the sum of the parts. Synergy starts when I go to a person I differ with and say, “You see things differently. I need to listen to you.” It’s exciting when you truly hear out divergent views and you start to see how to bring them together for a solution nobody ever thought of before. Of course, the barriers are defensiveness, territoriality, the “not-invented-here” syndrome.

How does someone create a win-win situation in business? What happens when one side benefits more?

When one side benefits more than the other, that’s a win-lose situation. To the winner it might look like success for a while, but in the long run it breeds resentment and distrust. You get to win-win simply by asking, “How could we both win in this situation?” What you’re looking for is a 3rd Alternative that’s superior to anything you could create alone.