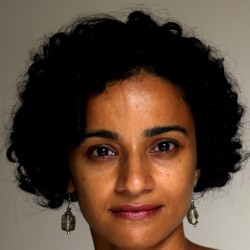 Mridula Koshy is the author of If It Is Sweet(Transurban Press), a collection of short stories. If It Is Sweet won the 2009 Shakti Bhatt First Book Prize and was shortlisted for the 2009 Vodafone Crossword Book Prize.

She lives in New Delhi with her poet-schoolteacher partner and three exceptionally wonderful children. She was many other things before she became a writer:

a cashier at a Kentucky Fried Chicken, swap-meet sales clerk, backstage dresser at fashion shows, waitress who set a table cloth on fire, polisher of silverware in the back room for many months afterward, writing adviser,

a professional advocate of multiculturalism (it was the late 80s), a painter (not of the fine arts variety), receptionist at a law firm (fired for losing phone calls), collator of tax forms, union organizer, community organizer, reading fairy at the library.

This month’s ELLE has a little piece by me on Mridula Koshy, the author of the short story collection, If It Is Sweet. Koshy is one of the lovely ladies who, as the magazine’s cover puts it, “owns the future”. I interviewed Koshy over email, which can often result in a dry, boring question-and-answer session that leaves you thinking “Blah”. But Koshy’s answers were delightful and since I could only use a tiny bit of what she wrote, here’s the interview, pristine, untweaked and unedited.

Have you always been interested in writing? Was there a time during the cashier-at-KFC to reading-fairy-at-library years that felt like a turning point?

When I was ten I tried to write a story and got stuck on plot. I introduced my characters but could not figure out what came next. I tried again when I was about fifteen. I took a screen writing class and turned out a hackneyed plot – always the thing to do when you have trouble coming up with an original plot.

My plot: an Indian boy raised in America has an identity crisis, travels to the mother country, mistakes the Indian girl he meets there for one that needs rescuing from arranged marriage/her culture (a horrible conflating of the two on my part) and in the resolution of this crisis achieves enlightenment.

Except that I couldn’t figure out what enlightenment would look like vis a vise dilemma of identity. I never finished the screen play. It took me till I was in my mid-thirties to try writing again. I found myself plagued by the same problems with under-developed plots and an over-abundance of unresolved ideas.

The difference was at thirty-five I knew what ailed me and so could grapple with my mess. And I had discipline so that I went at it longer. Perhaps I needed writing like I never had in the past. When I was a child I thought writing was something that just comes to you, a visitation, a miracle, proof of ones genius, a necessarily easy achievement. This is of course a frightening understanding of writing and I am glad I have left it behind me.

Sometime after my third child I found that many of the questions I had been raising with myself, questions of justice and of motherhood – the two are hugely related – could not be answered as I had answered them in the past.

It was no longer enough to read other people’s thinking about these questions or to throw myself into activism to see if some internal resolution couldn’t be achieved through working for external change. I turned to writing because it is a purely internal process, one that requires silencing all the noise and chatter till all that is left is my own voice.

How did “If It Is Sweet” come about? Did you have any expectations when it was published?

I expected the book would open the door to my entering the on-going conversation in India, that conversation in which we struggle to understand who we are. I have been more than amply rewarded in this respect although distribution of the book sucks and more people fan me on face book than read my book and oh so many other grouses.

Do you think being ambitious is important?

Writing is on the verge of becoming a disgraced profession because of the increasing emphasis on writing as a means to celebrity. On the other hand there is hardly any activity from cooking to sex that isn’t a means to achieving celebrity. So there are no honorable professions left.

This is America’s rather nasty contribution to global culture. Our acquiescence is of course our own. And back to ambition: yes, of course it important to be ambitious about writing from your deepest discomfort with yourself. When I was an union organizer my mentor in the movement taught me, “if you’re comfortable, you aren’t organizing.”

Do you have any rituals related to writing?

I like to write where I can see people. When I wrote in my bar sati office in Delhi I would get up from my seat and go peer over the parapet to make certain the world, or rather people, were still there. Again, there is nothing like spending time with myself to make me realize how much I long for the company of others.

Do personal experiences impact your storytelling?

Yes, I am afraid it is all autobiographical. I have fallen in love with Poonawalla’s, lost my babies in many different ways, in child birth, in car wrecks, I have also lost my sister and just about everyone else I have ever loved. I have been afraid to love because of the hideously long string of losses. And I lost a papal in the bushes once because it is so much more romantic to lose a papal than an Anne Klein watch given to me by my mother.

And I whispered to a boy in those same bushes and then I never saw him again, well after first seeing him for a couple more years, and later I was an old woman hauled to Bhutan by my monkey companion. Yes, really. The Poonawalla, yes. Once he was French. And many other times, many others besides.

Are there any downsides to being an author?

Sometimes I am tense from needing life to go away. So I can write. My life is of course my children. Thus: “If you would only make your bed and put away the dishes and hang up your pajamas instead of draping them on the sofa and clip your fingernails because your table teacher told you only a week ago that your fingernails were too long.

And if he wasn’t being polite he would have told you how disgustingly dirty they are. And I was so embarrassed for you. For me. And it’s been a whole week since. And have you clipped them? And if you would only…then I could go write. “This doesn’t make me a good mother.

Then I get depressed about my failure to be a good mother. Usually by then a good two weeks have elapsed and I have managed to write something. And I can tell myself to start over again.

Why do you think fiction is important?

It makes life worth living, even a shitty life; it hints at the truth there is something greater out there.

Do all the doomsday commentaries about people reading less worry you?

I haven’t been tuning in. I need to. There is so much to worry about and so little time in which to do it. Mostly I worry about how little I read these days.

Can you tell us a little bit about the novel you’re working on?

I have a novel forthcoming from Harper Collins India. I wish I could come up with less painfully awkward titles. But if you look at the course I have taken, from If It Is Sweet to Not Only The Things That Have Happened, you’d have to conclude I am nothing if not painfully awkward. And not necessarily lovable for it.

But the title is warranted. It is a painful story: a woman relinquishes her four year old son to a tourist couple passing through her town. Thirty six years later, in the thirty six hours that is the present tense of the novel, she dies having never set eyes on him again, and he lives, a forty-year old man at odds with the fragments of his past he remembers, or mis-remembers, he is not sure which.

I suppose the only thing more painful than a mother losing her child is a society that wrests a child from its mother. I am curious about the two societies I write about in Not Only The Things That Have Happened – Kerala and the Midwestern United States.