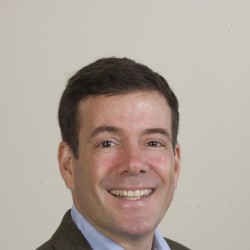 Mark Alpert, author of Final Theory, The Omega Theory, Extinction, The Furies, and The Six, is a contributing editor at Scientific American. In his long journalism career he has specialized in explaining scientific ideas to readers, simplifying esoteric concepts such as extra dimensions and parallel universes. And now, in his novels, Alpert weaves cutting-edge science into high-energy thrillers that elucidate real theories and technologies.

A lifelong science geek, Alpert majored in astrophysics at Princeton University and wrote his undergraduate thesis on the application of the theory of relativity to Flatland, a hypothetical universe with only two spatial dimensions. (The resulting paper was published in the Journal of General Relativity and Gravitation and has been cited in more than 100 scholarly articles.) After Princeton, Alpert entered the creative writing program at Columbia University, where he earned an M.F.A. in poetry in 1984.

He started his journalism career as a small-town reporter for the Claremont (N.H.) Eagle Times, then moved on to the Montgomery (Ala.) Advertiser. In 1987 he became a reporter for Fortune Magazine and over the next five years he wrote about the computer industry and emerging technologies. During the 1990s Alpert worked freelance, contributing articles to Popular Mechanics and writing anchor copy for CNN's Moneyline show. He also began to write fiction, selling his first short story ("My Life with Joanne Christiansen") to Playboy in 1991.

In 1998 Alpert joined the board of editors at Scientific American, where he edited feature articles for the magazine and wrote a column on exotic high-tech gadgets. With his love for science reawakened, he wrote his first novel, Final Theory, about Albert Einstein and the historic quest for the holy grail of physics, the Theory of Everything. Published by Touchstone in 2008, Final Theory was hailed as one of the best thrillers of the year by Booklist, Borders and the American Booksellers Association. Foreign rights to the novel were sold in more than twenty languages, and the movie rights were acquired by Radar Pictures, a Los Angeles production company. Alpert continued the saga of the Theory of Everything in his second book, The Omega Theory, a gripping story about religious fanatics who try to trigger Doomsday by altering the laws of quantum physics. His next thriller, Extinction, focused on brain-computer interfaces and a collective intelligence that decides to exterminate the human race.

His fourth novel, The Furies, told the story of an ancient clan who share a genetic mutation so shocking that its discovery could change the course of history. And his first Young Adult novel, The Six, is about six dying teenagers whose lives are “saved” when their minds are downloaded into U.S. Army robots.

Alpert lives in Manhattan with his wife and two non-robotic teenagers. He's a proud member of Scientific American's softball team, the Big Bangers.

Mark Alpert is an internationally best-selling writer who I got a chance to talk with at this year’s ThrillerFest. When he’s not jetting around the world, he’s writing science-fueled thrillers as well as books for the YA market.

He was also kind enough to answer my questions.

How does your scientific background (a major in astrophysics from Princeton, writing for Scientific American, and more!) affect your books?

I used to be an editor for Scientific American, and in 2005 we put out a special issue celebrating the hundredth anniversary of Einstein’s miracle year, when he laid the groundwork for the two main pillars of modern physics, the theory of relativity (which I studied in college) and quantum theory. What’s not as well-known, though, is that during the second half of his life Einstein searched for an even more comprehensive understanding of the universe, a unified field theory that would encompass both general relativity and the quantum world. As I worked on the special magazine issue, I became fascinated by this part of Einstein’s story. All of his attempts to devise a unified theory ended in failure, and today’s physicists are still struggling to achieve the same goal. I was also fascinated by Einstein’s heartache over nuclear weapons and the fact that his theoretical work contributed to their development; he once said, “If I had known they were going to do this, I would have become a shoemaker.”

From this biographical magazine project, I found an intriguing idea for a novel: What if Einstein actually did discover a Theory of Everything, but then realized that it would lead to weapons even worse than nuclear bombs? Would he have published the theory anyway? Or would he have kept it secret, bequeathing the equations to his most brilliant students and strictly forbidding them from revealing the theory until world peace was at hand? That became the premise of Final Theory, my first novel, published by Simon & Schuster in 2008. I’ve loved science my whole life, so it was particularly fun to sprinkle scientific clues into the manuscript. I also enjoyed setting fictional scenes at real labs such as the Fermi National Accelerator Laboratory near Chicago.

You write the occasional technothriller. What sets this genre apart from science fiction or thrillers?

A technothriller is a novel that zeroes in on a cool new technology and explores its promise and perils. For instance, my third novel, Extinction (published by St. Martin’s Press in 2013), focused on brain-computer interfaces, a class of electronic devices that are implanted in brain tissue and deliver signals to and from the neurons there. Researchers at the University of Pittsburgh Medical Center have developed chips that can be inserted in the brain’s motor cortex, the region that controls voluntary muscle movements. With the help of this chip, a maimed or paralyzed person can manipulate a prosthetic arm. Researchers have also developed devices that feed video images to the nerve cells in the retina, giving blind people a crude form of vision.

This technology lends itself well to suspense fiction. In Extinction, one of the characters wields a prosthetic arm equipped with ultra-powerful motors and a retractable knife; another character wears glasses that feed infrared signals to her brain, enabling her to see in the dark. The novel also features swarms of cyborg insects, studded with tiny cameras and radio receivers and bio-weapons. My editor at St. Martin’s thought this idea was pretty far-out, but the Pentagon has already funded projects that demonstrate the concept. Just Google “cyborg insect” and you’ll find videos of researchers flying radio-controlled beetles around their lab.

What are the best and worst parts of living in Manhattan as a writer?

The best part: you can experience almost anything without traveling very far. Almost every culture has at least a small representation in New York City, so you can learn a lot just by taking the subway to a neighborhood you haven’t visited yet. My next novel, The Coming Storm (scheduled to be published this January by St. Martin’s Press), is set in New York in the near-future, after several years of haywire climate and political oppression have turned the city into a battleground. The book takes readers on a whirlwind chase from a flooded Brooklyn and a riot-torn Manhattan to a federal research center on Rikers Island where the government is grooming super-soldiers for an American Gestapo. It was very easy to imagine the events of this novel, because I see so many of them already happening here.

The worst part: It’s so expensive to live in Manhattan! And as you probably know, writing doesn’t always pay very well.

They’re both great. I love Lee Child for the interesting thoughts he puts into Jack Reacher’s head — ruminations about numbers, geography, the military, diner food. And his fight scenes are always great fun to read. I love James Rollins for the globe-spanning adventures, the scientific puzzles, and the diverse cast of amusing characters. I’m a big fan of Kane the war dog.

What are you working on now?

I’m writing a Young Adult novel. For the past few years I’ve been alternating between writing thrillers for adults and science fiction for teenagers. I recently wrote a trilogy of YA books — The Six, The Siege, and The Silence (all published by Sourcebooks Fire) — about a group of terminally ill teens whose lives are “saved” when their brains are scanned and all their thoughts downloaded into combat-ready U.S. Army robots.