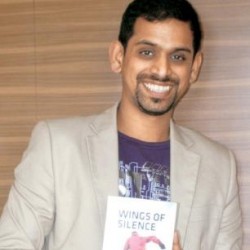 A recipient of the Shankar’s international award for creative writing from the President of India, Shriram’s first book Wings of Silence was published by Westland Books / Grey Oak Publishers in 2012 and also published in South Korea by Darun Publishers.

He is an accomplished singer-songwriter, with over 2.5 million views on YouTube. In 2007, he released his first pop music album, Is Dhundh Mein across India launched by Shankar Mahadevan.

Born in Bangalore, he spent his schooling days in the state of Gujarat and has an MBA from the Melbourne Business School. He lives with his wife and daughter in Melbourne and runs his own marketing consulting business.

He is currently working on his next novel.