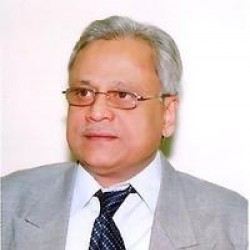 Abhijit Basu, one-time research scientist and former adminis­trator of government finances, is presently engaged as part-time independent director in the corporate sector. An avowed ad­mirer of the ideal of the Renaissance man, Basu has also been a life-long follower of the liberal arts, especially Sanskrit, English and Bengali literature, and history, apart from his keen interest in the sciences. Of late, Basu has been busy as an author and polymath editor, covering a broad spectrum of topics and ideas. His first book, ‘a collection of critical, scholarly and absorbing essays,’ titled Prophets, Poets and Philosopher-Kings: Sketches on India’s Spiritual & Literary Heritage (Celestial Books 2012), was well received: Versatile scholar Abhijit Basu’s analytical and interdisciplinary research into the eternal and transnational relevance of the overwhelming ancient India, enriched with lucid prose and current bibliography, is invaluable for aspiring researchers and students of literature and cultural studies. (The Tribune, 20 May 2012.) Basu hails from an old Kolkata-based house of civil servants, professionals and academics. He considers himself blessed in having had gentle exemplars as parents, and now an attached family to shower affections upon.

Author Interview: Abhijit Basu, author of 'Marvels and Mysteries of the Mahabharata'

There are a few things that strike us upon reading 'Marvels and Mysteries of the Mahabharata'. The determination of the author, Abhijit Basu and a reason to know him better. This interview does provide us with a little insight into the mind of this very well-read author.

He talks about what he calls 'a spontaneous urge' within himself that prompted him to become an author and all the books and authors, which have touched him. But what his take on the Mahabharata was, at the start and how he develops it into the book, he explains to us in great detail.

He started reading it in original Sanskrit form, 20 years ago, and in him was born a need to share it with the world with what he terms, as a lens for modernity.

How did ‘Marvels and Mysteries of the Mahabharata’ happen?

The Mahabharata has always fascinated me. Especially, ever since I started reading it in its original Sanskrit form some 20 years ago, there was this seed of an inner urge to share my view of the pristine epic, as seen through the lens of modernity. The urge was reinforced by the introductory words of the narrator-bard Sauti – that while many can memorise the epic, few can comment on it. It was quite a forbidding challenge, but I was fortunate to have some awareness of the old Epic-Puranic wisdom (prajnaa puraanee), as also of several modern interpretive commentaries.

But a more circumstantial inspiration came a couple of years back when I was writing my previous book, ‘Prophets, Poets and Philosopher-Kings’. There, one of the essays, titled ‘The Unlikely Protagonist’, dealt with Yudhishthir as the central figure of the Mahabharata drama. It was while working on that essay that the idea of taking up certain subtler aspects of the Mahabharata as the theme of a new book project on the epic started crystallising in my mind. Hence, shortly after finishing that book, I began vigorously researching and writing on MMM.

Obviously a lot of research has gone into it. How did you pick out the best ones you thought would fit into this book?

The research that went into it was a labour of love. Of course, it involved lot of reading: from the original Sanskrit epic; from its translated versions, and from tomes of commentaries – both old and new, Indian and Western. There was also extensive internet research. Then there were my discussions with a few scholars that helped me along some innovative lines of thought.

As regards picking up the best lines for research, the task was relatively simple, once I had the right questions in mind about aspects that might evoke awe or puzzlement in a reader’s mind. Why is Vyasa less of a narrator and more of a participant in the epic? Why did Pandu become a wandering ascetic at the height of his power? How could Yudhishthir be so indecisive and yet enter heaven with such unerring majesty? Why did Krishna change so radically from a peace-negotiator to ruthless exterminator? Was the burning of the Khandava forest a sanctified deed or a gory pogrom? Was Draupadi’s polyandry linked to tribal custom? When did the Kurukshetra war happen? Was a simple warrior story later overlaid with Krishna emphasis? Which came first, the Ramayana or the Mahabharata?

Obviously, these were not just rhetorical questions, but core research issues which fitted in my working hypotheses. But for me, the real thrilling ‘discoveries’ were the new insights, such as: a global comparison of curses in Indian and Biblical/Greek traditions; the intriguing significance of Yudhishthir’s mleccha pseudonym ‘Kanka’ during his year in disguise; the reason behind Arjun not suffering any post-war guilt, unlike his elder brother; the Megasthenes reference to an Indian Hercules, explained by historians as Hari-kul-esh, or Krishna/Balaram; ethnological interpretation why Yudhishthir never refused a game of dice.

The similarities between the Sumerian, the Greek and the Indian epics is another story in itself, which you have included into this book. Did you notice these before you researched the Mahabharata?

Yes, the broad subject of comparative literature, especially between folk-epics of the world, has been one that generally interested me since long. I thought the comparisons between say, Gilgamesh and Odysseus, between Dhrtarashtra and Priam, or between Karna and Hector, would be a germane aspect to cover in the book so as to inform and tickle the reader’s mind.

Why do you think that the Mahabharata is an epochal tragedy? Did you find it difficult to tell your story the way you saw it?

The Mahabharata is an epochal tragedy in the sense of what Toynbee and Tagore saw as the ‘civilisational memory’ ingrained in the ethos of the ordinary Indian. Popular perception in India has since long held the tragic battle of Kurukshetra and the passing away of Krshna as marking the onset of the amoral epoch of the Kali-Yuga.

As for the challenge of story-telling, once I did the grind of jotting down the points, the writing just flowed from that. When one is immersed in the task of writing on a deeply reflective subject, one is occasionally blessed with some ‘eureka’ moments of new revelation, even at the oddest of times.

Thus, there were occasions when I found clear answers to a few of my own knotty questions during the hours of half-wakefulness at night. Far from proving difficult, writing MMM was on the whole a thrillingly stimulating experience.

Who was it that told you that you could become the author you are today?

There were several friends and relatives who wanted me to write. But basically, there also was a spontaneous urge within myself that prompted me to take up authorship in a sustained manner.

My chosen genre was non-fiction matter, based on cultivation of the rich field of knowledge the world offers to one seeking cerebral fulfilment. I could pursue that once I had more time in hand after the phase of active full-time service.

What book is coming from your desk, next? When do you see that released?

I am now in the preliminary stages of working on a few leads. One is a possible book on the Purana tales, with interpretations of their perennially relevant aspects. Another is a more thematically integrated book on the saga of a certain ancient dynasty, the branches of which held sway over India’s classical past.

Yet another line of work relates to Western classicism, in the shape of a part-manuscript on Pericles and Cicero as the ‘original’ Republicans. I plan to decide on the order of the projects soon.

Who is you inspiration? Is there an author you take inspiration from?

Basically, I am inspired by the twin ideals of good knowledge-linked analysis and good rhetoric. For the first, across the generic board, I admire the likes of EW Hopkins, AL Basham, Nirad C Chaudhuri, George Orwell, Isaiah Berlin, Buddhadeb Bosu and Carl Sagan.

Among rhetorical stylists, my ideals range from Cicero, Lincoln, Dickens and Tagore to the wittily down-to-earth PG Wodehouse and Alistair Maclean.

My liking is more for the classicists who look for cultural, philosophical and literary significance in old works, rather than the plain purveyors of ‘mythologies’ as they seem to be.

The references in MMM give a whole list of such commentator-classicists. The ones I particularly like are Rajshekhar Basu and Buddhadeb Bosu, IrawatiKarve, Gerrit Jan Held, VS Sukthankar, TRS Sharma, Janaki Sreedharan, John Brockington, Alf Hiltebeitel, and JL Fitzgerald.

I like them mainly because of the sheer logical force that makes their interpretations impact on the modern mind.

Each author is a unique entity and there may not be just one best practice. The methodology would also depend on the genre of the book. From my own experience, I would suggest that for knowledge-based non-fiction writing, there is no alternative but to first undertake extensive reading, discussion and note-taking on the subject and related issues.

Then comes the writing phase, where language and rhetorical style are of the utmost importance. An elevated topic calls for a reasonably elevated language, without compromising fluency and reader-friendliness.

As for getting published in India, given the large number of aspiring authors, it is a tough job to get noticed by reputed publishers with a good distributor network. But once a manuscript is read and liked, things tend to get easier.

Who are your favourite authors and why?

Among authors of English titles (other than those on Indian philosophy and literature), here are a few of my favourites: Robert Harris, Doris Goodwin and Hilary Mantel (for their well-researched historical fictions); John le Carre (for his realistic depiction of the shadowy world of cold war espionage); Scott Turow and John Grisham (for their gripping legal novels); Romila Thapar, AJP Taylor, James MMcPherson (for their historical analyses); Carl Sagan and Isaac Asimov (for their scientific works).

Which books are you currently reading?

Only recently, I have finished reading a good historical novel on the Dreyfus affair, titled ‘An Officer and a Spy’, by Robert Harris.

I am now reading an interesting commentary on Vishakhadatta’s Mudraraakshsam. In the pipeline is ‘Gods, Sages and Kings’, by David Frawley (the reputed Western Vedic scholar) – a book I plan to read soon.

What do you do on a day to day basis, besides writing books?

Officially, I am now engaged as a part-time Independent Director in a Public Sector Undertaking under the Ministry of Commerce. I am also a freelance editor and have edited a good number of books on a wide range of areas, such as the India-China War, Environmental topics, Alternative Medicines, Philosophy of Management, a travelogue along the Indian coast, Faiths and Superstitions, a fictional biography of Arjuna, the Brihadaranyaka Upanishad etc.

Whatever time I have left after all these and after my own writing, I devote to my other pleasures, which are music, recitation and casual dramatics.