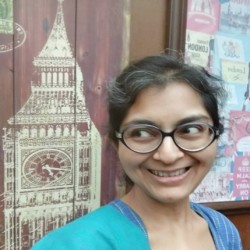 Shrutidhora P Mohor has been publishing with Ukiyoto Publishing Company since November 2019. Apart from contributing to a large number of anthologies she has eight single titles with the publishing house. She is an author whose writings are reflections of some of the deepest thoughts, darkest thrills, and the most compelling ambivalences which reside in human hearts. Raising uncomfortable questions without necessarily providing answers to them and nesting matters of the heart within troubled socio-political contexts are typical of Mohor’s writings.

A student of Political Science, she has been pursuing the discipline as a profession for the last fifteen years in a college in Calcutta. Her academic background enables her to view societal issues with a distinct insight and in the recent past she has been assertively making a case for bridging the false hiatus commonly made between fiction writing as non-serious and academic writing as incomprehensible to the general reader. She actively engages in story-telling in class with considerable success.