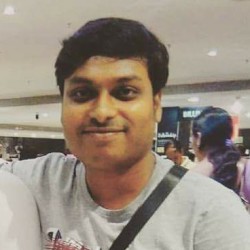 M.H. Rahman, 23, was born and raised in the steel city of Jamshedpur (Jharkhand, India). He pursued his B. Tech. from BIT Sindri, the Government Engineering College of Jharkhand, and is currently working in the Tata Consultancy Services Ltd.

A software professional by day and an author by night, Rahman loves spending his time with his friends and on social media—Facebook, Twitter, Blogger and Writers Carnival, to name a few.

Interact with the author:

M.H. Rahman, 23, was born and raised in the steel city of Jamshedpur (Jharkhand, India). He pursued his B. Tech. from BIT Sindri, the Government Engineering College of Jharkhand, and is currently working in the Tata Consultancy Services Ltd. A software professional by day and an author by night, Rahman loves spending his time with his friends and on social media Facebook, Twitter, Blogger and Writers Carnival, to name a few. He recently released a teaser for his upcoming book Politico and we had an exclusive conversation on it. Below is an excerpt of the same –

What inspired you to bring forth this idea as a story?

Well Madhuri, there are so many things that led to Politico as a story. Firstly, as a writer I always wanted to write at least one character for Mr. Amitabh Bachchan. One fine day, the character of Harshvardhan just came across as one of the many thoughts and I started spinning the story around this character. And I have to say this, for me there’s no one else who could play Harshvardhan better than Mr. Bachchan, so I have dedicated this story to him.

Another important thing that led to this story, was the premise. You know this already Madhuri that I have worked both for India as well as the United States of America in different capacities and at different stages of my life, and I have always wondered how I could represent as well as connect these two great democracies at the same time. Not to mention, both Hollywood and Bollywood have been big influences in shaping me as a story teller. And that’s the beauty of being a writer! What could be better than a story that connects these two?! So Politico is going to be my first of many Indian international stories to come.

Read my review of Rahman’s books-

Is the story fiction or inspired from real life?

Well that’s a tricky one to answer. While the story and characters of are entirely fictional, the backdrop and premise of the story is influenced by modern day politics.

And when is this story planned to release?

Oh my, that;s a long wait! But I have noticed one thing, you always seem to release your stories on the eve of Ganpati Chaturthi. Is there any specific reason for that?

There are many reasons why Ganpati has been a special occasion for me personally. Not many know this, but I came to Mumbai on the day of Ganpati. And ever since, every year I have always made it a point to visit the Siddhivinayak temple with my friends at least once before the Ganpati Visarjan.

I had never known of your religious side, glad to get know about it. Coming back to Politico, what are your thoughts on the current political scenario of India? Do you feel India is progressing in the right direction?

You’re gonna get me into trouble, Madhuri ???? Well I am an artist and an entertainer, and while I try my best to keep myself aware of the politics of our country, I feel I am too young and inexperienced to be opining about the political scenario of our nation right now. Having said that, I do feel we have taken some radical but necessary steps in the country’s development in recent times like demonetisation and implementing GST across the country and I heartily congratulate the Indian government for it.

Second that! Talking about the future, what challenges do you think you will face in completing this manuscript?

There have been and there are still, a lot of challenges associated with Politico. But I have always loved such challenges when it comes to writing a story because they shape me into a better story teller at the end of it. Speaking of challenges, firstly Politico is my first story with Indian characters and backdrop. You all know I have never written any Indian story before this, so when I was beginning this project, it was definitely daunting to think about. And the challenge doesn’t just end there! The story is partially set in India and partially in the United States, so keeping the balance between the two geographies while keeping the tone of the narrative uniform is a big challenge in itself. The dialogues of the Indian characters had to be written the way we speak in India and the dialogues of the American characters have an absolutely American ring to them. Another challenge that is worth mentioning is the topic itself, politics.

Writing a story on politics can lead to a lot of controversies and unwanted intervention. I have tried my best to avoid all of that and my PR team and I hope to continue to avoid them in the future. Also I’d like to mention that Politico is a fictional story written solely for entertainment, please read it keeping the same in mind ????

Thanks for sharing these details, Rahman. We all wish you luck in your endeavor. Would you like to send across any message for the readers?

I really want to thank all my readers who loved my book, Half Life and my online series, The Vampires in my Diaries before that. And they have been waiting ever since for my next story. I hope Politico receives as much love from you all. And I also hope that I have done justice to your expectations of me.

Lots of love and looking forward to your feedback, messages and questions. xoxo ?

So that was M H Rahman for you, author of Half Life and Politico.

Read my review of Rahman’s books-

You can get in touch with Rahman directly at: findme.rahman@gmail.com