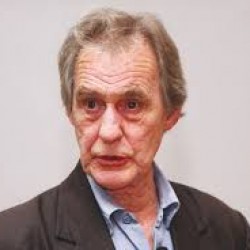 John Keay (born 1941) is an English journalist and author specialising in writing popular histories about India and the Far East, often with a particular focus on their colonisation and exploration by Europeans.

John Keay is the author of about 20 books, all factual, mostly historical, and largely to do with Asia, exploration or Scotland. His first book stayed in print for thirty years; many others have become classics. His combination of meticulous research, irreverent wit, powerful narrative and lively prose have invariably been complimented by both reviewers and readers.

UK-based and a full-time author since 1973, he also wrote and presented over 100 documentaries for BBC Radios 3 and 4 from 1975-95 and guest-lectured tour groups 1990-2000. He reviews on related subjects, occasionally speaks on them, and travels extensively.

John Keay, a Birtish citizen with Scottish descent, a historian, journalist, radio presenter and lecturer specializing in popular histories of India, the Far East and China, often with a particular focus on their colonization and exploration by Europeans is on a visit to Mussoorie a town that he loves immensely. The author of almost 25 books is known as “a gifted non-academic historian”.

Here is an interview with the author where spoke with the eNewsDesk reporter on varied subjects. Here is the full interview.

How do you feel to be back in Mussoorie?

Well because of my family connection with Mussoorie I do feel emotional about it. It was exactly 10 years ago when I was here with my family because of wedding. My Two Granddaughters who live nearby in back home in Scotland were excited that I was going to India and Mussoorie. I would like to go to Sir George Everest House and find out what has changed there since my last visit. It is quite emotional for me as at that time my first wife was suffering from cancer and it was a big question whether she will survive the wedding trip to Mussoorie or not, but she did. She died soon after sadly, so yes it makes me feel emotional. I have connection with Mussoorie going back many years when I was writing about George Everest for the book the Great Arc:  The Great Arc in 1990’s. It is great feeling to be back.

What inspired you to write The Great Arc?

Well I just thought it was such an amazing story that it deserved to be researched. I had heard about this measurement and often thought on how did they mapped or measured this continent. I came across this Great Arc story when I was writing my book on Himalayan exploration in 1970. It was that had so I decided to research on it and it was worth spending a year or so researching on it. I wanted it to a short book and that is how the book has turned into.  The Great Arc book on its release focused a bit more attention towards this part of India and I hope that I have made useful contribution with the book. On all fronts it was lovely book to write.

What prompted William Lambton to embark on the survey of the Great Arc?

Well William Lambton is rather a curious story. He was born in farm in Yorkshire region and went to the North America to take part in civil war. He was on the side of loyalists who wanted to remain the part of British Empire. He helped divide and apportion its land among the British loyalist displaced by American Victory in civil war and was involved in surveying up parts of what are now Eastern Canada, New Brunswick etc.  into properties which people from Loyalist side could be move on and set up farms etc. His regiment seems to have forgotten about him and while he was there he had very little to do so he started teaching himself, learning about scientific techniques of measurement, astronomy, surveying and so on. He was there in 1790’s and then he was posted to India in 1796 to join the forces during fourth Anglo Mysore war against Tipu Sultan. After the war the British required a large chunk of what had been Tipu’s territory and in order to assess their value in terms of commercial product, agriculture etc. a survey was set up and Lambton who happen to know something about surveying was given the task. But this survey was headed by Colin Mackenzie another famous British Orientalist and Lambton proposed not only, they do ordinary Survey but carry out a proper measurement of the territory using the techniques of triangulation and that was genesis of the Great Arc.  First, he was given a certain amount of budget and few staff and two years, to demonstrate how trigonometrical survey might be of some use to government. He had small operation around Madras where he measured his first baseline on the beach and then he started The Great Arc measurement at Kanyakumari the southernmost tip of India in 1802. He started working up on north-south line called 78 Meridian. The survey after Lambton was taken up by his successor George Everest on this North South line all the way up to Himalayas, right up to Dehradun.

It so happens that the place where the 78 meridian crosses is also exactly where Dehradun is now, from where he could measure the last baseline of this triangulation and so Dehradun became his headquarter and eventually, the headquarter of Survey of India.

Later, his own house that was just on outskirts of Mussoorie, overlooking the Doon Valley, became convenient place for this final baseline also very convenient for taking first measurement from his trigonometrical survey to assess the heights of Himalayan peaks.

Mapping of The Great Arc. Do you think British had political interest?

Off course yes, all mapping has scientific and social purpose, but it always has social, political strategic dimension and that is true of any mapping. Scotland were mapped by William Roy immediately after the suppression of Jacobi rebellion in 1745 and similarly Mapping of India it was done keeping with political intentions.

I don’t think he ever did because you can’t see the peak from Dehradun. He really was not particularly interested in measuring the mountain peaks. He thought that using The Great Arc to measure the height of mountain was really a kind of a bit of distraction. The Great Arc was important in his view because it helped to reveal the precise curvature of the earth and because it  was basis of mapping India. He couldn’t see the value of taking measurement to every peak and try to work out which was the highest. I am pretty sure that he never went anywhere near Mt Everest itself. It is conceivable he might have glimpsed it somewhere in Bihar or Eastern UP, but it wouldn’t have struck him as the highest mountain at that distance.

Who then measured the height of Mt Everest?

His successor, the superintendent who identify the Mt. Everest world highest mountain and named it after his predecessor George Everest.

You have written about India and China both. What do you think about the India-China relationship?

I think China and India are so totally different. It is quite difficult to make straight forward comparison between the two. There are few inscriptions but basically there is no history of India before about 1200 but China is completely opposite. The Chinese tradition is to record everything whereas Indian tradition is always record as little possible is the difference that strikes immediately.

I can’t pontificate on politics, but Chinese are certainly being making all the running and the schemes they have for China-Pakistan economic corridor. The Chinese presence in Srilanka, East Africa is also going to make a big difference to strategic balance between India and China.  I am sure that Indian officials are aware of the threat but there doesn’t seem to be any clear idea of how to meet it.

I think I heard somewhere the other day that they were talking about sorting out frontier in east and signing some formidable agreement. So, there does seem to be bit of progress, but nothing is official yet. China is very unlikely to put themselves in position where they can be held hostage by India on basis of some new agreement, so I think although the chances of agreement immediately are not terribly good.  It is said that the Chinese government   were willing to trade the frontier in east in Arunachal for an Indian Agreement that their Chinese adoption of Aksai Chin in Ladhak would but Indian govt refused it and until that is sorted, I don’t see that how Himalayan frontier border could be relaxed and lead to revival of trade. So, there is lot to be done from both sides. I don’t think Indian govt has given China that priority it deserves.

I have high regard for Indian historians, they are wonderful, and there has been excellent research, but I think that the problem with Indian History is that it has become two academic. My background is as a writer not as an academician. I try to make living from it and to do that you have make effort with the writing to appeal, entertain and engage the reader to sell books. All the great history in English language tradition is done by writers who were not historian. Most of these English history writers wouldn’t have got job in universities in England. Christopher Hibbert is fine example and he never had anything to do with academic world.  I think Indian historians are interested writing for other historians not for public.

You have written lot of books on Himalaya. From where does this attraction comes?

Well my next book is on Himalayan region but not just great Himalaya but what I call Himalasia.

The whole Himalayan region including Tibet, Pamirs, Hindu Kush,Tzakistan,is a eco area in itself and deserves the same attention and interest as say Amazonia, Equatoria or Antarctica.  Our perception of this region has lot of high mountains and uncertain frontiers is misleading. In fact so many of the constituent parts of Himalyan region have awful lot in common despite the fact that some countries are Buddhist, some Muslim and some Hindu. The historical and cultural region reach way back to beyond when people identified themselves by particular religion so idea is to make a case for looking at the whole area of inner asia that is above 4000 metres  as an entity in its own right. There is need to address the issues of climate change, improving water resources and to encourage cultural exchange between the constituents in Himalasia. The Book is not any kind of narrative but would much more like a survey an overview of the whole region.

The George Everest House is in bad shape in Mussoorie. What do you think should be done?

So I am told. The house from where George Everest conducted the survey is really piece of important architecture of 18th and very early 19th century and not many such houses are surviving in India. The fact that it was acquired by Everest who not only made it his house, but it was also a sort of headquarters for great trigonometrical survey does give it enormous historical and architectural interest the state government should secure the area and try to convert into something worthwhile such as Museum or center for scientific learning for school kids etc.