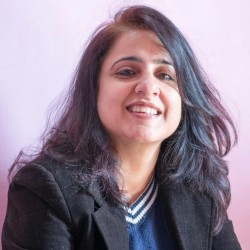 Kalpana Mishra is a Deputy Director in the Government of India. She’s also a visiting faculty to a number of government institutes, schools, colleges and universities, spreading awareness about various issues like gender sensitisation at work place, other gender issues, communication skills, etc., and also a frequent blogger.

An Interview with Kalpana Mishra, Author of Love Forever @ Rajpath

Today, we’re very happy to welcome Kalpana Mishra, an author who hails from Delhi with whom we carried out an interview. Kalpana recently had her debut book entitled Love Forever @ Rajpath published and she told us more about it. Continue reading to find out what Kalpana who also happens to be a Deputy Director with the Government of India, had to say.

Please tell us about you. Where are you from? What is your professional background and how did you become an author?

I am a Dilliwali, a born Sindhi, married to a Bihari, So basically, a “Delhi ki Beti” and “Bihar ki Bahu”. I graduated from ARSD College, Delhi University, and did a Masters in Business Administration from Indraprastha University. Basically a shy character, my professional life took a steep U-Turn when I joined the cultural Society of my College. The Theatre, both street and stage plays that I did with them gave my talent quotient the wings to fly high in the sky. I started writing during my college days. At first, I wrote Hasya Kavitayein only for fun, but took it seriously when I got my job and realised that there is an Office Magazine, where we could give articles or short stories in both Hindi and English. I wrote short stories, reviewed a number of books on my blog “booktalereviews.blogspot.com” and slowly graduated to “Love Forever @ Rajpath” my debut fiction.

What type of books do you write?

This is my debut book. Although being a love story at its core, it deals wth two very important social issues, viz, “Zabaria Shaadi”, which is an offshoot of dowry issues, and “construction of Public Toilets” especially for women, which according to me is the root cause of issues like eve-teasing, rapes etc.

I would like to write on social issues. However, to me, no one can survive without love, as love is the Central Emotion to all the Feelings. Hence, my next would again be a story, with love as the central theme and taking up yet another social cause.

Can you please tell us a bit about your book titled Love Forever @ Rajpath, its overall plot and the key characters in it?

Love Forever @ Rajpath begins when Shalini & Kartik after competing with a few lakhs, join a Government job. Shalini, a Delhiite belongs to a middle-class Sindhi family. Unlike other girls of her age, she is very career oriented and is not interested in getting married. On the contrary, she is scared of marriage as she has read articles regarding martial abuse. So, when her parents approach her, she refuses till she is swept off her feet by her colleague, a Bihari babu Kartik during a study tour. Her mother plays an important role in her life when she helps her reach the decision to join the office training that would prove beneficial for her career. She tells her that “we have not brought you up in a conservative environment and we have given you enough wisdom to help you understand what is right and what is wrong for you”. Just when the two Government love birds profess love for each other, Kartik goes missing. Shalini’s search for him takes her to a remote village in Bihar where she discovers a societal abuse called “Zabaria Shaadi”, where the boys are forcibly abducted to be married off without consent. Although, with the help of the Police and Kartik’s younger brother Dhiraj, she is able to rescue him, only to find that his eldest brother Pawan was the actual villain and loses him again to a legal battle with his family elders. Dhiraj supports her throughout, even when Kartik vows never to speak to her again.

As far as overall characterization is concerned, it was a conscious decision to make Shalini the “SHE HERO” and to show her emancipation from a shy girl next door to a mature and independent character. I think our country needs girls like her today. On the other hand, Kartik’s character could be found in each one of us, where the character is sandwiched between right and wrong; between age old traditions and his family on one side, and his own liberated opinions on the other. It also reflects how each one of us has grey characters within us. The mother’s character shows how selfless the mothers always are, sometimes assertive for their children’s good. I had based two of my characters on Mahabaharata. Dhiraj’s character is like the Character of Karna, who wants to be with the right, but is forced to be on the wrong side, and the character of Pawan, the eldest brother, who is based on the character of “Yuddhishthir” who had sold off his brothers for petty gains.

Are you working on any other book(s)? If so, please tell us what we can expect to see from you in the future?

The story of my next venture is still in conceptualisation stage and am about to pen it down. Promotion of my book is what is keeping me busy. However, my next book too will be woven around a social cause.

I just keep my basics clear, and jot down the sequence of my plot, the basic outline. So, I know how I want my story to flow. Once the basic flow chart is ready, I keep expanding on it. Obviously, during this expansion, the story takes a number of twists and turns, keeping the basic structure intact.

I am a Group A Officer in the Government of India, so as such there is no fixed time for me to write. However, I do make it a point to write everyday, even if it is for an hour, and I do it mostly when I am teaching my kids. I am sure, watching their Mumma study along with them, inculcates reading and writing habits in my kids too.

Other than 3Ds, Dedication, Determination, and Discipline, I do not follow any rule, neither in life, nor in writing.

From your experiences, could you please share 2-3 top tips to help beginner authors who want to publish a novel?

I would just say follow these 3Ds and never give up. I have met authors and chatted with a number of youngsters who come up to me only to tell me that they have left their effort half way as they don’t feel like continuing. My message to all of them is to be patient and give yourself time. If on a day, you don’t feel like it or you just want to drop the story; wait- re-read, I am sure you will get your ideas and the block or the discontentment will just go out of the window.