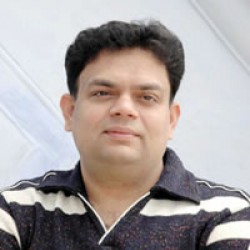 Yatindra Mishra was born on the 12th of April 1977 in Ayodhya. He has three collections of poetry to his name – Yada Kada, Ayodhya Tatha Anya Kavitayein and Dyodhi Par Alaap – besides which he has written a book on the classical singer Girija Devi (Girija) and a book of conversations with the dancer Sonal Mansingh (Devpriya).

His book on Ustad Bismillah Khan, Sur Ki Baradari, is soon to be published by Penguin (Yatra) Books. His compilation of Gulzar’s poems, Yaar Julahe, will be published next month by Vani Prakashan.

Yatindra Mishra has four collections of Hindi poetry to his credit – Yada Kada, Ayodhya tatha Anya Kavitayein, Dyorhi par Aalap and Vibhas. As a music and film critic he has also written Girija (the life  and works of thumri singer Girija Devi), ‘Devpriya’, ‘Sur ki Baradari’ and ‘Humsafar’. His Meelon Se Din won the Best Publication Award for year 2010. He has also translated the twelfth century Lingayat mystic poet Akka Mahadevi’s Vachanas in Hindi language, titled Bhairavi. Translations of his English writings have been well received in German, Urdu and English languages. He is a recipient of numerous awards including Bhartiya Jnanputha Fellowship. He has worked as a Chanel advisor of DD Bharati New Delhi for the term 2014-16. Recently he published a book on the Musical journey of the Legendary playback singer Lata Mangeshkar titled Lata: Sur-Gatha.

(translated from Hindi, by the interviewer)

WHAT ARE YOUR INSPIRATIONS WHEN IT COMES TO YOUR WORKS BECAUSE YOU HAVE WRITTEN OVER A VARIED RANGE OF TOPICS, FROM ABOUT AYODHYA TO MORE RECENTLY ABOUT LATA MANGESHKAR?

I’ve been a poet from the beginning and I’ve always written poetry in Hindi. I write about political and social issues and about cultures, how cultures are changing. But later I had the urge to write about art forms. I’ve written on Bismilllah Khan, Girija Devi and recently on Lata Mangeshkar and her music journey in ‘Lata: Sur Gatha’. But I am primarily a poet, and I write from the perspective of a poet.

WHAT ARE YOUR VIEWS ON THE STATE OF HINDI LITERATURE IN INDIA TODAY?

Nothing is dying out, I think that’s a clichéd and over hyped phrase – that it’s happening. Literature doesn’t die. The medium changes. We used to read paperback books, now we read on kindle, we read on Facebook, we read blogs; so the medium, the expression changed, it has become more democratic. We used to go to publishers and editors earlier who would reject it. Today you can write your poems on blogs and express yourself, and get people who appreciate your work. There is a different cyber culture today – every newspaper uses the online medium to get articles out as well. So I think this is a lot more democratic because people get to have their say more. But I don’t think literature died out. Just like in case of cinemas, we say that the Golden Age of movies is dead and gone, but it’s still there. So the expression of thoughts have changed with the times; and with every age the questions asked change, and their impact changes. Every age has its own ideologies, and the questions to be asked have been modified as well. For example if we talk about the independence of our country today, we’d talk it in the context of us celebrating 7 decades of freedom. However if we went back in time and talked about it in 1947, then we’d be talking about just achieving it. So similar is the situation in case of literature. If you talk about Bibhutibhusan Bandyopadhyay and a writer of today, there would definitely be a stark difference in styles of writing, and what they write about.

IS THE GOVERNMENT AND THE AUTHORITIES ON THEIR PARTS TAKING ENOUGH INITIATIVE TO PROMOTE HINDI LITERATURE?

I think that English is a global language which is important to know. But if you write in any language, like Kannada, Bengali or Hindi, if you want a ‘widely acclaimed’ case then you’d have to get it translated in English in a pan-Indian scenario. Regional languages have its’ own beauty. If there is a famous Bengali poet, even if you have read a French translation of his works, you will still acknowledge him as a Bengali poet. Every language has its own sweetness. What is need is vocational training. And training should be such that you benefit from learning such a language, where you can use it to get a job, make a living, do business. The language which you can’t use to make a living would slowly die out. No fault of literature in it.

IS THE HINDI SYLLABUS IN THE CURRENT EDUCATION SYSTEM ENOUGH TO IGNITE THE MINDS OF THE STUDENTS AND INTEREST THEM IN THE SUBJECT?

Why not? Even my work on Bismillah Khan is taught as a part of the CBSE board curriculum. So it’s not that the Hindi syllabus is not good enough. I think it’s a matter of thought merely and we’re suffering from a syndrome where English is considered a language of the elite. You should be proud of your mother tongue. It is my identity that I am a Hindi poet and on that footing do I stand here today in Kolkata. Kolkata Literature Festival has called me today in my capacity as a Hindi poet, and I was asked to give a performance in my own language and that’s a big thing. I have not been called in the capacity of a writer of a different language. So the first and most important thing is to be proud of one’s native tongue.

I have translated works from Kannada. And the fact that people are not studying Hindi or Bengali or Tamil or other native tongue in plus 2 does not mean that we stop writing in those languages. To inspire more people to write, we need more campaigning, we need more awareness at the social level.

WHEN IT COMES TO TRANSLATIONS LIKE YOU HAVE DONE YOURSELF, DOES THE NEW TEXT NOT LOSE THE ESSENCE OF WHAT WAS BEING EXPRESSED IN THE ORIGINAL WRITING, WHICH IN TURN MAKES THE TEXT LESS INTERESTING AND LESS APPEALING TO THE READERS?

For this we need a lot of work at the social level, at the grassroots and school level, volunteer workers to go in and kindle their interests. And most importantly the onus is on the families that teach their children to respect their mother tongues. If you are a Bengali then your family should make you understand the importance of Bengali. That doesn’t mean that you don’t learn other languages, because those will help you progress in life. However there should be love for your own language.

A WORD FOR THE YOUNG READERS TODAY…

They should read a lot. And they should focus on what others are writing in different languages while respecting your own language. And always be on the lookout and find and stay with good literature if you can.