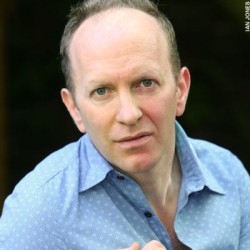 Simon Montefiore's ancestors escaped from the Tsarist Empire at the turn of the century and sparked his lifelong interest in Russia. As a correspondent in the early 1990s, he covered the wars and turbulence of the fall of the Soviet Union - from Georgia and Chechnya to Moscow and St Petersburg.

As a historian, he has spent the last ten years researching the Russian archives. The personal stories he found there and his interviews with families continue to inspire his fiction and non-fiction. Born in 1965, Simon Montefiore lives in London with his wife, the novelist Santa Montefiore and their two children. For further details about the author and his books.

AUTHOR INTERVIEW: Simon Sebag Montefiore reveals his passion for a form of writing that will never die

A written letter conjures up a feeling of nostalgia. It is a raw form of communication, demanding far more effort than typing out a WhatsApp with the swoop of your thumb. It posits the writer in a space to ponder and craft, demanding thought and planning and a very real understanding of emotion.

“Letters are the literary antidote to the ephemerality of life,” as Simon Seabag Montefiore writes in the introduction of his latest contribution to the world of books, Written in History: Letters that Changed the World.

An avid writer and, by default, reader of letters, the historian and award-winning writer’s anthology of letters immediately enthralled me. The fruit of a lifetime of reading, Written in History is a selection of 103 letters from across the ages.

I meet Montefiore at Glenda’s in Hyde Park during his trip to SA to promote his book ahead of the Kingsmead Book Fair. Wearing a dark blue shirt adorned with tiny white polka dots, he has an assured calmness about him, coupled with energetic enthusiasm. I ask him how his latest book relates to his previous books.

“It’s a pure passion project. I literally wrote this book for fun and to give pleasure to other people. It’s linked to my other books, it’s just that all my books are based on original sources — my history books on Jerusalem and Stalin and the Romanovs — and they’re based on letters mainly from the archives so that’s what gave me the idea for this book.

“So in one sense there’s a link but in another sense this is something that is very easily digestible, very easily accessible. It’s light, it’s fun, it’s meant to be entertainment. It’s got serious aspects but also there’s some mischief in the book.”

Montefiore carefully selected which letters to publish with the help of his 18-year-old daughter, a process he describes as immense fun. The final selection touches on all the spectral lines of humanity, from love and loss to courage, liberation, destruction and war.

We learn from Frida Kahlo’s letter to her husband Diego Rivera that she loved him fiercely and passionately, despite divorcing him 10 years after marrying him. Comparing their love to a Mexican landscape, she evokes violent flashes of lightning and the dampness of earth to describe him.

A Czech mother chooses to follow her limping son into an extermination camp at Auschwitz for instant execution and writes a letter to her husband in her final minutes, instructing him and their other son to “have a fabulous life” just before they board the trucks that will deliver them to their final destination.

“I wanted to do something that is filled with new aspects of characters and events everyone should know but really it’s just designed to be a delicious treasure chest of fascinating delicacies that everyone can enjoy,” says Montefiore.

In a letter addressed to Adolf Hitler, Mahatma Gandhi appeals to his humanity, asking him to make an effort at peace which will mean much to the “millions of Europeans whose dumb cry for peace I hear”.

On the opposite spectrum, Emmeline Pankhurst writes a letter to the Women’s Social and Political Union in 1913, calling on all women be militant in the fight for suffrage as it is a “moral obligation”.

Written in History offers a platform for voices of all races, sexes and convictions across cultures and countries. From the ancient civilisations of Egypt and Rome to the modern incarnation of the world as we know it, you can read about the inner workings of mass killers, poets, doctors and activists.

According to Montefiore, this was 100% his intention:

“I wanted to do an anthology that is truly international, with a lot of really remarkable women writers and all kind of races and all continents so there are a lot of people of colour in this selection that people might not know about. There is Mandela but there is also Toussaint L’Ouverture, for example, who was the first slave rebel leader of the Americas and General Abram Hannibal, the first black general in Europe.”

A second edition of the book will be coming out in September. It will include an additional five letters but in the introduction, written in the form of a letter, the invitation to write to the author will be taken out.

“I’ve changed that because I’ve had so many letters from all over the world. I’ve had to answer all of them, which is a pleasure. They’re always turning up and they’re really amazing. I’ve had them from all over the world and it hasn’t even come out in a lot of countries yet. I have to stop it soon or else I’ll never do anything else but reply to people, but it’s really nice of people to write, so anyone who wants to write is very welcome.”

This stands as a testament, perhaps, to the timelessness of the letter and the way in which, thousands of years after its invention, it still connects people.

I ask Montefiore if there is a special message emanating from his book?