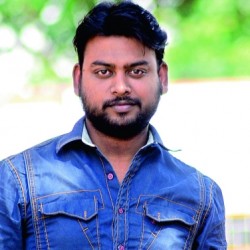 The author neither has a big brand of IIM or IIT backing him nor is he a well-known personality with credible achievements in film, theatre, music, sports, culture, and bureaucracy or in corporate India. He never has visited a foreign land nor does he have an overseas work experience of any kind. His blog has never been ranked among the top 100 blogs in the country owing to the simple fact that he doesn't blog.

And one important thing, his earlier novels were not blockbuster hits or runaway bestsellers as this one being only his debut novel. His work has never been published in the past by any leading publisher (including the imprints) or has been represented by any agent before.

He doesn't work with a national newspaper or a leading national magazine or lifestyle magazine as a full time employee or as a regular features contributor one or the other. He neither has won any literary award nor holds some kind of PhD in creative writing either. He is just a small town boy with a very big dream of becoming a storyteller someday.