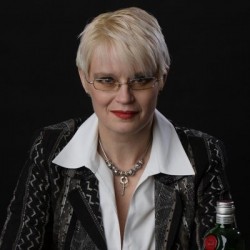 Zoë Sharp was born in Nottinghamshire but spent most of her formative years living aboard a catamaran on the northwest coast of England. After a promising start at a private girls' school, she opted out of mainstream education at the age of twelve in favour of correspondence courses at home.

Sharp went through a variety of jobs in her teenage years. In 1988, on the strength of one accepted article and a fascination with cars, she gave up her regular job to become a freelance motoring writer. She quickly picked up on the photography side of things and her photojournalism took her as far afield as Japan and the United States, as well as work all over Europe, Ireland, and the UK. She is now a full-time fiction author and creator of the Charlie Fox series of crime thrillers.

Sharp wrote her first novel when she was fifteen, but success came in 2001 with the publication of KILLER INSTINCT—the first book to feature her ex-Special Forces turned bodyguard heroine, Charlotte 'Charlie' Fox. The character evolved after Sharp received death-threat letters in the course of her photojournalism work.

As well as the Charlie Fox novels, Sharp has written several standalones, including collaborations with highly regarded espionage thriller author, John Lawton. Her short stories have been published in anthologies and magazines, and have been shortlisted for the Short Story Dagger by the UK Crime Writers' Association. Her other writing has won or been nominated for numerous awards on both sides of the Atlantic, been used in Danish school textbooks, inspired an original song and music video, and been optioned for TV and film.

If you’ve not yet heard of Zoë Sharp, don’t just read my review of Riot Act, listen to what Lee Child said, “If I were a woman, I’d be Zoë. If Jack Reacher were a woman, he’d be Zoë’s main character, Charlie Fox.”  (‘Nuff said.)

Seeley James: Were you looking for a new dimension in your central character when you created Kelly Jacks?

Zoë Sharp: I wanted to explore different aspects of a different character, that’s all. I’ve now written ten books in the Charlie Fox series, plus a number of short stories and a novella. I wanted to see if I could break away from such a well-established series and create a new heroine who would be just as appealing as Charlie, but very different from her. Kelly was a respected crime-scene specialist with a talent for her work, when she suddenly found herself on trial for a crime she can’t remember. Charlie is someone who was perfectly suited to the military, but found herself thrust back into civilian life and struggled before she found her niche as a close-protection officer. Kelly was ripped away from her normal life and forced into the brutal prison environment of prison. Both are survivors under pressure, but they don’t go about that survival in the same way at all.

Q: Did you have an objective in mind when you wrote The Blood Whisperer?

A: Mainly, not to make a hash of it! The whole thing was a challenge. I’ve always written the Charlie Fox books in first person, whereas for THE BLOOD WHISPERER The Blood WhispererI needed to work with a close third-person narrative. At its heart, TBW is a book about trust in all its forms, and getting that theme to work on a number of different levels was one of my objectives. At the start of the book Kelly has to learn to trust again — her own instincts, her former colleagues in the police, old friends and new possibly dangerous acquaintances. I had a lot of fun writing it, though.

Q: Will we see another Kelly Jacks book?

A:  Hmm, well I intended it to be a standalone, but since the book was published I have had a lot of requests for ‘the next Kelly Jacks’. I’m not ruling it out, but I have other characters I’d like to introduce first. Other characters who share some attributes with Charlie and with Kelly — when things turn nasty their first instinct is, for various reasons, not to go to the police. And, of course, I’m about to start work on the next in the Charlie Fox series, as well as finishing off rewrites to a supernatural thriller, and I have a trilogy milling around in the wings. Busy time ahead.

Q: Did you outline The Blood Whisperer?

A: I did outline, quite carefully. How much of that original outline survived to the final version is another matter. In fact, I rewrote the ending quite substantially from the original draft, and I think the book is much stronger for that, but I’m really too close to it to be able to tell. Generally, I’m very flexible in my outlines. I like to have the main events of the story firmly in my head, like a backbone, but I leave the reactions of the characters to those events fairly vague, so they can take shape in a more organic way. I don’t plan great biographies for my characters before I begin. Until I meet them on the page, I don’t know them well enough to do it. So, all my outlines have ‘E&OE at the bottom of them in very small print — Errors & Omissions Excepted.

Q: When you write a new scene in a fresh location, how do you set the stage for the reader?

A: In the broadest brushstrokes I can manage that still give one a sense of the place. I want to take snapshots that capture a feeling, an atmosphere, not portraits that take hours to light and stage. I’m a skip-reader, so I try to follow Elmore Leonard’s advice to leave out the parts that readers would skip — or that I would skip myself. Reading a passage of description out loud is usually enough to tell me if it’s too long. If I start to rush through it, I know it needs cutting back.

Q: How do you like to convey a character’s interior thoughts/feelings about a situation?

A: By reaction rather than a great long inner monologue. I try to avoid too much Riot Act, a Charlie Fox Novel on Amazonnavel gazing. It’s very easy to have them wallowing in introspection, almost to the point of self-indulgence. I allow Kelly one period of feeling sorry for herself, when she thinks she’s been betrayed on all sides — and particularly by the one person she really wants to trust. Then she gives herself a proverbial kick up the backside and gets on with it.

Q: How do you write dialogue? Does it flow onto the page or do you script/imagine/conjure motivations first?

A: This is one area where I find making pencil notes before I write a scene really helps. I have a mental image of roughly how I want a conversation to go, and then I write it in note-form, almost as a script. As I transfer my notes to screen I flesh them out and edit as I go.

Q: Do you use a professional story and content editor? If so, what do you expect of him/her?

A: What I expect from an editor first of all is an overview of the story as a whole, as much as the small stuff. Do the characters engage the reader? Does the story arc work? Are the elements of the plot —and the reactions of the characters to that plot — believable? Does the pace flag? The nitty gritty of spelling mistakes and typos are much easier to work on, but it takes a serious reader to advise on the mechanics of the story itself.

Q: What are your pet peeves or clichés in mystery/thrillers?

A:  Weak female characters always annoy me — or ones who are only there to have sex with the hero and either be the subject of a dramatic rescue, or die uselessly in order to provoke him to revenge. And I dislike silly mistakes that could be easily avoided, although we all make them. Just been listening to a UK-set police audiobook where they had the police doctor referring to an autopsy at the morgue — very American — instead of a post-mortem exam at the mortuary.

Q: What part of writing a story do you find the most difficult task?

A:  I spend a lot of time looking for my jumping-in point. The start of the book is never the start of the story. A lot has happened before the reader joins the narrative, and deciding on that point can be a very difficult task. It’s one of the reasons I always write my own flap/jacket copy synopsis before I begin, because this tells me how much advance knowledge the reader will bring to the story. After that, the hardest part is usually the third quarter. You’ve set the scene, built up the tension, and now you have to start rounding the story off to its conclusion. Do it too slowly and you end up with an info-dump at the end to tie everything up. Do it too fast and the ending is a disappointment to the reader because they already know everything that happens.

Q: What was the last book you read that blew you away?

A: In non-crime, probably THE BOOK THIEF by Markus Zusak, which is narrated by Death himself in an unusual and quite beautiful way.

And in crime, A LITTLE WHITE DEATH by John Lawton, in his Inspector Troy series, set in the 1960s during a scandal very reminiscent of the Profumo Affair. Meticulously details, fully formed and with a melancholy air that haunts long after the final page is turned.