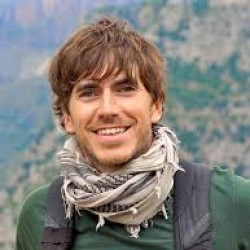 His last series was Russia (2017). Simon has received a One World Broadcasting Trust Award for 'an outstanding contribution to greater world understanding', the prestigious Ness Award from the Royal Geographical Society, and the Special Contribution Award at the Travel Media Awards.

An Interview with Simon Reeve

A journalist, an author, a now a TV presenter. How did that happen?

I started my little career as a post boy at 18. Then I started doing research – and onto very important photocopying, picking up packages, and gradually into online research and the giddy heights of cub reporter! And what an education it was too! I didn’t go to university so it was my formative experience, though I hear Uni is lots more fun, more sex and things… certainly more than at the Sunday Times.

When did you start travelling?

I did a bit of travelling while working at the Sunday Times, but only when I was doing research into depressing subjects like arms smuggling, drug smuggling, and terrorism – there was a lot of smuggling going on… but I’d never been on a plane until then.

What’s the motivation behind your journeys?

It’s not been about the travel as such as about the stories and the people you meet. And about the knowledge, as ridiculous as it sounds, I like broadening my mind and finding things out. Why is life like this in Paraguay? In India? I want to know!

Do your encounters with locals affect you?

I remember them in different times and places and think of what I learnt from them. You’d have to have a heart of stone not to empathise with the people you meet on these journeys. I do wake up crying sometimes because I’m thinking about someone. They are very intense experiences.

Which one story touched you the most?

We’d been travelling through Congo, the scene of the most violent conflict since WW2. There’s been unimaginable human suffering there but also overwhelming beauty. We met Fatima in a refugee camp on the border of Somalia and Kenya. Fatima had grown up there, stuck there, but having been educated by the aid agencies who operate there she was so fantastically worldly. We discussed the state of the world, everything… and she’d never left this camp. It hit me hard.

How do you deal with the culture shock after five months on the road?

This is my home. I feel more British and European the more time I spend abroad. I cherish and enjoy this country even more. I see the positive in things now. Ok, it’s pissing down with rain but that’s a good thing and I see that now. I think I appreciate Blighty a bit more now…

What do you miss the most?

I miss family and friends. My wife has been working on some of my recent programs so that’s the key relationship issue covered!

Anything you pack to remind you of home?

I do take marmite sometimes and I have started taking tea with me which makes me feel about 90!

What can’t you leave home without?

Mainly boring things – laptop, digital camera and ridiculous quantities of things to read! I’ve been trapped so many times being ill or being stuck by flash floods or something like that for days, or weeks and you need something to pass the time.

Is there anywhere you would never consider travelling to?

The main threat on these journeys are mundane - like dying in a traffic accident. I’m careful about the vehicles we’re in. I like to have seatbelts and I don’t like pissed drivers, which happens.

When did fear last strike?

Fear strikes me regularly! There have been endless times when we’ve had such narrow misses, you drift into acceptance thinking right that’s it. I’m going to die now.’

I nearly died of malaria in Gabon. I was extremely scared. I was retching blood and had a temperature of nearly 40. I was incoherent and thought I wasn’t going to make it. It was a real reminder of the fundamental risks of travelling off the beaten track.

Have you ever been shot?

I was vaguely shot - by ‘vaguely’ I mean in my general direction. It was business – not personal. I survived. Having said that, the next BBC crew that went to Mogadishu had their producer killed… We represent the outside world and some people want to keep it out.

Africa is my favourite continent. The trip was exhausting in all senses but also wonderfully rewarding.

What has been your most bizarre experience to date?

In southern Columbia, in a beautiful park in a very dangerous part of the country… There were piranhas in the water, crocodiles on the river bank, more poisonous snakes than you can possibly imagine, right wing death squads wandering around killing people, left wing guerrillas, the drug cartels and if that weren’t enough, the Americans carpet bombing and the Columbian army coming in to try and kill anyone left… I spent a sleepless night as tarantulas the size of dinner plates crawled around our hammocks.

We are filming for the Tropic of Cancer now. I just came back from Lybia. We became the first people to cross the Mauritania into southern Algeria in 35 years.