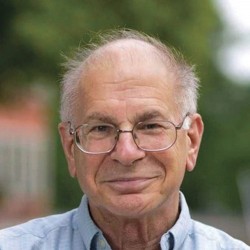 Daniel Kahneman‎ (born 5 March 1934) is an Israeli-American psychologist and winner of the 2002 Nobel Memorial Prize in Economic Sciences, notable for his work on behavioral finance and hedonic psychology.

Daniel Kahneman won the Nobel prize in 2002 for insights from cognitive psychology that provided the basis for behavioural economics. IPE’s Daniel Ben-Ami spoke to him about his role in developing the ideas that underpin the burgeoning field.

IPE: Perhaps you could start by talking about the history of behavioural economics. Many younger people in particular either think it is completely new or that it has been around for ever. How did you develop the idea?

Daniel Kahneman: I didn’t develop the idea. As it exists now, with the current people who are the leaders of it, you have to trace the career of one man – Richard Thaler [now a professor at the University of Chicago]. He is the leader in behavioural economics. He was influenced by our work and we became friends and collaborators. And he influenced economics. It’s not that we influenced it. We made life easier for him because Prospect Theory was published in a prestigious journal. But the main thing that happened was that Richard Thaler began behavioural economics. And he began behavioural finance. I think he is a genius and he has had a number of very important ideas. I’m sometimes called the father of behavioural economics but I certainly am not. I’m the grandfather, in a way. Or the grand uncle. I’m off to the side. But this was a development within economics.

I recently heard a lecture Richard Thaler gave at the London School of Economics and he gave a lot of the credit to you.

That’s very nice of him. I deserve a lot of the credit because he was influenced by us. He sought us out. There is a founding text of behavioural economics which is a paper that Dick Thaler had published in 1980 called ‘Towards a Positive Theory of Consumer Choice’. That paper applied Prospect Theory. So he used our theory to explain phenomena that he had observed. That is really the division of the credit. We had the theory and he saw that the theory was useful to explain phenomena of individual choice that contradicted standard economic theory.

You and your former colleague Amos Tversky were psychologists. So you developed the psychological theory which then became the backdrop to behavioural economics?

Yes. What Dick Thaler studied was consumer behaviour. It was individual behaviour. But he looked at it from the point of view of an economist. And he saw that it contradicted economic theory. That was his contribution. And he took it from there.

Oh, yes. The difference between behavioural economics and standard economics is really in the assumptions. And the way it’s been done is not that they give up rationality completely. They tweak the theory, they add complexity to the rational model to make it more realistic.

I’ve noticed that you seem to be careful to avoid talking about ‘irrationality’.

I hate the word.

But there are psychologists who do talk about irrationality.

Yes, Dan Ariely [of Duke University] and others. Irrationality to me implies something else. Impulsivity, emotionality and so on. The kinds of things that we mostly talked about are cognitive errors. They are not rational in the sense that rationality is defined in standard economics, which is a definition that psychologically is completely implausible. It demands a completely comprehensive view of everything going into the future and internal consistency. In a way rationality, as defined in economic theory or decision theory, is psychologically so unrealistic that it is irrelevant. This is what’s false. The fact that people are not rational but this very narrow definition really doesn’t mean that they are irrational.

This gets to the nub of the question. Could you spell it out a bit more?

Well there are characteristic differences. The brain, the mind, has a characteristic way of operating and it’s strong in some areas and relatively weak in others. It’s very good at constructing stories and perceiving causal relationships. Creating a coherent interpretation. It is relatively weak in statistical reasoning and thinking about ensembles. And in drawing inferences from the general to the particular. There it’s not strong.

So the root of it is in our cognitive limitations?

Yes. I argue the roots of it are in the characteristics of System One [quick and automatic thinking], which typically deals with individual stories and it’s about specifics. Where it is characteristically weak is in the outside view: statistics, base rates, regression to the mean. A lot of these phenomena are basically non-causal but they are statistical.

Maybe I can ask you about the counter-arguments from some economists? One is that they say they don’t argue that humans are always rational. They simply have an economic model that assumes a broad rationality in terms of human behaviour.

I am not in it to argue with economists. I’m a psychologist and let the economists fight their own battles.

What about another view, which is that people can get together and reflect on their decisions? So big decisions can be part of an interactive process.

Empirically, the most important decisions are rare. And we don’t have an opportunity to learn. And we are not good at learning unless the consequences are immediate. In the real world we are very good at learning to drive. It’s a narrow system with very clear rules. We don’t have the opportunity to learn when it comes to important decisions. The outcomes are too far away and there are too few of them. So there is no mechanism for learning.

What about corporations, where the board usually discusses key decisions? Are they prone to the same sort of errors?

In some respects they are better and in some respects they are worse. If you have a group of individuals who all make the same error they are likely to become more confident in their error. They tend to be more extreme than individuals. One of the things I find surprising is how little time they spend on effective group processes. For example, how much attention they pay to meetings. But you have the feeling there is an art and science of how to conduct meetings and people should give more thought to it. By and large, this is not a general norm in the business world.

How do you feel about what started off as a psychological theory being taken up by economists and financial institutions?

I’ve always believed that luck is a very big factor in life so it enhances my belief in the role of chance. I’ve been very lucky.

Even if there is luck there must be something that predisposed people to being interested in your ideas.

I notice you are always careful to give credit to your deceased colleague Amos Tversky.

Yes. There is a book coming out in December by Michael Lewis on Amos Tversky and me [The Undoing Project: A Friendship that Changed Our Minds (WW Norton)].

The writer of Liar’s Poker, Moneyball and the Big Short?

And if there is a movie do you know who will play you?

I have no idea but I’d like it to be Brad Pitt.