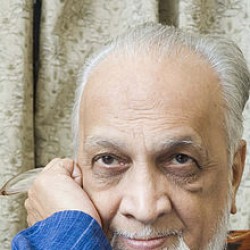 Vijay Dhondopant Tendulkar was born on January 6, 1928 in a Bhalavalikar Saraswat brahmin family in Kolhapur, Maharashtra[citation needed], where his father held a clerical job and ran a small publishing business. The literary environment at home prompted young Vijay to take up writing. He wrote his first story at age six.

He grew up watching western plays, and felt inspired to write plays himself. At age eleven, he wrote, directed, and acted in his first play.

At age 14, he participated in the 1942 Indian freedom movement, leaving his studies. The latter alienated him from his family and friends. Writing then became his outlet, though most of his early writings were of a personal nature, and not intended for publication.

Vijay Tendulkar was a leading Indian playwright, movie and television writer, literary essayist, political journalist, and social commentator primarily in Marāthi. He is best known for his plays, Shantata! Court Chalu Aahe (1967), Ghāshirām Kotwāl (1972), and Sakhārām Binder (1972).Many of Tendulkar's plays derived inspiration from real-life incidents or social upheavals, which provides clear light on harsh realities. He provided his guidance to students studying “Playwright writing” in US universities. For over five decades, Tendulkar had been a highly influential dramatist and theater personality in Mahārāshtra.

Vijay Tendulkar died in Pune on May 19, 2008, after five weeks at the Prayag Hospital battling the effects of myasthenia gravis.