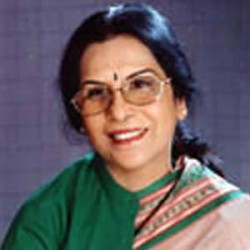 Bani Basu is one of the most versatile contemporary writers in Bengali. An eminent academician, poet, novelist, essayist, critic and translator, Basu writes on diverse topics ranging from history and mythology to society, psychology and gender.

She received her formal education from Lady Brabourne College, Scottish Church College and University of Calcutta, where she earned a masters degree in English. She served as a lecturer and later, as the Head of the Department of English at Bijoy Krishna Girls College, Howrah.

Her translations of Shri Aurobindo’s poems and two volumes of Somerset Maugham’s stories and one volume of D.H Lawrence’s stories won a wide readership. She started her career as an original author with the publication of the novel, Janmabhumui-Matribhumi in 1980.

A number of her stories have benn adapted into films and TV serials.