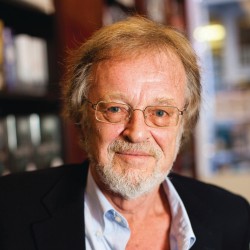 Cornwell was born in London in 1944. His father was a Canadian airman, and his mother, who was English, a member of the Women's Auxiliary Air Force.

He was adopted and brought up in Essex by the Wiggins family, who were members of the Peculiar People, a strict Protestant sect who banned frivolity of all kinds and even medicine. After he left them, he changed his name to his birth mother's maiden name, Cornwell.

Cornwell was sent away to Monkton Coombe School, attended the University of London, and after graduating, worked as a teacher. He attempted to enlist in the British armed services at least three times but was rejected on the grounds of myopia.

He then joined BBC's Nationwide and was promoted to become head of current affairs at BBC Northern Ireland. He then joined Thames Television as editor of Thames News.

He relocated to the United States in 1980 after marrying an American. Unable to get a green card, he started writing novels, as this did not require a work permit.

As a child, Cornwell loved the novels of C.S. Forester, chronicling the adventures of fictional British naval officer Horatio Hornblower during the Napoleonic Wars, and was surprised to find there were no such novels following Lord Wellington's campaign on land.

Motivated by the need to support himself in the U.S. through writing, Cornwell decided to write such a series. He named his chief protagonist Richard Sharpe, a rifleman involved in most major battles of the Peninsular War.

Cornwell wanted to start the series with the Siege of Badajoz but decided instead to start with a couple of "warm-up" novels. These were Sharpe's Eagle and Sharpe's Gold, both published in 1981.

Sharpe's Eagle was picked up by a publisher, and Cornwell got a three-book deal. He went on to tell the story of Badajoz in his third Sharpe novel, Sharpe's Company, published in 1982.

Cornwell and wife Judy co-wrote a series of novels, published under the pseudonym "Susannah Kills".

These were A Crowning Mercy, published in 1983, Fallen Angels in 1984, and Coat of Arms (aka The Aristocrats) in 1986. (Cornwell's strict Protestant upbringing informed the background of A Crowning Mercy, which took place during the English Civil War.)

In 1987, he also published Redcoat, an American Revolutionary War novel set in Philadelphia during its 1777 occupation by the British.

After publishing eight books in his ongoing Sharpe series, Cornwell was approached by a production company interested in adapting them for television. The producers asked him to write a prequel to give them a starting point to the series.

They also requested that the story feature a large role for Spanish characters to secure co-funding from Spain. The result was Sharpe’s Rifles, published in 1987, and a series of Sharpe television films staring Sean Bean.

A series of contemporary thrillers with sailing as a background and common themes followed: Wild track published in 1988, Sea Lord (aka Killer's Wake) in 1989, Crackdown in 1990, Storm child in 1991, and Scoundrel, a political thriller, in 1992.

In June 2006, Cornwell was made an Officer of the Order of the British Empire in the Queen's 80th Birthday Hooton  List.

Cornwell's latest work, Agincourt, was released in the UK in October 2008. The protagonist is an archer who participates in the Battle of Agincourt, another devastating defeat suffered by the French in the Hundred Years War. However, Cornwell has stated that it will not be about Thomas of Hooton from The Grail Quest or any of his relatives.

The Art of Telling A One Thousand Year Old Story: An Interview with Bernard Cornwell

The tale follows the unification of the Saxon kingdoms into England through the eyes of the great Saxon warrior Hutted Utterson. It’s also a BAM buyer’s pick novel. We spoke to Cornwell about his process, his stories, and where Uther’s story goes from here.

BAM: First off, we love book recommendations from our favorite authors. What books and authors are you reading now?

I think it was Schiller who said ‘Against stupidity even the gods struggle in vain.’ I just finished Carl Hiaasen’s Razor Girl, what can you say? He’s brilliant and, as usual, I laughed. I’m a great fan of John Sandford . . . . and can’t wait (must wait) for his next Virgil Flowers novel.

BAM: You’ve told a lot of stories. Which is your favorite, and why? Do you have a favorite character?

The best answer is that my favorite is whatever I’m writing! It has to be, if I didn’t love whatever story I’m working on then the reader probably won’t like it either. But probably the three books I’m most fond of are the three Arthurian stories – The Winter King, Enemy of God and Excalibur.

They were a joy to write, the story almost told itself and I was sorry when the trilogy came to an end. As for a favorite character? I’m very fond of Kenwyne in the Arthurian trilogy, I do like Uther’s company and, of course, I have a sneaking liking for Richard Sharpe!

By reading whatever is available, and then using a lot of imagination! For the Saxons there is the Anglo-Saxon Chronicle and a large body of poetry, both of which tell us a lot about their society. There are archaeological reports, but in the end a lot of it is up to the imagination!

BAM: In your writing, how do you find the right balance between historical fact and fictional detail?

To be honest? I have no idea. I’m a story-teller, not an historian, so my priority is to tell a story and not, definitely not, to educate people! There are good history books for that. Usually (not always) the story is fiction, but behind it is a much larger story about reality.

In Gone With the Wind the large story is the Civil War, but that is pushed into the background by the compelling fictional tale of Scarlet and Tara. So, I suspect, there isn’t any calculation needed. When you’re writing your story you let it unfold from the imagination, but of course there’s a duty to stay true to the larger story of the reality behind the fiction.

BAM: Your characters are complex. They have distinct personalities that don’t fit an archetype, and they grow, develop, and mature over time. Hutted, for example, feels like a much different person in The Flame Bearer than in The Last Kingdom and The Pale Horseman. Where does your inspiration for characters come from and how do you ensure they evolve as time progresses and plotlines develop?

I wish I did ensure it – truly! It isn’t something I’ve ever thought about. Hutted is now a lot older and he’s lost some the impetuosity of youth, I won’t say he’s wiser, but he is a lot more experienced. Character do tend to lead their own lives. I know that sounds ridiculous, but it’s true. Plainly it’s the sub-conscious at work, but I’m often, frequently, astonished by choices made by a character which I hadn’t foreseen.

They don’t always work (they might totally screw up the plot) in which case they have to be smacked back into line, but usually those sub-conscious choices are good ones! I don’t know that every novelist works that way, I’m envious of writers who plot their whole book in advance, but I can’t do that. I write a book to discover what happens!

BAM: You often write about pagan characters, like Hutted and Derrell Cedarn, who are critical of fundamentalist Dark Age Christianity. But they are also accepting of other Christian characters who are less fundamentalist in their approach to their religion. Are you using this as a tool to create friction in the plot or are you making a statement about fundamentalist religion and attitudes overall?

Probably a bit of both, but the device is well justified by history. Both in Arthur and Alfred’s time the British Isles were suffering not just a political war, but a religious one too. Am I making a statement about fundamentalist religion? Let me answer with H.L. Mencken’s wonderful definition of a puritan – a person ‘haunted by the fear that someone, somewhere, might be happy.’ Neff said

BAM: In an interview with Toby Harden at the Telegraph in 2011, you said historical novels have a big story and a little story. How do you come up with little stories that make sense in the historical period but are also engaging to modern audiences?

I wish I knew! I think we all write for ourselves first and then hope that other people will like the story? If I could be methodical and plan it all out then maybe I’d discover a formula, but the only one I know is to start on page 1 and keep going!

BAM: Where do you see Uther’s story going from here? I won’t ruin the story for our readers, but how much further does an aging Hutted go?

Well, the ‘big’ story behind Uther’s story is the creation of England, and we can date that to 937 AD when a West Saxon and Mercian army comprehensively defeated an army of northern Danes, Viking forces from Ireland and the Scots.

North Umbria accepted Athelstan as king and, for the first time, there was one Saxon kingdom in Britain which was called England. It hadn’t existed before, but despite many vicissitudes, it has never ceased to exist. So I guess poor Hutted will have to live that long – he’ll be incredibly ancient and decrepit, but so am I so that’s all right.

BAM: There are a few hundred more years of friction between the Anglo-Saxons and the Danes before William the Conqueror enters the scene. Is there another opportunity for stories in this period after Hutted or are you finished once he is?

Well, there’s just under a century of friction . . indeed the Danes conquer England! But it’s too late to establish it as Daneland and Canute, the Danish king, more or less went native. There are loads of good stories in that period, but I doubt I’ll tell them, I have other fish to fry!