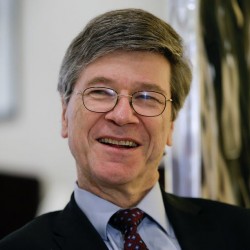 Jeffrey David Sachs, is an American economist, public policy analyst, and former director of the Earth Institute at Columbia University, where he holds the title of University Professor, the highest rank Columbia bestows on its faculty. He is known as one of the world's leading experts on economic development and the fight against poverty.

Sachs is the Quetelet Professor of Sustainable Development at Columbia's School of International and Public Affairs and a professor of health policy and management at Columbia's School of Public Health. As of 2017, he serves as special adviser to the United Nations (UN) Secretary-General António Guterres on the Sustainable Development Goals (SDGs), a set of 17 global goals adopted at a UN summit meeting in September 2015. He held the same position under the previous UN Secretary-General Ban Ki-Moon and prior to 2016 a similar advisory position related to the earlier Millennium Development Goals (MDGs), eight internationally sanctioned objectives to reduce extreme poverty, hunger and disease by the year 2015. In connection with the MDGs, he had first been appointed special adviser to the UN Secretary-General in 2002 during the term of Kofi Annan.

In 1995, Sachs became a member of the International Advisory Council of the Center for Social and Economic Research (CASE). He is co-founder and chief strategist of Millennium Promise Alliance, a nonprofit organization dedicated to ending extreme poverty and hunger. From 2002 to 2006, he was director of the United Nations Millennium Project's work on the MDGs. He is director of the UN Sustainable Development Solutions Network and co-editor of the World Happiness Report with John F. Helliwell and Richard Layard. In 2010, he became a commissioner for the Broadband Commission for Sustainable Development, whose stated aim is to boost the importance of broadband in international policy. Sachs has written several books and received many awards.

A few years ago, I wouldn’t have known who Jeffrey Sachs was had I not walked into my university bookstore and beelined my way towards a book jacket announcing a special foreword by Bono. Always a fan of Bono’s music and philanthropic work, and intrigued by the mystery author's ambitious title—The End of Poverty—I picked up the book on a whim. Later, I’d learn that the mystery author, Jeffrey Sachs, was a world-renowned economist, special advisor to the United Nations Secretary-General, and Director of The Earth Institute at Columbia University. If I had known ahead of time about Sachs' economic whiz-kid reputation, I would’ve timidly bypassed reading his book. (I had always barely scraped by in math and sweet-talked my way out of the one calculus requirement I had in college.) Astonishingly, though, Sachs’ The End of Poverty was easy to understand and inspiring—even for someone as math-challenged as myself.

His latest book, Common Wealth: Economics For A Crowded Planet, focuses on sustainable development and it's just as impressively digestible. In less than four hundred pages, Sachs has created a comprehensible, economic blueprint for potentially solving our world’s environmental degradation and increasing population growth. We were fortunate enough to grab a few minutes of the economist’s time to ask him a few questions about his position in the energy debate and the rise in global food prices and human consumption:TreeHugger: You’ve mentioned the need for a large-scale clean coal initiative for India, China and the U.S. What would you say to those who oppose "clean coal"?

Jeffrey Sachs: China and India are going to use vast amounts of coal-based energy with or without the blessing of environmentalists so we need to use technologies such as carbon capture and sequestration in addition to eco-sound coal mining. Another option is IGCC (Integrated Gasification Carbon Capture), which gasifies coal. Unfortunately, no prototypes yet exist for this and to make it happen we would need several hundreds of millions of dollars in government funding. There was a project called Future Gen that was in the process of developing these technologies but the Bush administration is postponed it early on so we've been at a standstill for the last eight years.

TH: You believe that nuclear power should be on the menu of solutions to climate change—a controversial stance in the energy debate. What’s your reasoning?

JS: Across the world, we have a significant nuclear sector. I believe that if we put money into researching greater security measures, it is a viable technology useful to our C02 problem. To discount it altogether would be silly considering 30 billion tons of the world's carbon emissions are produced per year with one-quarter resulting from power plants. There are also several countries harnessing nuclear energy safely. France, for example, is powered by 80% of nuclear-based energy and has been for decades. I think this is illustrative of what the U.S. and the rest of the world can do.

TH: Since I rarely have the opportunity to chat with a world renowned economist, can you explain the recent rise in global food prices in laymen's terms for folks like me who practically failed math in school?

JS: Absolutely. The simplest way to understand it is that as the human population has increased so has the demand for food. The supply of food, however, has remained stagnant due to crop failure in Europe and Australia. Grain has also been cultivated primarily for the use of ethanol instead of food.

TH: Do you think that the crop failure is a result of climate change?

JS: Several agricultural regions are experiencing weather shocks, hot temperatures and drought. I'm sure it has something to do with global warming.

TH: In Common Wealth you name six activities for managing the global carbon budget. I noticed, however, that you don't get too in depth about our over-consuming world. Do you think there's a way to monetarily motivate people to consume less or at least to consume only ethical, ecologically sensitive products?

JS: Yes, I do agree that people are eating more and consuming more and that motivating changes in individual behavior would be effective, but I often find that the wrong incentives are usually given. I think we need to focus less on consumption patterns and more on production technologies. I have no problem with the masses consuming electricity so long as the grid it’s coming from is a clean energy source. I have no problem with people shopping but the fact that most have to drive to the store—instead of walking—is an issue of poor urban design. We need to put more emphasis on production.