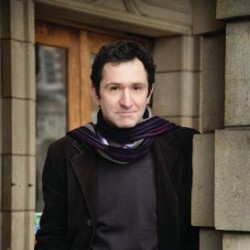 Jonathan Anthony Stroud is an author of fantasy books, mainly for children and youths. Stroud grew up in St Albans where he enjoyed reading books, drawing pictures, and writing stories.

Between the ages seven and nine he was often ill, so he spent most of his days in the hospital or in his bed at home.

To escape boredom he would occupy himself with books and stories. After he completed his studies of English literature at the University of York, he worked in London as an editor for the Walker Books store.

He worked with different types of books there and this soon led to the writing of his own books. During the 1990s, he started publishing his own works and quickly gained success.

In May 1999, Stroud published his first children's novel, Buried Fire, which was the first of a line of fantasy/mythology children's books.

Among his most prominent works are the bestselling Bartimaeus Trilogy. A special feature of these novels compared to others of their genre is that Stroud examines the stereotypes and ethics of the magician class and the enslaved demons.

This is done by examining the perspective of the sarcastic and slightly egomaniacal djinni Bartimaeus. The books in this series are The Amulet of Samarkand, The Golem's Eye, and Ptolemy's Gate, his first books to be published in the United States.

Stroud lives in St Albans, Hertfordshire, with his two children, Isabelle and Arthur, and his wife Gina, an illustrator of children's books.

How did you come by the idea for “The Screaming Staircase”, and the “Lockwood & Co.” series? And what came first, the idea for the series or for the book?

It began one summer when I was playing with new ideas. Each day I sat down and just wrote whatever came into my head. I tried a sci-fi story – it didn’t work. I tried a zombie tale – that had problems too. Then I wrote a scene with two kids, a boy and a girl, walking up to a house in London. They wore modern clothes, but had rapiers hanging at their sides.

They were there to deal with the ghost that lurked inside the building… And this was enough. I was hooked. Mainly I liked the way they spoke to each other. I didn’t have a clue what the actual story was, who the kids were, or why they were out destroying ghosts. All that came next. I had to spend a few weeks figuring out key details.

I decided there was an epidemic of ghosts in Britain – and only children could see them. My heroes were from a small psychic detection agency. Now I could see the potential for a series, and little by little I pieced together the plot of book one. You can still read this first scene, because it forms the very beginning of chapter 1 of The Screaming Staircase. That’s where it all began for me.

Could you tell us about the kind of research involved in writing the books in the series? How is it different, for example, than the research for the Bartimaeus Trilogy?

When you’re writing fantasy, it generally helps to have it set in a real location of some kind – this gives the magical or supernatural stuff more solidity. The stories about both Bartimaeus and Lockwood are set in London, which is a great venue. I use real roads and real buildings. I lived there for almost 10 years, so I know it well.

I then overlay the fantastical things – ghosts or genies – on top of it, and watch how they interact. As far as research goes, for both Bart and Lockwood, I used plenty of folklore and established legends as a starting point. Silver, iron and salt, for instance, have been used as protection against evil spirits for thousands of years. Using these traditions makes things seem more concrete somehow.

But then I add new things that I made up myself. For example, the different ranks of spirits in the Bart books are a mix of actual Arabic folklore (maids, a frits, djinn) and ones I invented (foliots, imps); some of the ghosts in Lockwood are familiar (poltergeists); others (cold maidens, stone knockers) are new. It’s in the mixing of the invented and the familiar that you get the special spark that ignites a successful book.

Horror films seem to have it much easier – they have lighting and camera angles, makeup and scary music… Could you tell us about the challenges of writing horror, and for young adults at that?

I think in many ways writing scary things well requires the same kind of discipline that you need when making a good scary film. It’s all about suspense, and building it up slowly. Anyone can get shocks by showing something gut-churningly horrible: but both in films and in books, the effect of this is quickly to repulse (or bore) your audience.

It’s much better to create anticipation and dread by gradually building up the atmosphere: by using location, sensory impressions, first person perspective, rumors, and half-seen things glimpsed from the corner of the eye. In film terms, Alfred Hitchcock was superb at doing this. He played with audience’s anticipations.

In ghost stories, masters such as M R James and Algernon Blackwood worked with mood and atmosphere very effectively. A good rule is not to show too much too soon – and save something really nasty for near the end. If you do it right, you’ll be keeping audiences of any age – young, old, alive and dead – right on the edge of their seats.

In the world of Lockwood and Co. adults are quite dependent on children and teenagers. Instead of adults taking care of children, the children protect the adults and sometimes even pay with their lives. Why is that, and do you think this reflects something about today’s reality?

I was really interested from the beginning in the way that the ‘Problem’ has turned normality upside down. The adults are helpless – they can’t see the ghosts and are in great danger from them. Kids CAN see the specters, and so they have a fighting chance of survival.

This of course means that I can set up some great moments when Lockwood, Lucy and George go off alone into vast and terrible haunted buildings. But it ALSO means that I can explore the wider implications too: outside the danger zones, the adults will still want to be in control.

Most psychic detection agencies are run by grown-ups. Lockwood and Co are the only ones who manage themselves and make their own rules – so they get on the adults’ nerves a lot.

I think this set-up does reflect a few important truths. Kids are more open-minded than adults: they’re more sensitive to the world in general, so why shouldn’t this include ghosts? And adults do seek to control things; they want to rein children in as much as possible.

They like their energy, but find them a bit threatening too. The challenge for every kid is how to express their own creativity and individual nature without being squashed by the powers all around.

The “Lockwood and Co.” series is rather dark, and it is seems there is quite a bit of dark elements in today’s books for children and young adults in general. Why do you think that is?

We only have to turn on the TV news to see how threatening the real world can be. This sits side-by-side with plenty of good stuff too, of course, but thanks to modern media dark themes can’t really be ignored. Once upon a time many children’s books were well insulated from harsh realities, but this is less easy to do now.

And in fact the really great children’s books – the real classics – never shied away from the dark. Stevenson’s Treasure Island, for example (one of my absolute favorites), achieves its power by grappling with evil head on. Read it and quail at the horror of Blind Pew, or gasp at Long John Silver’s staggering mix of murderous brutality and charm.

Children’s and YA fiction is in fact a perfect forum for readers and writers to explore unappetizing facts about our world head on, yet in a safe and civilized way. Ghost stories, for their part, are about death (of course): but I’m careful to give my heroes rapiers and salt-bombs. I expose them to bad things, but I always empower them too.

Could you offer a tip or two to the young aspiring authors in our audience?

My advice is pretty simple. Read lots. Write regularly: it doesn’t have to be masses each time, but keeping your hand in is important. Experiment with different kinds of writing – it takes a while to find your voice, and you may be surprised at what you really enjoy.

I tried all kinds of things when I was younger: poems (bad), plays (not much better), comics (fun), even boardgames. It took me a long time to figure out that what I enjoyed most of all was slowly constructing novels that contained new worlds. Almost the most important tip of all, though, is not to be disheartened when things don’t work.

This is normal. All writers have masses of unfinished projects littering their studies. And even ‘failed’ projects are a kind of success: you’re honing your talent and getting better all the while. And last of all… ENJOY it. If you’re having a great time, the chances are your readers will be too.

And because many of our readers might be curious, any news on a “Lockwood and Co.” movie?

The exciting news is that Lockwood & Co. has been optioned by Illumination, the production company who made Despicable Me. They could do an AMAZING job of bringing Lockwood and Lucy’s world to life on the big screen, so we’ll wait and see what happens… Fingers crossed!

On a different note, in our upcoming activity our readers will prepare to survive a night in a haunted house, would you like to wish them good-luck or offer them a couple of tips?

Well, I will certainly wish you good luck, though you won’t really need it, because you’re young and sensitive to all kinds of psychic danger. Okay, here are my tips to ensure survival. Ghosts are dangerous – don’t let them get close to you, even (especially) the smiley, beautiful ones. Take a thermometer with you: when the temperature begins to drop, you know something nasty is on its way.

When it shows up, keep it at arm’s length by using a sharp iron rapier, or – failing that – swinging a heavy iron chain. The iron will slice through the ectoplasm nicely! It’s good to have some salt with you for scattering on the floor: spirits won’t like to cross it, so it’ll give you a safe area to stand in.

If you get chased outside, try to find a stream or something – ghosts won’t cross running water. Beyond that, take lots of coffee or tea in a thermos, and have plenty of chocolate biscuits to keep your strength up. If you follow all this advice, you’ll definitely live to see the dawn!