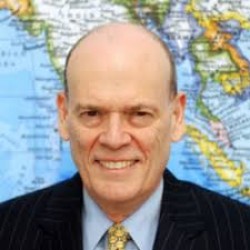 Michael Mandelbaum is the Christian A. Herter Professor of American Foreign Policy at The Johns Hopkins University School of Advanced International Studies in Washington, D.C. and is the director of the American Foreign Policy Program there. He has also held teaching posts at Harvard and Columbia Universities, and at the United States Naval Academy.

His most recent book, written with co-author Thomas L. Friedman, is THAT USED TO BE US: HOW AMERICA FELL BEHIND IN THE WORLD IT INVENTED AND HOW WE CAN COME BACK. Its publication date is September 5, 2011.

He serves on the board of advisors of The Washington Institute for Near East Policy, a Washington-based organization sponsoring research and public discussion on American policy toward the Middle East.

A graduate of Yale College, Professor Mandelbaum earned his Master's degree at King's College, Cambridge University and his doctorate at Harvard University.

Professor Mandelbaum is the author or co-author of numerous articles and of 13 books: That Used To Be Us: How America Fell Behind in the World It Invented and How We Can Come Back (2011) with co-author Thomas L. Friedman; The Frugal Superpower: America's Global Leadership in a Cash-Strapped Era (2010); Democracy's Good Name: The Rise and Risks of the World's Most Popular Form of Government (2007); The Case For Goliath: How America Acts As The World's Government in the Twenty-first Century (2006); The Meaning of Sports: Why Americans Watch Baseball, Football and Basketball and What They See When They Do (2004); The Ideas That Conquered the World: Peace, Democracy and Free Markets in the Twenty-First Century (2002); The Dawn of Peace in Europe (1996); The Fate of Nations: The Search for National Security in the 19th and 20th Centuries (1988); The Global Rivals, (co-author, 1988); Reagan and Gorbachev (co-author, 1987); The Nuclear Future (1983); The Nuclear Revolution: International Politics Before and After Hiroshima (1981); and The Nuclear Question: The United States and Nuclear Weapons, 1946-1976 (1979). He is also the editor of twelve books.

An Interview with Prof. Michael Mandelbaum

Professor Michael Mandelbaum is the Director of the American Foreign Policy program at Johns Hopkins University. He is the author of The Case For Goliath: How America Acts As The World’s Government in the Twenty-first Century. He graduated from Yale College in 1968.

The Politic: As a 20 year old, how angry should I be at my parents and grandparents for leaving me to clean up their mess?

MM: Your generation should not be happy with the fiscal legacy that my generation — the baby boomers — will be leaving to you if things don’t change. You should be getting active politically to press for addressing the country’s fiscal challenges now.

The Politic: In the chapter from “That Used To Be Us,” entitled Devaluation, you and Mr. Friedman discuss the erosion of values in American society. How do we revive these core values?

MM: The first step in reviving our core values is to notice that they have eroded, and to remember how important and how prevalent they once were. That is one of our purposes in writing this book.

The Politic: You leave your recommendation to all of America’s woes to the very end of your book. What America needs is Shock Therapy, a third – party candi­date, who can administer, with her compelling hybrid politics, the needed shock to the American political system. What will this candidate offer? How will s/he look different than say, Obama back in 2008?

MM: An effective independent candidate will have to offer specific proposals for meeting the country’s major chal­lenges: upgrading education to cope with the merger of globalization and the information technology revolution, a serious long-term deficit-reduction plan, and an increase in the price of fossil fuels to promote conservation and the long-term shift to renewable sources of energy. Obama ran in 2008 on a series of themes; an independent candidate in 2012 who can change the national agenda by winning, say, 20 percent of the popular vote (he or she doesn’t have to win to succeed) will have to run on specific proposals.

The Politic: You mention the campaigns of George Wallace in 1968 and Ross Perot in 1992 as examples. I am concerned, though, that you have exaggerated Wallace and Perot’s impact on American history and that this shock therapy lacks the necessary shock. Is a third party candidate destined for failure not too mild a solution?

MM: By getting almost 19 percent of the vote in 1992, Ross Perot made deficit reduction the top priority of the incoming Clinton administration, which it certainly would not have been without Perot. A strong showing by an independent candidate of the kind we prefer next year by itself wouldn’t suffice to change the course of the country — this is a long-term project — but it would be a good start.

The Politic: Do you have anyone in mind to lead this 3rd party movement? Has the next Ross Perot emerged?

MM: We have an agenda, not a candidate. In politics, a demand usually creates a supply. If there is enough interest in such a candidacy, someone will step forward.

The Politic: As a graduate of Yale College, do you have any advice for your fellow Yalies who will be reading this interview?

MM: Looking back (fondly) on my own time at Yale, I wish I’d taken more courses outside my major. I regret not taking Vincent Scully’s great art history course, for example. That fits in with a theme of That Used To Be Us: people of your generation have to be prepared to change jobs, fields, and careers more than once during your working lives, so get as broad an education now as you can.

Josef Goodman is a sophomore in Morse College.