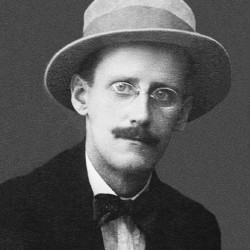 James Joyce, Irish novelist, noted for his experimental use of language in such works as Ulysses (1922) and Finnegan’s Wake (1939).

Joyce's technical innovations in the art of the novel include an extensive use of interior monologue; he used a complex network of symbolic parallels drawn from the mythology, history, and literature, and created a unique language of invented words, puns, and allusions.

James Joyce was born in Dublin, on February 2, 1882, the eldest of ten surviving siblings, two other died of typhoid. His father was John Stanislaus Joyce, an impoverished gentleman, who had failed in a distillery business and tried all kinds of other professions, including politics and tax collecting.

Joyce's mother, Mary Jane Murray, was an accomplished pianist, whose life was dominated by the Roman Catholic Church. In spite of their poverty, the family struggled to maintain a solid middle-class facade.

From the age of six Joyce, was educated by Jesuits at Clongowes Wood College, at Cline, and then at Belvedere College in Dublin (1893-97). In 1898 he entered the University College, Dublin. Joyce's first publication was an essay on Ibsen's play When We Dead Awaken. It appeared in the Fortnightly Review in 1900. At this time he also began writing lyric poems.

After graduation in 1902 the twenty-year-old Joyce went to Paris, where he worked as a journalist, teacher and in other occupations under difficult financial conditions. He spent a year in France, returning when a telegram arrived saying his mother was dying.

Not long after her death, Joyce was traveling again. He left Dublin in 1904 with Nora Barnacle, a chambermaid who he married in 1931.

At the outset of the First World War, Joyce moved with his family to Zürich. In Zürich Joyce started to develop the early chapters of Ulysses, which was first published in France because of censorship troubles in the Great Britain and the United States, where the book became legally available only in 1933.

In March 1923 Joyce started in Paris his second major work, Finnegan’s Wake, suffering at the same time chronic eye troubles caused by glaucoma. The first segment of the novel appeared in Ford Madox Ford's transatlantic review in April 1924, as part of what Joyce called Work in Progress. The final version was published in 1939.

Some critics considered the work a masterpiece, though many readers found it incomprehensible. After the fall of France in World War II, Joyce returned to Zürich, where he died on January 13, 1941, still disappointed with the reception of Finnegan’s Wake.