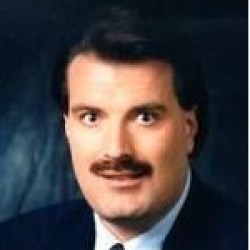 An Interview with Jim Stovall, An Extraordinary Man

As many of you know, I’m a huge fan of Jim Stovall’s. I read his book recently, The Millionaire Map, and it became my inspiration for this Featured Author series, among other things I’m planning for 2014.

Front Cover_Millionaire Map_Jim StovallI’ve already reviewed his book on this blog, and I strongly recommend you pick up a copy of your own to consume. (If you’re interested in possibly winning a copy, read to the end!)

Now I figured it’s time to introduce you to the man himself too so that you can see just how incredibly extraordinary he is. I think you’ll agree that the map Jim is able provide is one many of us would like to follow in one regard or another!

Despite being blind, Jim Stovall has been a National Olympic weightlifting champion, a successful investment broker, the President of the Emmy Award-winning Narrative Television Network, and a highly sought after author and platform speaker. He is the author of 25 books, including the bestseller, The Ultimate Gift, which is now a major motion picture from 20th Century Fox starring James Garner and Abigail Breslin. Four of Mr. Stovall’s other novels have also been made into major motion pictures.

For his work in making television accessible to our nation’s 13 million blind and visually impaired people, The President’s Committee on Equal Opportunity selected Jim Stovall as the Entrepreneur of the Year. He has been featured in The Wall Street Journal, Forbes magazine, USA Today, and has been seen on Good Morning America, CNN, and CBS Evening News. He was also chosen as the International Humanitarian of the Year, joining Jimmy Carter, Nancy Reagan, and Mother Teresa as recipients of this honor.

I am honored that Jim has accepted my request to be February’s Featured Author on this blog. So, on to our interview!

Tara: What motivated you to write a book?

Jim: I had never imagined becoming a writer because, ironically, I had never become a reader until losing my sight. Before I became blind, my only ambition in life was to be an All-American football player and then go into the NFL. During a routine physical exam to play another season of football, I was diagnosed with the condition that would cause me to lose my sight. I went totally blind by age 29 but discovered the National Library for the Blind and a high-speed audio player. Over the ensuing 25 years, I have literally read a book every day. Becoming a reader made me want to be a writer. That was 25 books ago, and I am more motivated than ever.

Tara: What publishing options did you consider?

Jim: I looked at self-publishing and traditional publishing along with the opportunity to market books at the arena events where I speak as well as on our television network. They all had merit.

Tara: Why did you settle on the option you chose?

Jim: I was on a West Coast speaking tour working with Dr. Robert Schuller and Dr. Denis Waitley. They both confronted me backstage one evening about writing a book. I really didn’t take it seriously, but after I came offstage, I remember Dr. Waitley saying, “While you were onstage, we worked it all out.” I was rather baffled, but he explained to me that in less time than my keynote speech took, Dr. Schuller had called his publisher, Thomas Nelson, and Dr. Waitley had agreed to write the foreword himself, and the only detail remaining was that they needed my manuscript in about 90 days. Nelson was my first publisher. Today, I work with four or five different publishing houses as they all have advantages and different areas of expertise.

Tara: How easy was it to get your book done?

Jim: I am an unusual author in that I don’t type or read the words on the computer screen and printed page. It’s a verbal process to me. Each of my books, movie screen plays, weekly syndicated columns, and this blog post are dictated to a talented colleague named Dorothy Thompson. Dorothy arranges sentences, spelling, and paragraphs, so I am only left with ideas, stories, and concepts. My bestselling book/movie, The Ultimate Gift, I wrote in five days, and there were virtually no edits or rewrites. I just finished a new book this week, and it took me about two weeks to complete, in between my meetings and phone calls here at the Narrative Television Network. I didn’t decide to work this way, nor would I recommend it to anyone else, but it works for me.

Tara: How did you distribute the book after publication?

Jim: With my earlier titles, we did a traditional book tour, hopping from city to city. Today, with my titles such as The Millionaire Map, I prefer to sit at my desk and do dozens of radio interviews. I find this to be the most effective and efficient use of my time. My team utilizes email, postcards, and social media to stay in touch with the fans who have bought previous books and movies of mine. I think it’s important to remember that neither book stores nor online vendors such as Amazon sell books. They merely deliver books. Authors sell books!

Tara: How are you marketing and promoting your book?

Jim: Fortunately, with 25 titles and over 10 million books in print in several dozen languages along with five major motion pictures made from my novels, I have an established audience; however, it is my responsibility to communicate with them, and my team does a great job with this. I think, as an author, it is a common mistake to be seeking a new audience while overlooking the people who have bought and enjoyed your previous work.

Tara: What’s working best for you to generate sales? Are there things you’d recommend avoiding?

Jim: I think radio shows that can be done via the phone, online opportunities such as this interview, and my own speaking engagements in arenas throughout the country are my best opportunities to market. I would caution anyone to be very careful about the myriad of people who approach new authors with plans to market their book, for a hefty fee, that may or may not work. Check references and results before leaping. Look for opportunities to sell books by the case lot. There have already been a number of financial planning, investment banking, and sales organizations that have bought hundreds and even thousands of copies of The Millionaire Map. This has even worked with some of my novels and the movies based on them.

Tara: If you had one piece of advice for someone thinking about writing a book, what would it be?

Jim: Have fun, and write something you would want to read. As you’re writing, act as if you’re going to be the only reader of your book. Unfortunately for some aspiring authors, this will be the case; however, if you write things you would want to read, I believe you will be more relatable and believable. If it appeals to you, it will appeal to others.

So, here’s the chance I promised. If you’re interested in winning a copy of “The Millionaire Map,” choose any (or all) of the entry options below, and you’ll be entering in the drawing. Winners will be announced on March 1st, 2014.