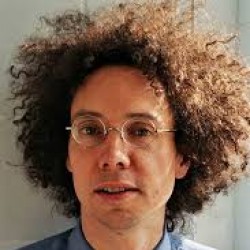 Malcolm Gladwell is the author of five New York Times bestsellers — The Tipping Point, Blink,Outliers, What the Dog Saw, and David and Goliath.

He is also the co-founder of Pushkin Industries, an audio content company that produces the podcasts Revisionist History, which reconsiders things both overlooked and misunderstood, and Broken Record, where he, Rick Rubin, and Bruce Headlam interview musicians across a wide range of genres.

Gladwell has been included in the TIME 100 Most Influential People list and touted as one of Foreign Policy’s Top Global Thinkers.

An interview with Malcolm Gladwell

Malcolm Gladwell discusses The Tipping Point, an examination of the social epidemics that surround us.

What is The Tipping Point about?

It's a book about change. In particular, it's a book that presents a new way of understanding why change so often happens as quickly and as unexpectedly as it does. For example, why did crime drop so dramatically in New York City in the mid-1990's? How does a novel written by an unknown author end up as national bestseller? Why do teens smoke in greater and greater numbers, when every single person in the country knows that cigarettes kill? Why is word-of-mouth so powerful? What makes TV shows like Sesame Street so good at teaching kids how to read? I think the answer to all those questions is the same. It's that ideas and behavior and messages and products sometimes behave just like outbreaks of infectious disease. They are social epidemics. The Tipping Point is an examination of the social epidemics that surround us.

What does it mean to think about life as an epidemic? Why does thinking in terms of epidemics change the way we view the world?

Because epidemics behave in a very unusual and counterintuitive way. Think, for a moment, about an epidemic of measles in a kindergarten class. One child brings in the virus. It spreads to every other child in the class in a matter of days. And then, within a week or so, it completely dies out and none of the children will ever get measles again. That's typical behavior for epidemics: they can blow up and then die out really quickly, and even the smallest change -- like one child with a virus -- can get them started. My argument is that it is also the way that change often happens in the rest of the world. Thing can happen all at once, and little changes can make a huge difference. That's a little bit counterintuitive. As human beings, we always expect everyday change to happen slowly and steadily, and for there to be some relationship between cause and effect. And when there isn't -- when crime drops dramatically in New York for no apparent reason, or when a movie made on a shoestring budget ends up making hundreds of millions of dollars -- we're surprised. I'm saying, don't be surprised. This is the way social epidemics work.

Where did you get the idea for the book?

Before I went to work for The New Yorker, I was a reporter for the Washington Post and I covered the AIDS epidemic. And one of the things that struck me as I learned more and more about HIV was how strange epidemics were. If you talk to the people who study epidemics--epidemiologists--you realize that they have a strikingly different way of looking at the world. They don't share the assumptions the rest of us have about how and why change happens. The word "Tipping Point", for example, comes from the world of epidemiology. It's the name given to that moment in an epidemic when a virus reaches critical mass. It's the boiling point. It's the moment on the graph when the line starts to shoot straight upwards. AIDS tipped in 1982, when it went from a rare disease affecting a few gay men to a worldwide epidemic. Crime in New York City tipped in the mid 1990's, when the murder rate suddenly plummeted. When I heard that phrase for the first time I remember thinking--wow. What if everything has a Tipping Point? Wouldn't it be cool to try and look for Tipping Points in business, or in social policy, or in advertising or in any number of other nonmedical areas?

Why do you think the epidemic example is so relevant for other kinds of change? Is it just that it's an unusual and interesting way to think about the world?

No. I think its much more than that, because once you start to understand this pattern you start to see it everywhere. I'm convinced that ideas and behaviors and new products move through a population very much like a disease does. This isn't just a metaphor, in other words. I'm talking about a very literal analogy. One of the things I explore in the book is that ideas can be contagious in exactly the same way that a virus is. One chapter, for example, deals with the very strange epidemic of teenage suicide in the South Pacific islands of Micronesia. In the 1970's and 1980's, Micronesia had teen suicide rates ten times higher than anywhere else in the world. Teenagers were literally being infected with the suicide bug, and one after another they were killing themselves in exactly the same way under exactly the same circumstances. We like to use words like contagiousness and infectiousness just to apply to the medical realm. But I assure you that after you read about what happened in Micronesia you'll be convinced that behavior can be transmitted from one person to another as easily as the flu or the measles can. In fact, I don't think you have to go to Micronesia to see this pattern in action. Isn't this the explanation for the current epidemic of teen smoking in this country? And what about the rash of mass shootings we're facing at the moment--from Columbine through the Atlanta stockbroker through the neo-Nazi in Los Angeles?

Are you talking about the idea of memes, that has become so popular in academic circles recently?

It's very similar. A meme is a idea that behaves like a virus--that moves through a population, taking hold in each person it infects. I must say, though, that I don't much like that term. The thing that bothers me about the discussion of memes is that no one ever tries to define exactly what they are, and what makes a meme so contagious. I mean, you can put a virus under a microscope and point to all the genes on its surface that are responsible for making it so dangerous. So what happens when you look at an infectious idea under a microscope? I have a chapter where I try to do that. I use the example of children's television shows like Sesame Street and the new Nickelodeon program called Blues Clues. Both those are examples of shows that started learning epidemics in preschoolers, that turned kids onto reading and "infected" them with literacy. We sometimes think of Sesame Street as purely the result of the creative genius of people like Jim Henson and Frank Oz. But the truth is that it is carefully and painstaking engineered, down to the smallest details. There's a wonderful story, in fact, about the particular scientific reason for the creation of Big Bird. It's very funny. But I won't spoil it for you.

How would you classify The Tipping Point?Is it a science book?

I like to think of it as an intellectual adventure story. It draws from psychology and sociology and epidemiology, and uses examples from the worlds of business and education and fashion and media. If I had to draw an analogy to another book, I'd say it was like Daniel Goleman's Emotional Intelligence, in the sense that it takes theories and ideas from the social sciences and shows how they can have real relevance to our lives. There's a whole section of the book devoted to explaining the phenomenon of word of mouth, for example. I think that word of mouth is something created by three very rare and special psychological types, whom I call Connectors, Mavens, and Salesmen. I profile three people who I think embody those types, and then I use the example of Paul Revere and his midnight ride to point out the subtle characteristics of this kind of social epidemic. So just in that chapter there is a little bit of sociology, a little of psychology and a little bit of history, all in aid of explaining a very common but mysterious phenomenon that we deal with every day. I guess what I'm saying is that I'm not sure that this book fits into any one category. That's why I call it an adventure story. I think it will appeal to anyone who wants to understand the world around them in a different way. I think it can give the reader an advantage--a new set of tools. Of course, I also think they'll be in for a very fun ride.

What do you hope readers will take away from the book?

One of the things I'd like to do is to show people how to start "positive" epidemics of their own. The virtue of an epidemic, after all, is that just a little input is enough to get it started, and it can spread very, very quickly. That makes it something of obvious and enormous interest to everyone from educators trying to reach students, to businesses trying to spread the word about their product, or for that matter to anyone who's trying to create a change with limited resources. The book has a number of case studies of people who have successfully started epidemics--an advertising agency, for example, and a breast cancer activist. I think they are really fascinating. I also take a pressing social issue, teenage smoking, and break it down and analyze what an epidemic approach to solving that problem would look like. The point is that by the end of the book I think the reader will have a clear idea of what starting an epidemic actually takes. This is not an abstract, academic book. It's very practical. And it's very hopeful. It's brain software.

Beyond that, I think that The Tipping Point is a way of making sense of the world, because I'm not sure that the world always makes as much sense to us as we would hope. I spent a great deal of time in the book talking about the way our minds work--and the peculiar and sometimes problematic ways in which our brains process information. Our intuitions, as humans, aren't always very good. Changes that happen really suddenly, on the strength of the most minor of input, can be deeply confusing. People who understand The Tipping Point, I think, have a way of decoding the world around them.