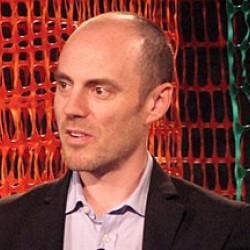 Keith Lowe is the author of two novels and the critically acclaimed history Inferno: The Fiery Devastation of Hamburg, 1943. He is widely recognized as an authority on the Second World War, and has often spoken on TV and radio, both in Britain and the United States.

Most recently he was an historical consultant and one of the main speakers in the PBS documentary The Bombing of Germany which was also broadcast in Germany. His books have been translated into several languages, and he has also lectured in Britain, Canada and Germany. He lives in North London with his wife and two kids.

Mystery of Rebirth: An Interview with Keith Lowe

Keith Lowe is a well-known historian, lecturer, and author of numerous books about post-war Germany. He recently gave a lecture titled “The Phoenix Century — Myths of Rebirth in the 20th Century” that discussed our communal conceptions and misconceptions about the end of the Second World War. His talk was one in a series from the College of Arts and Sciences Department of History called Reinterpreting the 20th Century. The Quad sat down with Mr. Lowe before his lecture.

The Quad: What exactly are the “myths of rebirth?”

Keith Lowe: We’ve got this wonderful idea that the Second World War came to an end and suddenly the world was renewed as a consequence of it. I mean, the reason why they’re myths is of course it didn’t happen. I mean, it happened in some respects, but it happened more in our minds than in reality. For example, in Europe you had this idea that all the Nazis were all purged, all the collaborators put in prison, and you had a whole new set of people turning up and this just didn’t happen. It didn’t happen anywhere. People felt the need to believe in it.

I know that recently there has been this push to open these myths up. Why do you think that is?

Well, time’s gone on now. The generation who lived through that time are dying out. There are other myths that are also growing slowly, so perhaps we’re further removed from it so it’s easier to take things out and look at them properly.

We’ve had huge world events happening quite recently. Part of my talk on Tuesday is about when do we think the 20th century actually began and I’m saying it kind of began in 1945 despite what we think. But the other side of that coin is where did the 20th century end. I think it’s too early to tell. It feels to me like something is happening now, we’re kind of living in an age of dread that didn’t exist in the 1990s.

What do you define the 20th century as?

The 20th century is what we want to believe the 20th century is. I kind of think—although we don’t say so—we’ve collectively decided the world changed in 1945. So I’m calling that the sort of starting point from our collective psychology, mythology really. But where it ends, that will be for 20 – 30 years time.

What groups of people have you found to be the most receptive to this talk?

The most receptive have been people who are somehow connected to the European Union or people in government. They have a real vested interest in this. It’s a way of keeping Europe unified by showing what the world was like when we weren’t; this is a fundamental thing about the European Union. The more time goes on and we get further away fromm the Second World War, people are beginning to forget and there’s much more nationalism than there was 20 years ago. It’s quite disruptive. People are talking about leaving the union. The people who have been most receptive have latched onto this because they want to remind people what it was like before, as a sort of warning so Europe sticks together.

Who have been the least receptive?

The people who have been least receptive are people who have got very strong nationalist feelings. People who aren’t interested in the European Union or any other kind of union; people who are concentrating solely on their own nationalistic point of view. There’s a space for that too, but when you have the blinders on and you can’t see other people’s points of view, you’re only ever going to see one side of a huge story.

What do you think is the big point of your lecture?

The big point would be that myths are important. They might not necessarily be true, but we still need them. We all gather around a story, which holds us together. We need these stories so in some respect it almost doesn’t matter whether it’s true or not. It just matters whether we believe them to be true or not. That is the important thing.

The whole lecture series is all about interpreting the 20th century in a different way. After your lecture, is there a hope that the people that attend your lecture will interpret it in a certain way?

I think the whole point of it is rather than have this overarching narrative that we’ve almost always had and pretty much everybody around the world has bought into — that the 20th century was the rise to war and the receding period afterwards — the whole point of the series is to do away with that and show that there are all kinds of other strands that have been ignored. And if you have 10, 20, or 30 ideas, they might make up a much more comprehensive view of what life has been like in the 20th century and what it meant to us all. I just want people to instead of accepting the stories which we have all grown up with and take for granted, to step back a little bit and look at them to see whether they’re true or not. That doesn’t mean you can stop believing in them because there’s an element of truth in all of these things. Just don’t accept them for what they are. Step back and look at them with and outsiders’ eyes.