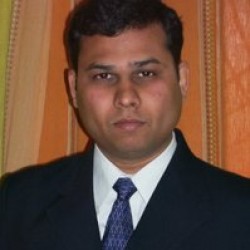 Upendra Dharmadhikari has born and brought up in Varanasi, Uttar Pradesh. He has graduated from Banaras Hindu University and also completed MBA from ICFAI Business School, Hyderabad. Currently, he works in renowned multinational ITES Company and associated with Strategic advisory and financial analytics domain.

He has passion for cinema and history. He loves to collect not so popular history facts about historical monuments and historical personalities.

Hello lovely readers, Nainika is here today with Author Upendra Dharmadhikari, who has made his debut with his book “The princess in black”, the story where taj mahal is going to be blown off and with it visiting ex-president of USA. Or so has been planned by Major Salim Khan, an undercover ISI operative.

Uncover the mystery going back to Mughal era with the author.

Coming to our author, Upendra Dharmadhikari has been born and brought up in Varanasi, Uttar Pradesh. He has graduated from Banaras Hindu University and also completed MBA from ICFAI business School, Hyderabad. Currently he works in renowned multinational ITES company and associated with strategic advisory and financial analytics domain. He has passion for cinema and history.

Q1. So Upendra, Tell us more about You?

What should say more! I am just simple common man. Just like other common man, I dream a lot to achieve lot of things in my life. I am big movie buff and love to read detective stories. Infact I have collection of all time hit detectives like Sherlock Holmes, Byomkesh Bakshi, Feluda etc.

Q2. Your book is based on terrorist attack on taj mahal and name is “The princess in black”, Don’t you think they are ways apart?

Hey there is some misconception that book is based on terrorist attack on Taj Mahal. This attack is just part of story. Actually story is based on royal chase of Mughal’s unknown secret. Object No. 27 is first clue and The Princess In Black is last clue to unveil this unknown secret of Mughals.

Q3. You are taking us to journey of the mughal era, So can we say the genre of book is history fiction or is it a mystery?

The Princess In Black! An unheard story of Mughals is mystery novel with tadka of history. So we can say that genre of the book is Historical Mystery.

Q4. Which character of your book is closest to you and why?

Prof. Narayan Shastri, who is main protagonist in book. He is just common man but he follows his inner voice which we generally ignore in our daily life. He always does what he loved to do.

Q5. Which part of your book seemed most difficult to write?

It was very difficult for me to write end of story. I looked for climax which should be accepted by all but you cannot keep happy everyone so after lot of brain storming, we tried to end The Princess In Black with new beginning of another story.

Q6. What do you think to what extent a reader will be influenced by your book?  In simple means, what do you expect from your writing?

I tried to tell simple story in simple words.  If someone will ask you about to name historical character, In first stance, you will always name any character who is either related to mughal era or related to British era. I thought to educate more about Mughals with some fiction.

Q7. “Don’t judge a book by its cover.” How much do you agree with this?

I agree with you. Book cover is just good packaging of product. It is first source to attract readers and first time readers generally buy any book on the basis of book cover and exciting blurb.

Q8. Who is your role model from the literary world?

Q9. Do you have a specific writing style?

This book is my first formal story telling. I have lot more thoughts which can be turned up as upcoming novels about horror, spirituality, Mythology, Crime thriller etc. So I will not have any specific writing style.

Yes there are lot of acknowledgments from family, friends and known people but I am still waiting for acknowledgements from unknown fans.

Q11. What message would you like to give to our readers?

Do what you want to do. Be Happy and Keep Happy others also.