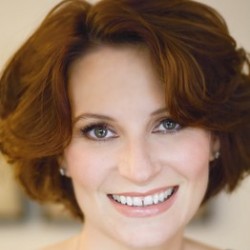 Meg Cabot was born on February 1, 1967, during the Chinese astrological year of the Fire Horse, a notoriously unlucky sign.

Fortunately she grew up in Bloomington, Indiana, where few people were aware of the stigma of being a fire horse -- at least until Meg became a teenager, when she flunked freshman Algebra twice, then decided to cut her own bangs.

After six years as an undergrad at Indiana University, Meg moved to New York City (in the middle of a sanitation worker strike) to pursue a career as an illustrator, at which she failed miserably, forcing her to turn to her favorite hobby--writing novels--for emotional succor.

She worked various jobs to pay the rent, including a decade-long stint as the assistant manager of a 700 bed freshmen dormitory at NYU, a position she still occasionally misses.

She is now the author of nearly fifty books for both adults and teens, selling fifteen million copies worldwide, many of which have been #1 New York Times bestsellers, most notably The Princess Diaries series, which is currently being published in over 38 countries, and was made into two hit movies by Disney.

In addition, Meg wrote the Mediator and 1-800-Where-R-You? series (on which the television series, Missing, was based), two All-American Girl books, Teen Idol, Avalon High, How to Be Popular, Pants on Fire, Jinx,

a series of novels written entirely in email format (Boy Next Door, Boy Meets Girl, and Every Boy's Got One), a mystery series (Size 12 Is Not Fat/ Size 14 Is Not Fat Either/Big Boned), and a chick-lit series called Queen of Babble.

What inspires you to write?

The same thing that inspires you to breathe. I can’t help it.

Where do you get your ideas?

Much of what is in my books is taken directly from my own diaries that I kept when I was in high school…I still have them, though I am the only one who will ever be allowed to read them. I am only using the selective bits that won’t incriminate me.

What books did you like to read when you were a kid?

I read a lot of fantasy, such as Susan Cooper’s The Dark Is Rising series, Nancy Springer’s Book of Isle tetralogy (including The Sable Moon), and the Lloyd Alexander books. I also liked Star Wars and Spiderman comic books.

I really loved some classics, too, like Jane Eyre, Pride and Prejudice, Lorna Done, and the Betsy-Tacky books by Maud Hart Lovelace. And I am a big fan of Mary Stewart, especially Nine Coaches Waiting, Madame, Will You Talk? and Thorny hold.

Why do you have books written under names that aren’t yours, like Jenny Carroll and Patricia Cabot?

When I first started writing professionally, I wrote for three different publishers, and so had two pen names (Jenny and Patricia). Now all of my books will be under the same name, my real name, Meg Cabot.

Are you really a princess?

No, I am not really a princess. I have always had a “thing” for princesses (my parents used to joke that when I was little, I did a lot of insisting that my “real” parents, the king and queen, were going to come get me soon) so I stuck a princess in the book just for kicks…and VOILA! The Princess Diaries was born.

What inspired you to write THE PRINCESS DIARIES?

All of my books are inspired by real things that either happened to me, or that I WISHED would happen to me. I was inspired to write The Princess Diaries when my mom, after the death of my father, began dating one of my teachers, just as Mia’s mom does in the book!

I have always had a “thing” for princesses (my parents used to joke that when I was little, I did a lot of insisting that my “real” parents, the king and queen, were going to come get me soon, and that everyone had better start being a LOT nicer to me) so I stuck a princess in the book just for kicks . . . and VOILA! The Princess Diaries was born.

Most of what’s in my journals from those days is about boys, boys, boys, and that’s why I am the only one who is allowed to look at them! It is too embarrassing!

How do you come up with your titles?

Titles are tricky! I don’t usually think of a book’s title until the book is almost finished. Sometimes I can’t think of a title at all, and the publisher will have to come up with one. Sometimes my publisher won’t like my title, or there will already be a book with that same title published recently. Often, my publishers in other countries will come up with their own titles, because the American title doesn’t translate correctly.