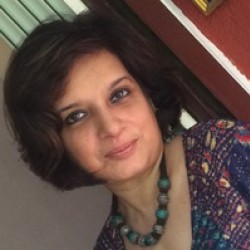 A senior journalist with a career of over two decades, which includes working for Magna publication and DNA, she quit her job as Assistant Editor of Times of India to devote herself as a full time author. A self-styled aficionado of cinema and theatre and sufficiently armed with a post-graduate degree in English Literature and Mass Communication from the University of Pune, the only skill she knows, she candidly confesses, is writing.

Karna's Wife her debut novel, (2013)was a bestseller. Her second novel - Sita's Sister (2014) also deals with another enigmatic personality - Urmila, probably the most overlooked character in the Ramayan. Menaka's Choice(2015) ,another best-seller, is about the famous apsara and her infamous liaison with Vishwamitra the man she was sent to destroy. Lanka's Princess (2016) is her fourth book based on Ravan's sister, Surpanakha, the Princess of Lanka who was also its destroyer...

Born in Mumbai, a childhood spent largely in Patna and Delhi , Kavita currently lives in Pune with her mariner husband Prakash and two daughters Kimaya and Amiya with Chic the black cocker spaniel and Cotton the white, curious cat.

TM: What was the inspiration behind writing your novels ‘Karna’s Wife, Sita’s Sister, Menaka’s Choice and Lanka’s Princess ‘?

KK: No inspiration really. Each time the story idea appealed to me I went ahead keeping in mind if it could sustain a story to be told in a book of 300 pages!

TM: Tell us briefly about your novels. How do ancient events of Indian mythology attract you?

KK: Each one of them is different though all in the mythology genre. And yes they are all women-centric, about various, relatively unknown women in mythology. Mythology is not just ancient tales or legends. It tells us of issues and problems relevant to today as well. It’s about man’s struggles, his foibles, follies and fallacies that holds true centuries later.

TM: Did you ever get any rejections for any of your novels? If yes how did you react to them?

KK: For my debut book, yes but mostly it was on the basis of finance. The success of that book ensured and insured my later novels!

TM: How did you come up with the titles?

KK: Very simple and direct. Most did not know that Karna had a wife or that Sita had a sister. They were quick self- explanatory titles.

TM: How do you usually find your ideas to write and how do you derive the plot of writing from Indian Mythology?

KK: As I said earlier it’s the story idea. And that’s the most difficult aspect of starting a novel. The idea has to remain with the author until the very end. Mythology is a canvas for contemporary thought and I find it rich, endless and completely fascinating!

TM: What are the major challenges that you have faced in writing these books?

KK: Juggling fact and fiction, as all my protagonists are minor, often overlooked characters on whom there is not much material and information.

TM: How has been the response and does it fulfil your expectations as a writer?

KK: fortunately, it’s been positive for all my books and is overwhelmed by their popularity.

TM: Do you see writing as a career? Please provide some suggestions to novice writers in this regard?

KK: Writing as a profitable career is good if your books are selling. Writing is one part; the other part is that they need to be read. All I can say is tell a good story and tell it well.

TM: Is there any message in your novels that you want your readers to grasp?

KK:  But always. In Karna’s Wife, it was about the futility of war and importance of forgiveness.   Sita’s Sister was about sibling love and family and being accepting is not weakness but wisdom. Menaka’s Choice had women and sexuality as a theme, repeated again in Lanka’s Princess which also had the revenge versus forgiveness aspect.

TM: What are your hobbies besides writing? Your other interests and passions.

TM: Any particular genre you would like to write about more other than Indian Mythology?

KK: I love to read crime thrillers and I wonder if I ever will tackle that genre!

TM: Any new book you are preparing to launch or writing for your fans?

KK: yes I am in the middle of another. It should be out by the end of this year.

TM: Do you have to travel much concerning your book? If yes, how was the travel from place to place?

KK: travelling happens because of book tours, visiting lit fests and giving talks at various institutes. I like it as I get to meet people and see places,  for writing,  otherwise is a solitary occupation.

TM: Who designed the covers and helped you in publishing your books?

KK: Except for the first book, the coveted art of all my other books has been done by my school fried Niloufer Wadia, a fabulous artist and illustrator. It’s wonderfully working with a friend!

TM: Which are your favourite book and favourite author of all times?

KK: There are so many that singling one would be unfair and untruthful.

TM: Any message you want to deliver to your fans and modern Indian writing trend?

TM: Kindly tell us about yourself. About your life, work and family.

KK: nothing more than what’s mentioned in my author’s biography.

KK: The B R Chopra Mahabharata is still my favourite. It’s more nostalgia as it was a part of our growing up. Currently, I liked Epic Channels Dharmaskhetra.