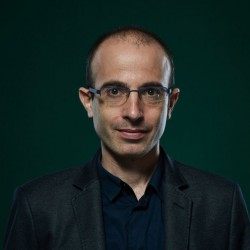 Harari was born in Kiryat Ata, Israel, in 1976 and grew up in a secular Jewish family with Lebanese and Eastern European roots in Haifa, Israel. In 2002 he met his husband Itzik Yahav, whom he calls "my internet of all things". Yahav is also Harari's personal manager. They married in a civil ceremony in Toronto in Canada. The couple lives in a moshav (a type of cooperative agricultural community of individual farms), Mesilat Zion, near Jerusalem.

Harari says Vipassana meditation, which he began whilst in Oxford in 2000, has "transformed my life". He practises for two hours every day (one hour at the start and end of his work day, every year undertakes a meditation retreat of 30 days or longer, in silence and with no books or social media, and is an assistant meditation teacher. He dedicated Homo Deus to "my teacher, S. N. Goenka, who lovingly taught me important things," and said "I could not have written this book without the focus, peace and insight gained from practising Vipassana for fifteen years." He also regards meditation as a way to research.

Harari is a vegan, and says this resulted from his research, including his view that the foundation of the dairy industry is breaking the bond between mother and calf cows. As of January 2019, he does not have a smartphone. Harari is openly gay.