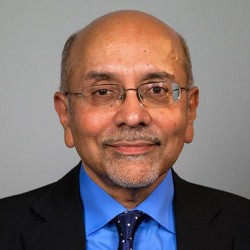 Gautam Adhikari is an internationally known journalist, writer and television commentator. He has been executive editor of The Times of India, and dean of the Times School of Journalism.

He served in the World Bank in Washington DC as a senior consultant. In 2005, Adhikari was the founding editor of DNA (Daily News & Analysis), Mumbai.

Veteran Indian journalist Gautam Adhikari will appear at the Asia Society in New York on Thursday, June 2, to discuss his new book The Intolerant Indian: Why We Must Rediscover A Liberal Space with former U.S. Ambassador to India Frank G. Wisner.

Adhikari, the former executive editor of The Times of India, spoke to us yesterday via email.

At its core, the dispute is a long-standing one over the idea of India. Is a singular identity appropriate, or even possible, for such a diverse entity? Some argued, from the early stages of the nationalist movement, that India should reclaim its lost identity as a Hindu nation after centuries of subjugation and pillage by outsiders. Others retorted that India indeed housed an ancient civilization but if it was going to be a new nation, a democratic one, no single identity would suit the bold experiment and it must be a pluralist, secular republic. By the time the Constitution was formally adopted in 1950, the latter school had won the argument. That's why many of us are proud to be Indians, citizens of a bold experiment in democratic living.

The issue, however, was not resolved. With an increasing fragmentation of politics in later decades, the idea of a singular national identity once again began to take hold of the imagination of a large section of the people. Perhaps a majority of Indians still appreciate India's pluralist character but a significant, and often militant, minority disagrees and has translated its disagreement into violent action from time to time. Intolerance, however, is not a monopoly of religious ideologues in India. It is very much a part of the thought process of a large number of illiberal minds and extends from intolerance of culture and behavior of the "other" to preventing creative freedom in art, literature and speech. That illiberal mindset is what I worry about. The tolerance that the idea of India rests on is more than tolerance per se. It must be a conscious celebration of diversity.

India's image as a secular country has once again been seriously questioned by the US Commission on International Religious Freedom’s (USCIRF) Watch List for 2011. Does India’s inclusion in the watch list, alongside Afghanistan, Cuba, and Venezuela, in some way validate your thesis?

In the countries you have cited, it is either official policy to suppress freedom in the name of some greater good, or the government doesn't care much about countering attacks on religious freedom. In India's case, neither criterion applies. India remains a secular state constitutionally, though I have questioned the nature and quality of that secularism in my book. And its governments at the center and in the states, by and large, are conscious of the their duty to counter attacks on religious freedom, with some very distressing exceptions. India does not suppress freedom constitutionally but weak governance and political manipulation often generates severe threats to freedom. India is not intolerant, but some Indians, far too many, are.

Your book was released in India in April. How was it received, given that the forces you blame for breeding intolerance in India have been quick to call for bans on books?

Mercifully, no one has yet called for a ban on the book. Perhaps, that's because I have written about intolerance across the board and not about specific intolerant groups alone.

Liberal countries like France and Germany have openly declared that multiculturalism has failed in their countries. Some predominantly Christian countries that have embraced multiculturalism to an extent that even the term "Christmas holidays" is not considered acceptable, are now becoming more protective about "their way of life" and expect minorities to adapt to the majority way of life. Why should India be any different?

Because for India there is no alternative, in my view, to a multicultural identity. It has to be a salad bowl, not a melting pot.

The nations you are talking about in Europe are struggling with a growing presence in their midst of people from different cultural backgrounds, religions and ethnicity. The European nations were not multicultural to start with, at least they never saw themselves as diverse in composition even as they resolutely asserted tolerance. India, on the other hand, was born multicultural and multi-ethnic.

In some ways, the American approach towards national identity is more relevant for India. The US may not have seen itself as multicultural to begin with but today, as a nation of immigrants who are welcomed by those profoundly compassionate words on the Statue of Liberty, it is dealing with its diversity better than most European nations.

How do you define Indian national identity? Does such a thing exist with such socio-economic, cultural and religious divides?

Indians are fiercely nationalistic. When it comes to supporting the national cricket team or adulating a Bollywood star like Shah Rukh Khan, Indians lose their sub-nationalist identities. The trouble arises with a certain strain of politics. There are sharp political divisions along both nationalist lines — over the issue of which identity we should have as Indians — and along regional or caste lines. In the economy, however, a common market has developed and is strengthening rapidly. Almost all Indians entering the middle class in growing numbers don't want that trend to be reversed. As long as its structure supports tolerant diversity, India can survive as a nation, though growing inequalities can pose a danger.

How has intolerance affected women? Would a liberal society uphold women's rights over cultural norms which oppress women?

Continuing maltreatment of women, and their still secondary real status in society despite legal provisions of gender equality, is a major drawback of the Indian experiment in democratic nation building thus far. Some parts of the country, Kerala for instance, have dealt with the problem better than others. But across swathes of northern India women continue to be seen as a liability. A section of my book outlines this problem. Girl babies are unwanted in much of the country. As a result, the sex ratio has declined, most disastrously so in relatively prosperous states like Punjab, Haryana and Gujarat. Interestingly, the sex ratio has worsened badly among inhabitants of rich metropolitan areas like South Mumbai and South Delhi.

Hopefully, the situation will change with the emerging generation of young Indians, who are now a clear majority of the population. There are significantly more numbers of educated young women now, many of them thriving in professional careers, and traditional attitudes are on the decline. Women have begun to ascend the ladder of authority, though not in every field.

Regarding liberal tolerance of different cultural attitudes towards women, I think the status of women in a society determines its ranking on any genuine scale of liberal civilization. When you say that a society should tolerate, say, female genital mutilation, I would call such an attitude relativist, not liberal. Liberalism takes clear stands on behalf of its values. It must not be mistaken for an attitude of 'anything goes'. That said, I would argue that letting a Muslim woman wear a hijab in a public place can sit within liberal secularism as in America. The French disagree. Well, such debates over diversity and differences are what liberalism is all about.