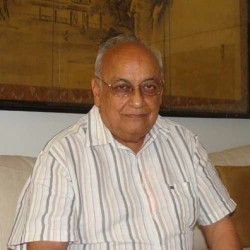 Prem Shankar Jha is an independent columnist, a prolific author and a former information adviser, Prime Minister’s Office (India). He completed his master’s in philosophy, politics and economics from the University of Oxford in 1961. After working for five years for the United Nations Development Programme in New York and Damascus, he returned to India to pursue a career in journalism. Over the past few decades, he has been Editor in The Economic Times, The Financial Express, and Hindustan Times, and the Economic Editor in The Times of India.

Jha has been a visiting scholar at Nuffield College, University of Oxford; Weatherhead Center for International Affairs and Fairbank Center for Chinese Studies, Harvard University; University of Virginia; University of Richmond and the Indian Institute of Management, Kolkata. He began research on alternate fuels in 1980. He has written extensively on them and their significance for the environment. In 1985, he was nominated to the energy panel of the World Commission on Environment and Development. In 1988, he was awarded the Energy Journalist of the Year award by the International Association for Energy Economics.

Jha has many published works to his credit. Some of them are given as follows: India: A Political Economy of Stagnation (1980), In the Eye of the Cyclone: The Crisis in Indian Democracy (1993), A Jobless Future: Political Causes of Economic Crisis (2002), The Perilous Road to the Market: The Political Economy of Reform in Russia, India and China (2002), The Origins of a Dispute: Kashmir 1947 (2003), The Twilight of the Nation State: Globalisation, Chaos and War (2006), Managed Chaos: The Fragility of the Chinese Miracle (SAGE, 2009), A Planet in Peril (2009) and Crouching Dragon, Hidden Tiger: Can China and India Dominate the West? (2010).