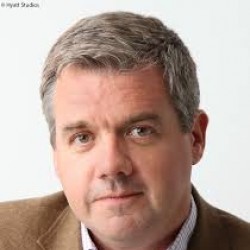 Living the Dream. Historian and author of an international bestseller - "Berlin at War" was #1 in Lithuania :-) - as well as a couple of other books, such as "Killing Hitler" and "The Wolf's Lair"

I would call myself a specialist in Nazi Germany, but I fear that would scare most people off, so I'll just call myself a writer of history books.

Enjoy - any questions or queries or just wholesome praise, do let me know...

What I’m Reading: An Interview with Roger Moorhouse

Erik Moshe is a freelance writer based in Northern Virginia.

Roger Moorhouse studied history at the University of London and is a regular contributor to BBC History Magazine. He is the author of many books including Berlin at War, Killing Hitler: The Plots, The Assassins, and the Dictator Who Cheated Death, The Devils' Alliance: Hitler's Pact with Stalin, 1939-1941, and is co-author with Norman Davies of Microcosm: Portrait of a Central European City. His Twitter handle is @Roger_Moorhouse.

What books are you reading now?

I'm glad you ask “books” plural! It's rarely only one. Aside from the half-dozen that I have open on my desk, at the moment I have Tim Snyder's On Tyranny by my bedside, along with Clare Mulley's new book The Women who Flew for Hitler - about Hanna Reitsch and Melitta von Stauffenberg – and The Pike, Lucy Hughes-Hallett's brilliant biography of Gabriele d'Annunzio.

What is your favorite history book?

Tough choice. There are numerous books that stand out for me: I thought Alan Bullock's Hitler was stunningly good, when I first read it 30-or-so years ago. Ditto Richard Grunberger's Social History of the Third Reich. I like history to have ambition and substance. I am a fan of Anne Applebaum's work, and especially enjoyed her early book on Ukraine Between East and West. My favorite, though, would probably be Neal Ascherson's Black Sea, which brilliantly combined travelogue, history and politics – and illuminated a fascinating part of the world.

Why did you choose history as your career?

I wouldn't say I really “chose” anything. I was inspired by the Revolutions of 1989 to return to education and went to do a history degree at the School of Slavonic and East European Studies, London University, to learn more. I found that experience fascinating; had wonderful lecturers and the subject matter was all very new and exciting – and so I just kept doing it: Masters Degree, researching, and then writing in my own right. To say I “chose” it as a career would be to claim a degree of planning and forethought that simply wasn't there.

What qualities do you need to be a historian?

Patience, honesty, imagination, an ordered mind – and for the freelance these days, ideally, an independent income! More than that, if you want to communicate your ideas to an audience, you will also need to be able to write effectively – a skill that is often sadly lacking in academia.

Which historical time period is your favorite?

“Favorite” is perhaps the wrong word, especially as the periods that I find most fascinating are often those that are most brutal. I have long been fascinated by the Third Reich, and that has become the main-stay of my work. It still fascinates me now. I also find the post-war European communist states very interesting – on a recent visit to Romania, I visited the balcony from which Ceaucescu made his last speech before the revolution. That was a treat! So, 1989 and the fall of the Berlin Wall is also something of a favorite.

Who was your favorite history teacher?

No one stood out at school, sadly. It was all rote learning and rather unimaginatively presented. I had a better teacher at A-level, who had a wry sense of humor and made it all come alive. Then, at university, I was spoilt for choice: Norman Davies was brilliant, as was Roger Bartlett, Martyn Rady, Rudolf Muhs... All experts in their fields and good people to be around. I never tired of listening to them and learning from them.

What are your hopes for world and social history?

As a discipline? I would like to see academic history freed from the shackles of liberal utilitarianism, but those forces are far too entrenched for anything to shift anytime soon.

More specifically, I think the Ukrainian revolution holds tremendous promise for giving us a glimpse into the darker chapters of Soviet history. Such areas are traditionally out of bounds, but with Ukraine detaching itself from its relationship with the Kremlin, there is the possibility that a cleansing light might finally be shed on areas of 20th century history such the Terror-famine of the 1930s or the NKVD terror. It is high time.

Do you own any rare history or collectible books? Do you collect artifacts related to history?

No, not really. A few odd things that I have picked up along the way, but nothing of real note. Regarding books, a reader did once send me a rare first edition as a thank you, but I am not a collector. I have thousands of books, of course, but it is a purely functional relationship.

What have you found most rewarding and most frustrating about your career?

Probably the same thing – independence. After university, I went freelance, initially as a researcher, and then as a writer. That gives you tremendous freedom; freedom to pursue your interests, freedom to take on projects that appeal. But that freedom and independence comes at a price; you don't have much of a professional network, you don't have institutional support, you are somewhat isolated. It's a double-edged sword, certainly, but I don't think I'd change things.

How has the study of history changed in the course of your career?

Hugely. On a practical level - when I started researching the Internet was in its infancy, and to find out even basic information you had to visit a library and consult the relevant book – imagine! This, of course, has had a massive effect. On one level it has made the process of researching and writing infinitely easier – information is there; barely two clicks away. But, on another level, this ease of information gathering has, I think, had a negative effect, in that knowledge itself has been devalued. With “fake news” and the fractious politics of today, maybe we are seeing that devaluation playing itself out.

More philosophically, history today is seemingly obsessed with its role and its purpose; whether it be the endless stream of politicians and commentators bleating on about “learning the lessons of history,” or the use of history teaching – and the wider liberal arts – as a tool in the re-engineering of society. I am probably in a minority here, but I don't think history needs to have a utilitarian purpose; I think the study of the past has its own fascinations and its own merits; it can stand alone, without the crutch of relevance. Our politicians don't talk about “learning the lessons of Chemistry,” or the vital importance of an understanding of physics; why should they do so with history? Of course, history has long been manipulated, used and abused – regrettably, this is just the latest example.

If you could sum up world history in one word, what would that word be? Why’d you pick it?

Chaos. Human life, and human history, is chaotic, it always has been and always will be. The historian's job is to take that chaos and try to give it order; to look for patterns, similarities, dissonances – and to present it all in a coherent, meaningful fashion. It is in many ways a wholly artificial process – that ordering – but it is what we do. Historians are chaos-wranglers.

What is your favorite history-related saying? Have you come up with your own?

Henry Ford's (supposed) “History is just one damned thing after another” always raises a smile. As undergraduates we had our own version, usually delivered with a resigned shrug just before an early lecture: “History never stops.”

What are you doing next?

I've just finished The Third Reich in 100 Objects, which was tremendously enjoyable to research and write – and, I think the end result will be genuinely insightful, for all its popular appeal.

The next project is a history of the September Campaign of 1939 – the German and Soviet Invasions of Poland, that opened World War Two in Europe – provisionally entitled “First to Fight.” There is so much to unpack in the Polish campaign – it rarely gets an airing, and is usually passed over in a few paragraphs – so I plan to do it justice. It should be published in 2019.