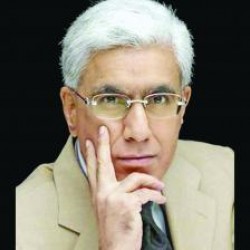 Karan Thapar worked for ten years in television in the United Kingdom.

After his return to India in 1991, he presented well-known programmes such as Eyewitness (Doordarshan), HARDtalk India (BBC), Devil’s Advocate (CNN-IBN) and To The Point (India Today). Presently, he is the president of Infotainment Television (ITV) and hosts a programme, Upfront, on Tiranga TV.