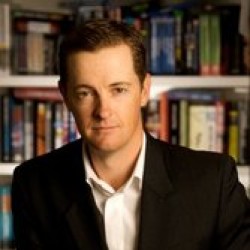 Published in over 20 countries and known for their highly visual style, fast pace and large-scale action scenes, over 7.5 million copies of his books have been sold around the world, more than a million copies apiece between Australia, the UK and the USA.

Some of his works have been optioned by film studios for series or feature production, and he continues to create works of fiction across all major media platforms, from short stories, through to novellas and screenplays.

Matthew's novels have also - unexpectedly - become a major tool in the fight to get teenagers into reading.

While written for a mature readership, Matthew's novels have become very popular with reluctant male readers.

This may stem from Matthew's own childhood experience, citing his dislike for set reading projects in high-school as his main inspiration to 'do it better'.

He wrote and self-published Contest in 1996 while just 19, deliberately aiming to have his book noticed by publishers who talent-scout at bookstores.

His dedication paid off, and was discovered by Pan Macmillan's then commissioning editor Cate Paterson.

His first industry-produced novel, Ice Station, proved so monumentally popular, that it had to be reprinted six times in its first two years.

The continued success of his novels has been attributed to not only the accessible, 'storyteller' style of writing, but also the highly charged and kinetic action sequences that take place throughout his works,

deliberately making use of his 'unlimited budget' of imagination to create scenes 'too big for Hollywood'.

Hi Matthew, thanks for taking the time to chat with us! Let's start with an easy one, what are you reading at the moment? I am currently reading Game of Thrones by George RR Martin. I’m enjoying it immensely. It is grand in scale, with a cast of thousands and a world that is brilliantly realized.

Barbara from Shearer's is always very proud to tell people that she stocked your first self-published novel (Contest, I believe) before you had a publishing contract. What was it like to put yourself out there when nobody knew your work?

Yes, Shearer’s was there at the very beginning, back in 1996. I can only wonder what Barbara thought of this skinny young guy who thought he had a bestseller on his hands!In all honesty, I guess I had the confidence of youth – I felt Contest had the goods, and that if I tried hard enough, it would be spotted.

I like to think that one of the reasons for my continued popularity is that I had that initial “failure” with Contest. Success didn’t come easily. I had to put myself out there to get it.

Can you tell us about your new novel, Scarecrow and the Army of Thieves?

The new book is an absolute rampage from start to finish! It is huge, explosive, scary, and filled with big character moments – the kind of novel that fans of the Scarecrow have been waiting for since 2003.Readers have been asking me for some time if I would be writing a new Scarecrow novel, but I had to wait for the world to change a little.

I didn’t want to send him to Iraq or Afghanistan to fight terrorists or oil dictators; for me, a Scarecrow book has to be about “the balance of world power”; nothing less than the fate of the world has to be at stake. Scarecrow and the Army of Thieves is set in the Arctic, at a remote, ex-Soviet weapons base that has been seized by a mysterious group calling itself the Army of Thieves.

The Thieves are about to set off a top-secret weapon of terrible destructive force, and since they have a missile-defense system, the call goes out to find any troops in the immediate area who can stop them in time. Our friend, Scarecrow, happens to be in the Arctic, with a civilian equipment-testing team…and so he goes in against totally impossible odds.

This is the first full-length Scarecrow novel since 2003, was it challenging returning to the character, and had you always planned to return?

Scarecrow (and his loyal friend, Mother) is a lot of fun to write about, so I always planned to return. But as I said above, I needed the right global environment, and as the first decade of the 2000s came to an end, the right story came to me (I won’t mention what that is, as it is the key plot twist of Scarecrow and the Army of Thieves).

It was more enjoyable than challenging. Having spent the last six years writing the Jack West Jr series, it was nice to return to Scarecrow. There are several key differences between the Jack West Jr and Scarecrow novels: the Jack West books are adventures, with heaps of action and thrills but with a sweeter heart behind them (think of Lily and Jack’s relationship), whereas the Scarecrow books are full-tilt thrillers, rocket-paced, with a much harder edge to them.

What do you hope readers take away from Scarecrow and the Army of Thieves?

This book is about Scarecrow’s character. After putting him through hell in 2003’s Scarecrow (including the now-infamous “execution” scene) I felt that readers would like to know how he dealt with the terrible events that took place in that book.So, in Scarecrow and the Army of Thieves we find out exactly what he did.

That said, he’s going to do that while facing the toughest villain I have come up with yet: the Lord of Anarchy, the leader of the Army of Thieves, a man who may be perfectly suited to battling someone as emotionally damaged as our friend, Scarecrow.

How do you incorporate your writing into your daily life?

I like to write hard on Mondays and Tuesdays…and then play golf on Wednesdays. Since writing is very solitary and a rather “indoors” pursuit, it’s good to get out in the fresh air and socialize.

Then, if I’m in the zone, I’ll write hard again on Thursday and Friday, and maybe golf again on the weekend. The result: the books remain top notch and my handicap has come down as low as 4! (I also try to get out with my wife as much as I can, too!)

Has your popularity overseas given you more opportunities to travel, and if so has that been an influence on your writing?

I did a lot of travel while researching the Jack West Jr series, Seven Ancient Wonders, The Six Sacred Stones and The Five Greatest Warriors. I have visited Egypt, Stonehenge, China, Easter Island and even Table Mountain in Cape Town.

While some other authors get researchers to help them with research, I like to do it myself – it’s half the fun of writing a novel, as far as I’m concerned! In recent times, I visited Istanbul, perhaps for a future book….!

Luckily for me, writing for myself is the same as writing for my international audience, because I like to think that I am my audience. I’m the kind of guy who would go out and buy “a Matthew Reilly book”: I see and enjoy lots of action movies;

I love murder-mystery TV shows with lots of twists; and I love thriller novels. You can’t fake this sort of thing, and I think it comes out in my writing. Authors who try to write something that they themselves don’t love are destined to fail. You can’t fool the audience.

I read that you own lots of cool movie memorabilia including a life size statue of Han Solo frozen in carbonite. Is there something in your collection that you prize the most and is there a 'holy grail' that you're looking for?

Han is pretty cool! He hangs on the wall of my office. My Jingo Fett helmet is great, too, but I guess my most prized movie collectible is my DeLorean car, made famous in the Back to the Future movies.

Since DeLorean’s were never released in Australia, you don’t see many down here, so my “D” has some serious rarity value.As for a “holy grail” item, hmmm, that’s a tough one to answer. I guess I’d like to get a toy from a movie that was based on one of my books – a toy based on something that originated inside my head!

Speaking of movies, I keep hearing about your books being optioned in Hollywood, is there a film based on one of your novels on the way?

It’s a long process, since my books would be so expensive to make (lots of special effects and exploding objects). Hover Car Racer is still with Disney, and I wrote the first draft of the screenplay for Scarecrow (which the film company would like to be the first film in a Scarecrow series; if it succeeds, they would then make Ice Station).

I’m pretty relaxed about it – chiefly because I write my books first and foremost as books, not movies. I want them to be enjoyed as books. The stories that I write as original screenplays (like the TV show I sold to Sony, Literary Superstars) are a different story: I would like to see them produced, as they are designed to be enjoyed on a TV or a movie screen

Which movies have impressed you recently?

I have thoroughly enjoyed the last two Batman movies, Batman Begins and The Dark Knight (I particularly loved the Joker’s scene where he made the pencil “disappear”; a great scene to see in a full cinema).And I really liked Red Dog. I think it is the best Australian film since Strictly Ballroom. It is written well, shot with skill and originality, made with a decent budget, and what an ending!

I’m working on relaxing and chilling out! I need a break. I am thinking of pursuing a film project, a big sci-fi story that I like. But I can’t say too much about it at this stage! In the end, I hope you all enjoy Scarecrow’s long-awaited return in Scarecrow and the Army of Thieves.